Riptide GP: Renegade is an aquatic racing game that features a wide variety of modes across some awesome arenas. The game has been available on a number of platforms and finally heads to the Nintendo Switch while basically being the whole package. Taking a futuristic approach to things the levels have some distinct and unique environments with all sorts of great little details going on in the background. The campaign starts off simple providing a number of modes to teach the basic mechanics and then you're set free to go from there. Each section of the lengthy campaign has a three star system with a layered RPG element behind it so no matter how you do, you're always progressing.

The stars allow progression though it never felt like you were particularly locked by not always achieving first place and eventually you do get there by upgrading your vehicle. There was a solid amount of variety in terms of maps, modes and boss fights to complete within the campaign. On top of that there's a Challenge Mode featuring multiple variations on existing game types where you're aiming to get the best possible score. The game also has a quick race mode where you can just hop onto whatever map or game type you'd like. This is rounded out with an online multiplayer mode to race against seven others in matchmaking or splitscreen that supports four local players. 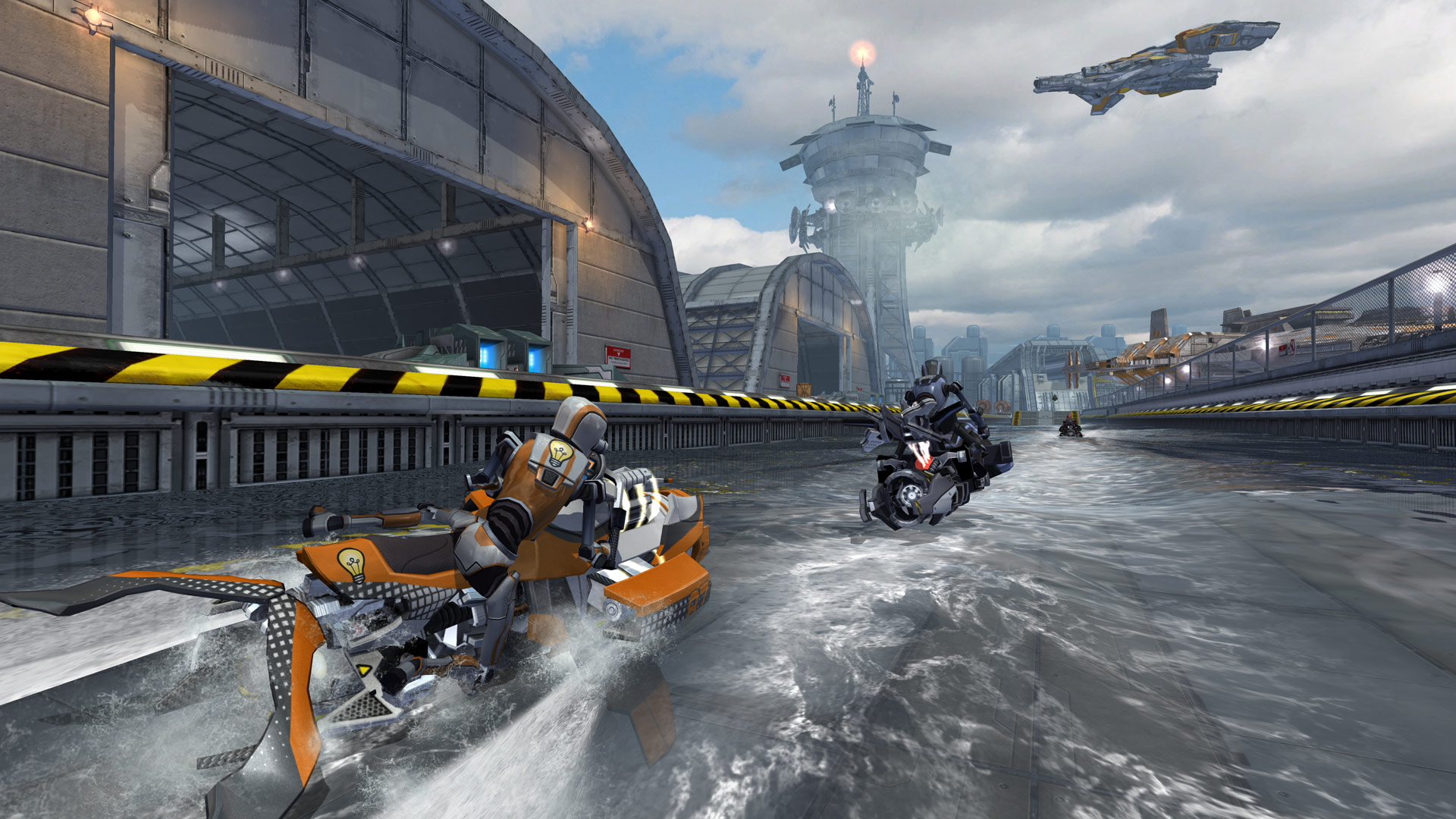 Riptide GP: Renegadeis similar to your standard racing title with a linear track focus as you race along the rippling water. There are a number of jumps present as well with some crazy heights or other neat takes on traditional race mechanics as it's futuristic. Tricks are actually a big part of winning as you gain boost by pulling them off and there's a wide range of them available with more to unlock through earned skill points. These points are unlocked by leveling, though not the only way to advance. The second part of getting better is just playing races where you earn cash. The cash allows you to buy more bikes and upgrade the existing model you have to make it compete better.

Another great improvement with this iteration of Riptide GP is the amount of customization present. You can choose a custom rider; change the bike color scheme, select a decal and also choose a number to associate with. When it comes to visuals I did notice that the experience is largely the same though it does have some performance problems. The levels have a number of random objects that will show up as you race by them defeating the point or having slow far distance rendering. It takes away from the immersion and I've seen similar racing titles on the platform have this problem as well. The game looks decent while docked, but really shines when it's on undocked looking quite sharp.

Riptide GP: Renegade is really an enjoyable aquatic racer that packs a pile of content. There's also a good selection within the content presenting some solid creative maps and unique game types to compete with. For those that like to play with others it features a full online area and a decent local splitscreen option. The racing was also quite fun providing a fair challenge while still allowing you to feel victory. The bikes offered a solid selection of customization and upgrades to make it have a distinct style as you unlocked more things to tweak it with. The campaign offers a great selection of content to play through while having a fair star system and there are also a number of other areas to play if you'd like. On the Nintendo Switch it runs fairly well, there are some graphical issues though still a great water based racing title.