Stellar Overload is a title I've been waiting to try for such a long time, originally titled Planets³ the game has received a recent name conversion and a press alpha I've been able to test out. The game is a voxel heaven featuring a number of dynamic shapes that come together to create one of the most enchanting environments I've ever played in. As you can see in the screenshot included or the video if you just want to see my impressions there, the world looks fantastic. There are massive mounts accompanied by sprawling grasslands filled with flora. It's got incredible density even within just the small area I explored with large trees, tons of plants like shrubs and flowers along with smaller critters running around on the ground. Everything looks great and flows so well with the environment which makes everything feel much more natural. This is of course just within the one area, while I explored I came across many differing biomes with smooth transition between each of them. Back on track, this impressions is created within my time playing a press version of the Stellar Overload Alpha. 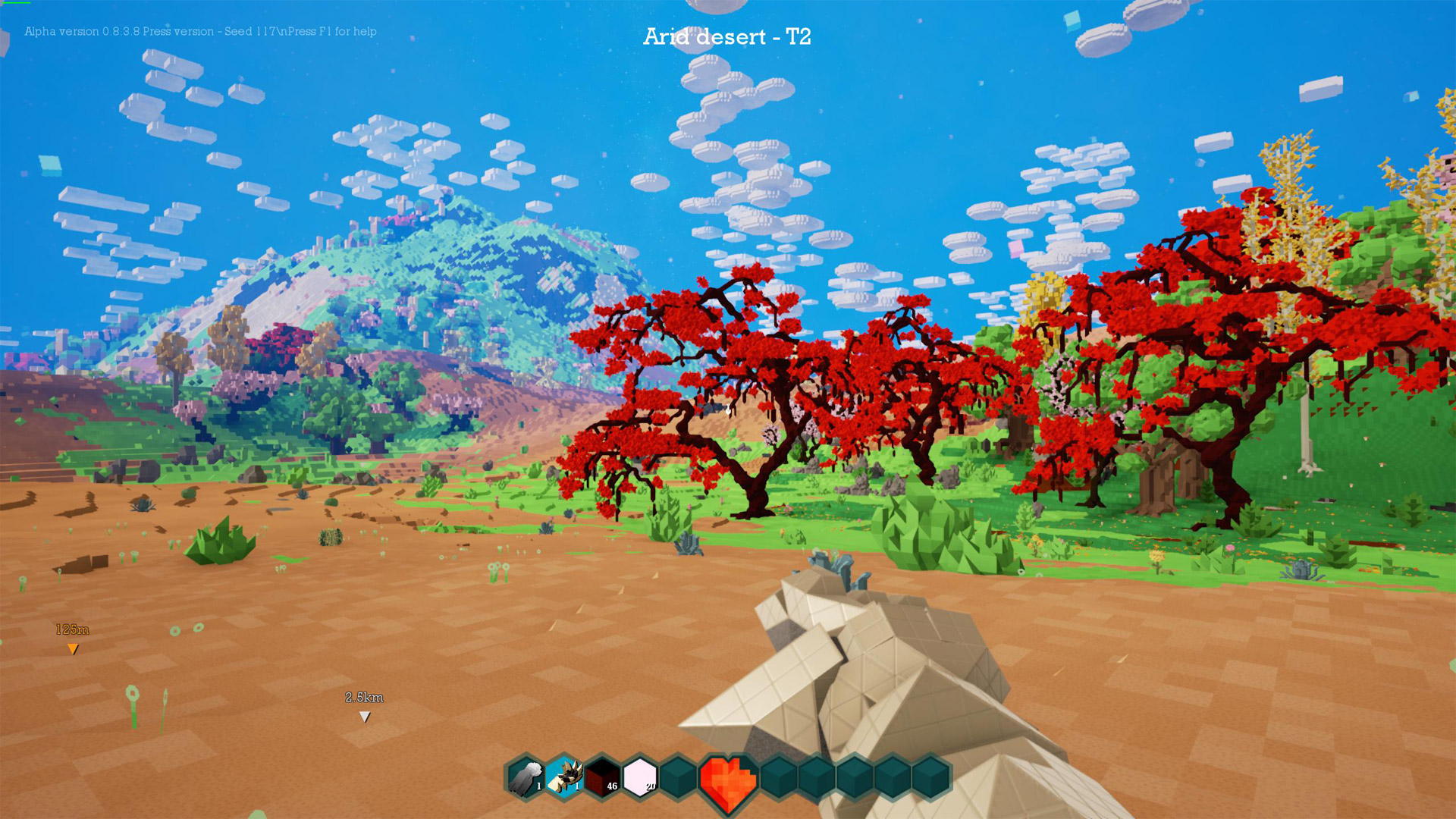 This alpha has a given us a simple task of recovering these secret plans which have been placed within a tree a few Kilometers away. The task can be completed by killing the Arkuloids or by just doing a run in to grab the plans and flee. As you can probably guess from my opening block of writing I was a bit more interested in exploration than the quest itself. The Arkuloids are these little robotic cubes that attack you in great numbers so my first brush with them was quite unexpected. I was curious given the different design of them and they certainly startled me and took out some health. In order to defeat them I would need to craft some better weapons and tools. Currently in the build this is accomplished by correcting recipes in unknown structures and then grabbing resources to create these. While it was cool, I'm unsure if I like just finding these recipes within open structures as it could repetitive fast though I believe it's in the plans to create a different system in the future.

Another great feature present within this build was a jetpack which made traversal much easier. With that being the case I feel there needs to be some more feedback from the thing as I found it hard to judge distance versus health loss causing some splats with the ground. Still, having the jetpack was great as I would at times just fly straight up into the sky and look around the massive landscape. The next topic I want to discuss is the building system which is where I believe this game will have the biggest draw. I really hope they focus on survival aspects with certain things you can opposed to straight up missions as it will most certainly capture the Minecraft crowd. It's got a really simple and well done building system that many will find appealing. It's as easy as picking the right glove, digging the ground to collect blocks and using them build in cubes. It works well and people could create some really beautiful structures given the colorful nature of the world and how the building system is setup. There are also apparently some easier to build with items like doors coming down the line and with some pre-fab structures this could be a builders dream. As long as they keep it simple it should work well and in regards to the current crafting system it might need to be tweaked to a slightly better readout. I might have just not spent long building anything as I was exploring, but it did have a daunting look to it in figuring out exactly what I need to create the items. That's about as far as I'll dig into the game at this point though it's looking promising, there's multiplayer present in the game though I couldn't quite get that going so I decided to exclude that element for a later impression and if you're looking for more information I'll include some links below.

Impressions Made on Stellar Overload during Press Alpha on PC