Interview with Michel Thomazeau, from Cubical Drift for 'Planetsł'

Here is an interview on the upcoming game called Planetsł which is currently in Kickstarter of which can be found through a link below for additional information.

To start off from what I have seen Plant3 looks absolutely beautiful, in terms of design where did the inspiration to go with this art style come from? :

We wanted a game that bring joy, colorful landscape bring this kind of well-being atmosphere. The inspiration come from different RPG or adventure game like Zelda.

Will there be a large variety of characters and or wildlife to come across during these travels? :

We want to have a real consistency with landscapes. They will be generating depending of altitude/longitude/latitude. You will face different landscape that you could discover in our own planet Earth but also “alien” landscape for other planets. Caverns will have different ambiances too, as a big part of the adventure will take place in depths.

Will we be heading back to Asposia anytime soon with a direct sequel or maybe a completely different story?:

Every landscape will come with its own wildlife. We want to have a real diversity in the progression of the adventure

How dynamic will the world be in terms of changing, such as planting trees to see them grow or effects on living in this landscape?:

Planting trees will be possible, as seeing animals grow. It’s a little too early to talk about others dynamic effects over the fauna and flora.

I noticed that there seems to be a large number of weapons or tools, could you perhaps elaborate on the uses and tell us about a personal favorite? :

Indeed there will be a large number of weapon and tool; it is all about bringing diversity to players, which will choose their way of fighting without being restricted by the game. My personal favorite will be the high tech guns, firing plasma for example.

I also noticed vehicle construction, how advanced or simple will this tool be when building it? :

There of course will be combat, how strategic will enemies be in facing the player. Will there be PVP for players to show off their skills and how will this work into the RPG aspects? :

Enemies will be smart and can fight in groups or help each other’s. PvP in the first opus will be simple, but we want to create a better PvP system in the second opus, where players will be able to control zones and defend them. Co-op will be the multiplayer feature of the first opus : to complete the storyline in multi.

There is a technical level, would this be terms of a level or gaining experience within the world? :

No, the technical level is directly link to the items you can create. It’s something you will be able to improve by finding new resources and research new recipes (with the Job Masters)

How in-depth of a crafting system will we see aside from vehicle construction? :

As the game in based on a voxel world you will be able to build everything you want with our small blocks. And the item crafting system will allow players to import their own 3D models, allowing them to get “the” sword they want to play with.

I see the project is on Kickstarter, could we get a quick go over on what the stretch or overall goals are for Planets (Cubed)? :

The higher goal is the game we dream of, space combat, advanced spaceship craft, and space enemies! Sure we will deliver a RPG, but players will be able to create their own universe, fixing their rules and story, with advanced PvP combat. We have “smaller” stretch goal for bringing the game to mac/linux, even console. Others add new features for the game.

A final question on how much the multiplayer will effect gameplay and just how many friends can you have around in your world? :

Planetsł will not be a MMO, we want it to be a game you play with your friends. Playing the story in multi will be much more fun and easier. Each player can choose his specific way to fight, and a balanced team will be unbeatable. It’s too early to talk about numbers and servers limitation.

There was a ton of items to cover and I hope I pointed out some good keypoints, if there's anything else you would like to mention feel free to give a final note! :

You did! Planetsł is all about bringing a story over a voxel world. We need more backers to make this project a reality, so do not hesitate to visit our page!


Thanks for taking the time to answer our question about Planetsł and I look forward to hearing about future advancements on the project, the kick starter can be found here and their site can be found here 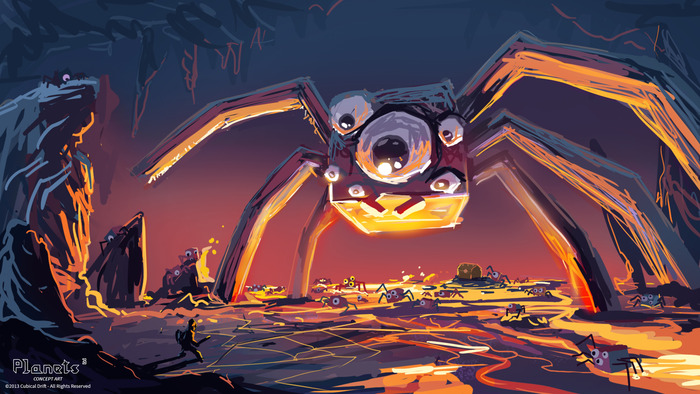