I've been working through Assassin's Creed: Origins and since there's so much to do it's taking some time. One of the most distracting things during this time has been the world. I've been really impressed by not only the depth in content quality, but the scale of it all. It's amazing to see such a large scale experience that's filled with life performing so well. After Unity a couple years back I wasn't too sure on my future in the series, but I do love ancient Egypt. With that aspect, this game is perfect. It truly does capture that authentic feel of the era and the large draw distance really helps that.

You can sit from most places and see thick palmed areas and pyramids or mountains sticking over the horizon. It's incredible, the world itself as I was told by a developer at Pax West 2017 is the size of Black Flag, but land. While a lot of this is desert, which I found gorgeous as well there are many cities to tour. These cities are just amazing and I'll dig into that in a second. There are some large bodies of water to move through and these carry just about the same amount of content as land, best to watch for things that swim faster than you. Going back to the dunes, the adventure across the desert is just as charming as moving through a bustling Egyptian city, you make marks in the sand and just enjoy the haze of this almost endless horizon. It's magical, oh and for reference the image below is on a standard Playstation 4 with that draw distance being wonderful. 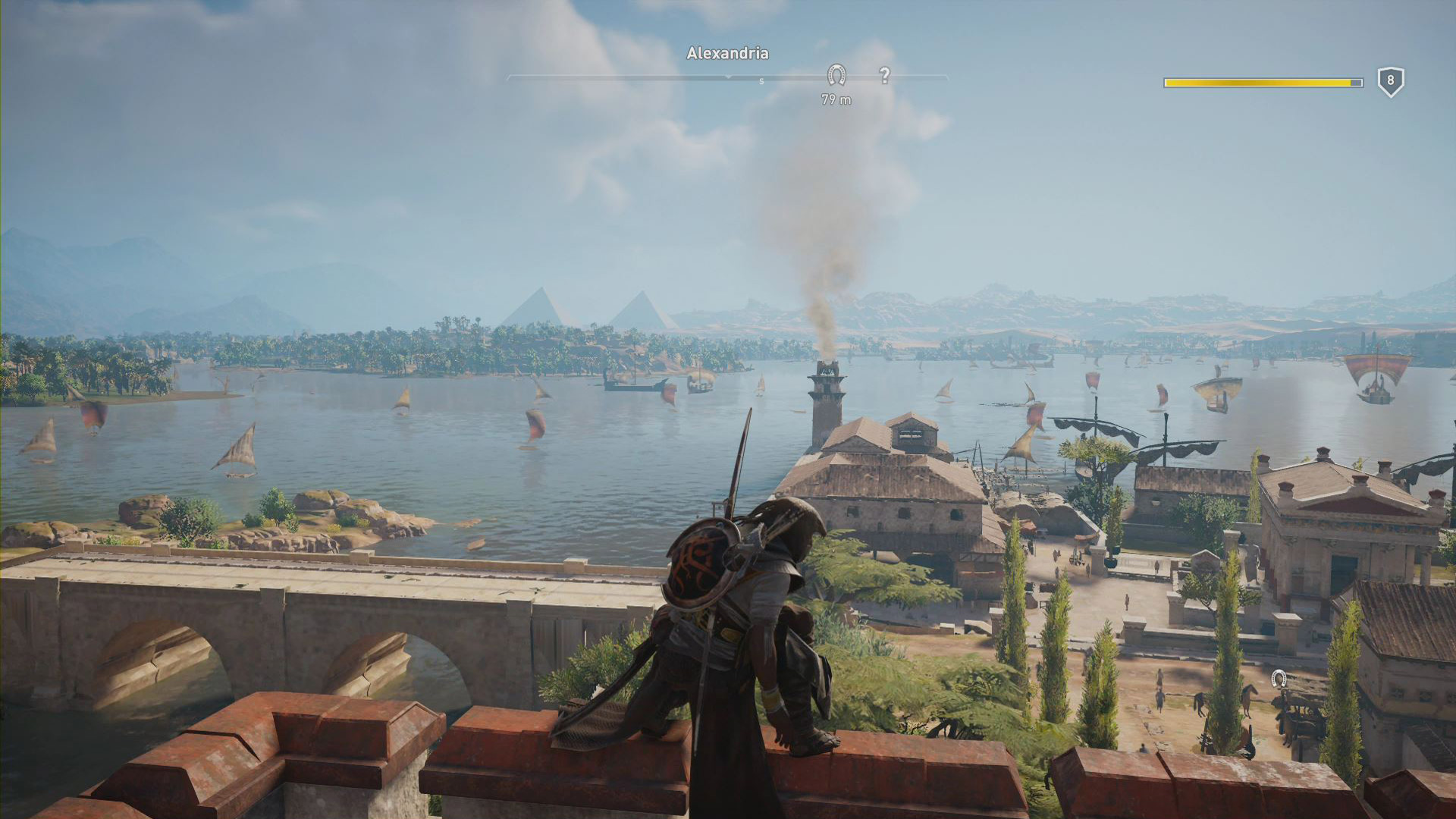 When it comes to the cities, they're just packed. Not to the level that caused the horrendous Unity issues, but they feel lively and full. You get packed markets, flowing boats down mid-town streams and carts being pushed around. It feels like a regular place and that creates a sense of a real world. I'm also very impressed with the easy movement, considering the smaller focus on verticality there's lots to climb and move through quickly. You can still run swiftly across regular houses, scale fortresses or even tackle a pyramid if you're bored. For those wondering about the old school Creed aspects, hay bales and special jumps do return. The cities are also full of shrubbery, smaller pools of water and tons of detail. You can run through temples, see folks interacting with their gods or walking by doing a chain of activities. The interiors are stuffed with smaller items and it's been impressive. I was even more surprised by how dynamic the NPCs are with how they go about their activities, just looking over a market for awhile you see so much change in their pathing.

I also love how the world cleanly transitions through periods of the day and how easily the soft light of the torches or fires within the world come out. While these aspects are great for making the world feel authentic, my absolute favorite aspect is the stone work. Aside from the greatly detailed and many climbable block options they provide, the artwork is insane. There are walls of unique hieroglyphics everywhere and this are matched by lovely statues. The statues are always amazing when you see them, but there's some about the hieroglyphics that's just next level. Being a fan of the historic era, seeing these everywhere is just so cool and I often stop to just take in the sight of them. Assassin's Creed: Origins has been great, I really felt that I should take a second from it talk about the incredible and beautiful world that it provide.