"This is an Awful Party"

I can't believe that Mario Party has hit its tenth entry already as I remember playing the originals so many years ago and this latest entry is just awful. It's almost dreadful that the series has gotten to this point and I was hoping this latest party may try to capture some of the magic again. It was quite disappointing right away and only got worse the more I played it with growing numbers in my family. The biggest issue is shown right off the start with the group cart system which drastically cuts down the game time and individual experience of moving along the gameboard. Perhaps even bigger than this is the requirement of the Wii Mote in order to really play anything in the game as the gamepad only controls bowser which is incredibly overpowered in this. So powerful to the extent that it's almost impossible to survive his onslaughts and fixed mini games. You can also actually die, my family is grown up so no big deal there. Yet imagine having a group of children playing this and one has bowser which is constantly killing/ruining the party for all the others. These core aspects are just the root of the problems which stems out quite further. There's a huge lack of content in this game, you get four maps. Within these four maps there's a small amount of spaces and basically just not enough mini games. While great when you do land on one, it seems the only way to play a decent amount of mini games in a level is to have bowser chase you. It just really seems to lack any of the core elements which made this party so great for so long. You can buy more content from coins like characters or the team raft, but that's also a pitiful area. I pray free DLC gets released at some point for those that actually bought this, because I'm going to get rid of this game asap.

Nintendo struggles dearly to do HD titles, and it's ever more apparent with their many delays. Mario Party 10 looks ugly, you can see graphic lines and many of the textures are pixelated. Compared to Pikmin or Mario Kart 8 it leaves me to wonder where quality control was on this. It almost seems like it was ported from the 3DS for some reason whenever I was playing it. The actual controls though were smooth with the motes of gamemode with some creative uses like blowing the gamepad (haha) to create flames against the other players desperately looking for an impossible escape. The controls are also very simple for people to understand, yet I don't know why it keeps reminding us to hold the remote properly. Everything was just very dull and completely lacking in content.

This is the worst party I've ever been to and I hope they start from scratch in future adventures. While it retains the original characters I felt as sad as Yoshi when he was losing hearts as the game just seemed so bowser focused it was unreal. The worlds are dull and void of that usual party feel along with just ugly compared to their other titles. While mini games are cool, they've very scarce to come across as the game constantly tries to force the bowser element on you. I would honestly suggest pretending this title doesn't exist and save your money, it isn't worth any price. People that enjoy Mario Party and fans of the console which I no longer am deserve better than this for all their waiting. 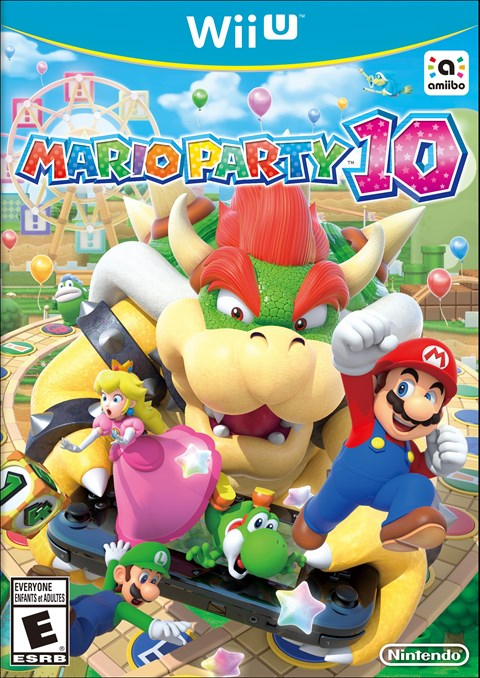 Review Done on Mario Party 10 for Wii U