"HD Karting at its Best"

After a many years, almost a decade to be more precise I have come back to playing Mario Kart as the last entry I owned was Double Dash way back on the Gamecube. So from that point of view I've watched other entries come and go as I really have switched consoles from the reign of Mario titles. So coming back I am mostly impressed that at the core Mario Kart 8 feels like previous entries as it should; but adds some customizing, really well designed maps and beautiful HD graphics. My favorite character to Kart with was always Bowser, so that of course is my main character this time around and he looks really stunning with these graphics. Onto the story and such, everyone in the Mario universe is karting around for some reason. That basically sums that up, the campaign is split into multiple differing tours that range from the Star Cup to that Special Cup, featuring a number of races in-between. The placements are then tallied up at the end of each round for an overall winner to be crowned. It's a simple style and works really efficiently, there are also differing CC's so that handles how difficult the racing will be. When finishing these races you will unlock new characters, kart pieces and other minor things to change up your racing. Also those AI really like to cheat at times and can be quite aggressive. What's really different this time is the large amount of maps and the close play style where AI keeps competitive against you, never being too far behind. This keeps it relatively close and doesn't leave a lot of room for massive leads. The worlds or well race tracks of Mario Kart 8 look absolutely amazing and play just as well. Whether that be humble remakes or fresh tracks, they each bring some wild area alive and have really alive outside areas. It's just a refreshed world all around with a great number of cups for you to seek out and race for.

I'm quite surprised at how great the multiplayer works as the online functionality for the Wii U is the absolute worst. Playing against a large number of others, you can go in solo or with another local member as you either race it out with mass chaos or do the battle mode. The battle mode is really awful in this one, it's fun in play. Though what I mean is that no maps seem optimized for it and you just go around on regular maps zooming around hitting each other. This seems to be quite the oversight as that mode can definitely be the most addicting as I remember playing it a lot in the past. The VS works perfectly online and some of those players can be really good, just wish I could be talking to people like other multiplayer games through a voice chat or something. You can also take the multiplayer local as you have always done in previous games which is quite a blast.

Everything runs smoothly and the controls are really spot on for Mario Kart 8. Will complain that use of the game pad is really awful as it really is just useless for this only presenting a map of the course from which I never look at as I'm looking at the big screen. I guess you could say it's a missed opportunity, I just think for future times I'll plug in my pro controller instead. The system of collecting powerups is quite the same as it's always been as you go about getting them at certain moments and unleashing a dark hell upon others that are racing about. It somewhat sucks that when you're in first place you only seem to be given coins and nothing to assist you when the enemy AI blasts you away two feet from the end. So ya overall everything runs smooth and looks stunning.

Mario Kart 8 is a great reason to turn on the Wii U for a bit to go all out in classic and new maps. All your favorite characters are here and the world is just easy on the eyes with those stunning HD graphics. Though it really is more of the same game you've been playing for years already and lacks in some of the multiplayer components. Mario Kart 8 is a great game, you'll spend hours playing it and you'll still have a blast with friends in local play. Even if you have none locally you can still fire up the online to compete with others everywhere else though it just lacks some sort of social feel due to the Wii U's online network. Hit the tracks and conquer the amazing Rainbow Road (along with other tracks) once more in beautiful high definition. 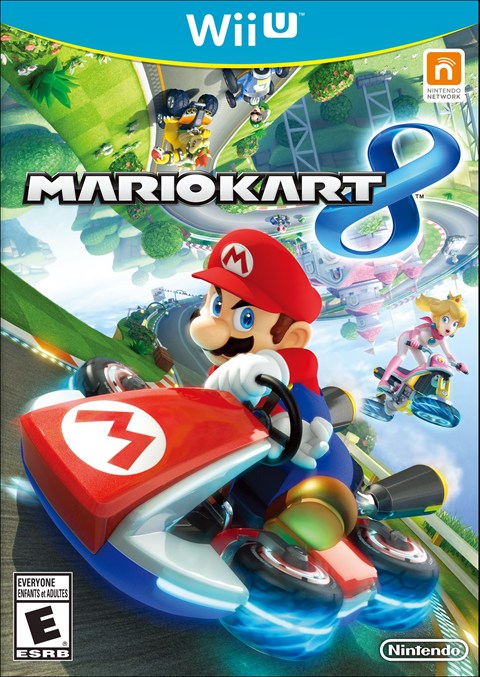 Review Done on Mario Kart 8 for Wii U