Jaakko: We currently have 13 games in Steam and on current gen consoles. Core gamers know us mostly for our twin stick shooters like Crimsonland, Neon Chrome, JYDGE, and Tesla vs Lovecraft, but actually our casual/puzzle games like Sparkle 2 are pretty much as popular based on sales numbers.

Where did the concept of merging Tesla in a conflict against the Lovecraft universe come from?

Jaakko: We think it’s a really cool concept, and it took a while to put together. Originally we started the game with a generic mage or wizard character, and over time that evolved into having famous scientists be the heroes. We were pretty much a year into (pre)production until we distilled that to just having Nikola Tesla as the hero, and that quite naturally flowed into having just one villain too. Lovecraft, or rather his brand of madness, quickly came up as a suitably polar opposite.

This is a great twin stick shooter, what core features were desired when working with this type of genre?

Jaakko: The game concept started as “something very Crimsonland, in 3D”, so we already had a great starting point. We knew we were making an arena type shooter, and we knew we’d make the levels have architecture, and we knew we were going to use similar perks and powerups system as in Crimsonland. That’s all tried and true stuff, so all we had to do from then on was to figure out one or two cool new things. They actually came to be quite easily; the Quantum Teleport goes great with the level architecture, it’s basically our version of a dodge roll. The Tesla-Mech on the other hand was born out of realization that hey, we have pretty cool and intense action going on here, and it’ll only get better if we pour more fuel to the flame. 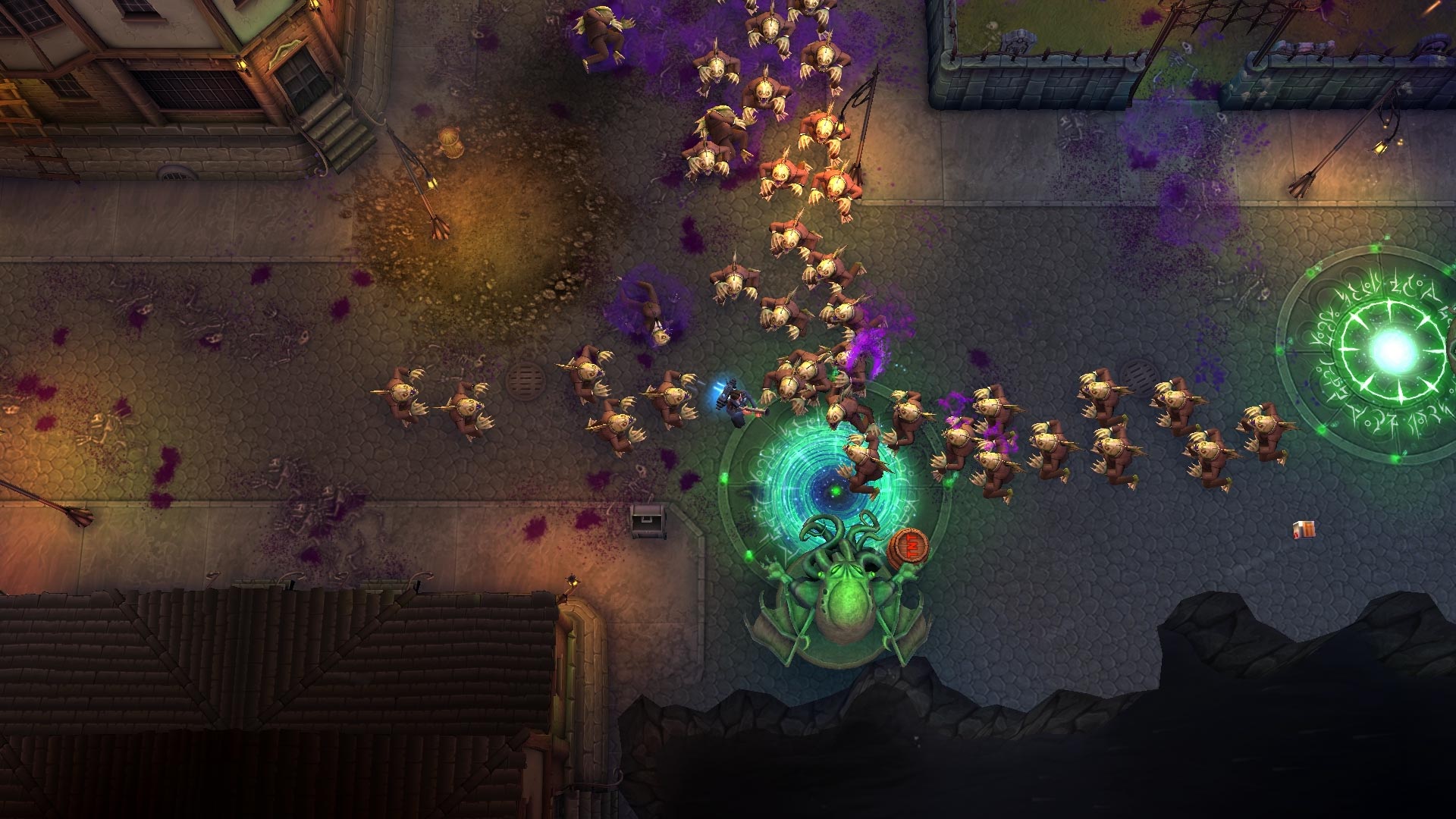 The game is noted as being available on essentially all platforms, is there a lot of work involved with porting the title to so many places?

Jaakko: Most people would be surprised to hear how little work there actually is, but there’s a very good reason for it too. We’ve been doing this for 15 years, with our own engine and technology, and for the past 10 years or so we’ve developed our tech very much with multiplatform distribution in mind. So we’ve spent years and years on making our tech, and games, so that it’s all as easy to port as possible. Typically it takes about one week for one developer to port a game to any single platform, and a lot of that is spent on hooking up platform specific features like achievements and online leaderboards. Mobile requires a bit more work as we need to create support for touch screen controls and optimize a bit, but overall we’re very happy with our multiplatform tech.

The Xbox One X enhancement for Tesla vs Lovecraft was great, what was the process like there and did you feel the premium Xbox console delivered adequate performance for what the game was aiming to achieve?

Jaakko: The one sort of downside of publishing each game on everything from a $150 Android phone to the latest 4K desktop or console is that we don’t have a very feasible way of fitting the game perfectly for devices on both ends of the horsepower spectrum. The “natural” space for something like Tesla vs Lovecraft is probably somewhere between Nintendo Switch and Playstation 4, so for Switch we had to downgrade a couple of tiny things and on PS4 we have some power surplus.

So when we go to PS4 Pro and Xbox One X, what we can do is simply raise the resolution to native 4K and support that with accordingly high resolution textures. There’d still be power and features like HDR and higher fidelity particle effects, but we’d have to create those from scratch for these platforms only, and there’d be practically nothing in that that we could use on lower spec platforms. However, we are looking into HDR support, as it’s becoming more common.

Could you go over some of the core features and what distinct aspect of gameplay you feel would most grab a player’s attention?

Jaakko: It’d probably be the Tesla-Mech. There’s always a mech piece somewhere in the level to be collected, and after collecting six you can activate the Tesla-Mech. It lasts up to 20 seconds and boosts your firepower a ridiculous amount. It’s just a really awesome feeling to tear through even the most massive horde of monsters in a couple of seconds. 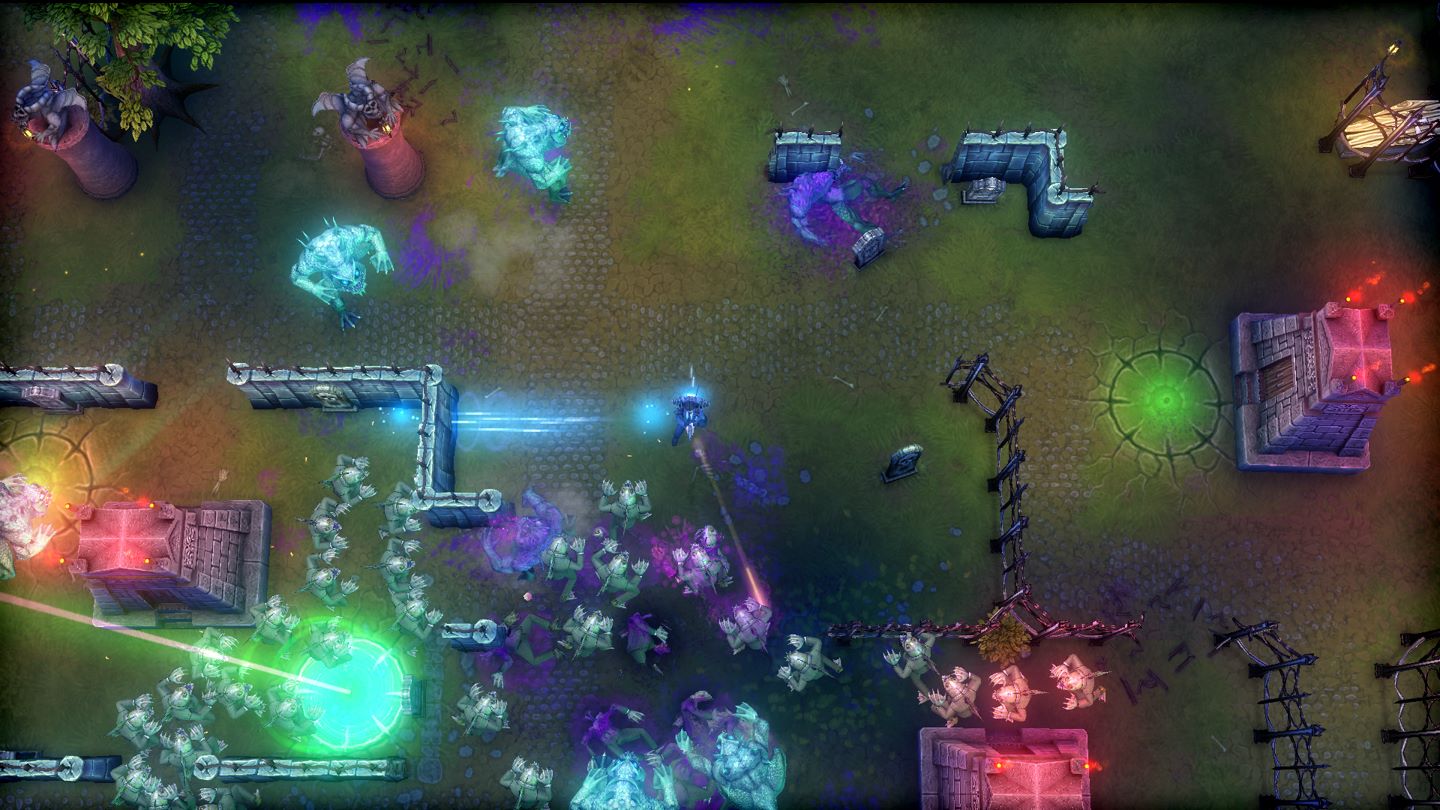 The game can be experienced with four others locally, did you feel this was an essential addition and was online coop considered during development?

Jaakko: Local co-op has been a staple of our twin stick shooters ever since Crimsonland. It’s relatively easy to implement technically speaking, and it’s an increasingly rare feature these days. The audience for couch co-op may not be massive either, but it’s always a hoot, so we include it.

What is your favorite enemy in the game and what quality makes them distinct to take on?

Jaakko: I like the Shoggoths. Lovecraft displayed great imagination in both naming and describing his creations, and particularly the Shoggoth in Tesla vs Lovecraft, for me, looks the part. It’s also one of the bigger enemies, and crucially one that actually shoots back, so there’s all kinds of attention grabbing qualities to them.

Jaakko: I’d like to thank everyone for playing Tesla vs Lovecraft! Based on the sales numbers for the first weeks and months, it’s our best selling game in several years. We’re really happy to see people enthusiastic about it.

View our Interviews Hub
View our Tesla vs Lovecraft Review