After many months of using Xbox Music and actually having my streaming set up until 2018 I thought it was best to write a review about the service at this point in time. My review covers a wide range of devices which I've used the platform with to create a rounded opinion on the overall experience I've had at this point. I also understand the service will be getting a name switch up in the future, at least on the Windows 10 Music area to just be called music so just transfer that over to what I'm saying. Anyways, after this initial setup I use the music service every day. Whether that's when I'm moving around the house on my tablet, listening to it on my phone before I go to sleep or while I'm working like right now when I write up this review Vampire Weekend is currently streaming. It's actually all fantastic and works with minimal hiccups like occasionally an author page won't load or a song won't stream. Then you just refresh the browser or click the song a second time for it to stream properly. I will also comment that while the service has a mass amount of artists and songs available there are still certain largely popular groups that are not present on the site or some have certain songs blocked off which is disappointing. The most obvious would be Taylor Swift which had all her songs on there for a bit awhile back, though I still believe some of the older ones are still available to stream. The simplicity of selecting songs or artists is great and all the usual functions from other music players are here. You can see the first screenshot below which gives a look at the browser view and also the Windows 8 styled app which I've also used in Windows 10 while on technical. It all works quite well and looks very smooth with a grand modern feel.

So we have the search area which allows us to have three lanes of options when we've looked for something. Using "Lights" as an example since I wanted to listen to Ellie Goulding you can see artists on the left; albums in the middle and finally songs on the right. Most of the time it gives me exactly what I'm looking for and presents this data beautifully. Maybe the background could use some better flair since it's a basic background and even listening to music it just works along the bottom without any visual component. The collection are is next where your existing music is synced from the computer or in your cloud storage on the OneDrive. This keeps everything you own readily available to stream even if you don't have a pass and you can even add music that you like from Xbox Music to it with a subscription pass. Finally, and this is my favorite area of Xbox Music is the radio tab. This system allows you to pick a favorite artist or multiple artists and listen to a selection of tracks the computer picks for you. It's like a radio station of just continuous music. I've discovered so many new artists and songs with this system constantly which is amazing for those that like to keep it fresh constantly. 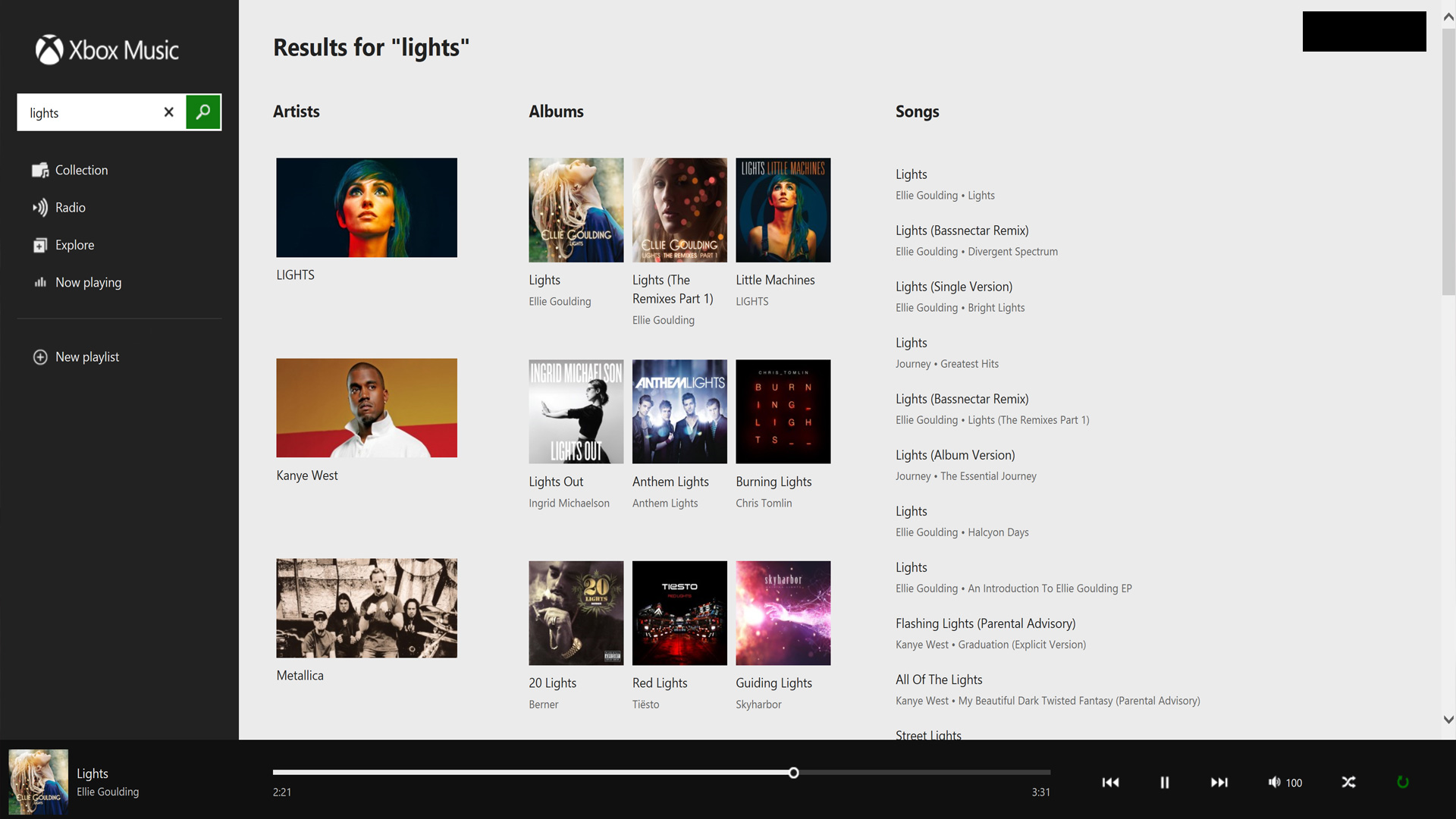 Mobile Music
Onto the next section of the review where I go over the Xbox Music app available for mobile devices. This includes Windows Phone, Android and IPhone. Personally I've used it on IPhone the most over the 4 and recently the 5s. Aside from that I've also played music on my Android tablet and Windows Phones at the Microsoft Store. They all work about the same though I did find the I4 version to have serious play issues with songs, but it's probably due to the older model of phones and its connection. On my latest device playing songs if flawless whether that's on WIFI or on the go. The interface is very simplistic and yet again lacks some more personal or colorful filling. You can pull up a screen area from the bottom for info like you would see from on-phone music so really nothing fancy. Though it does work perfectly like me playing some Freelance Whales songs from below and that's about as fancy or complicated as this version works. 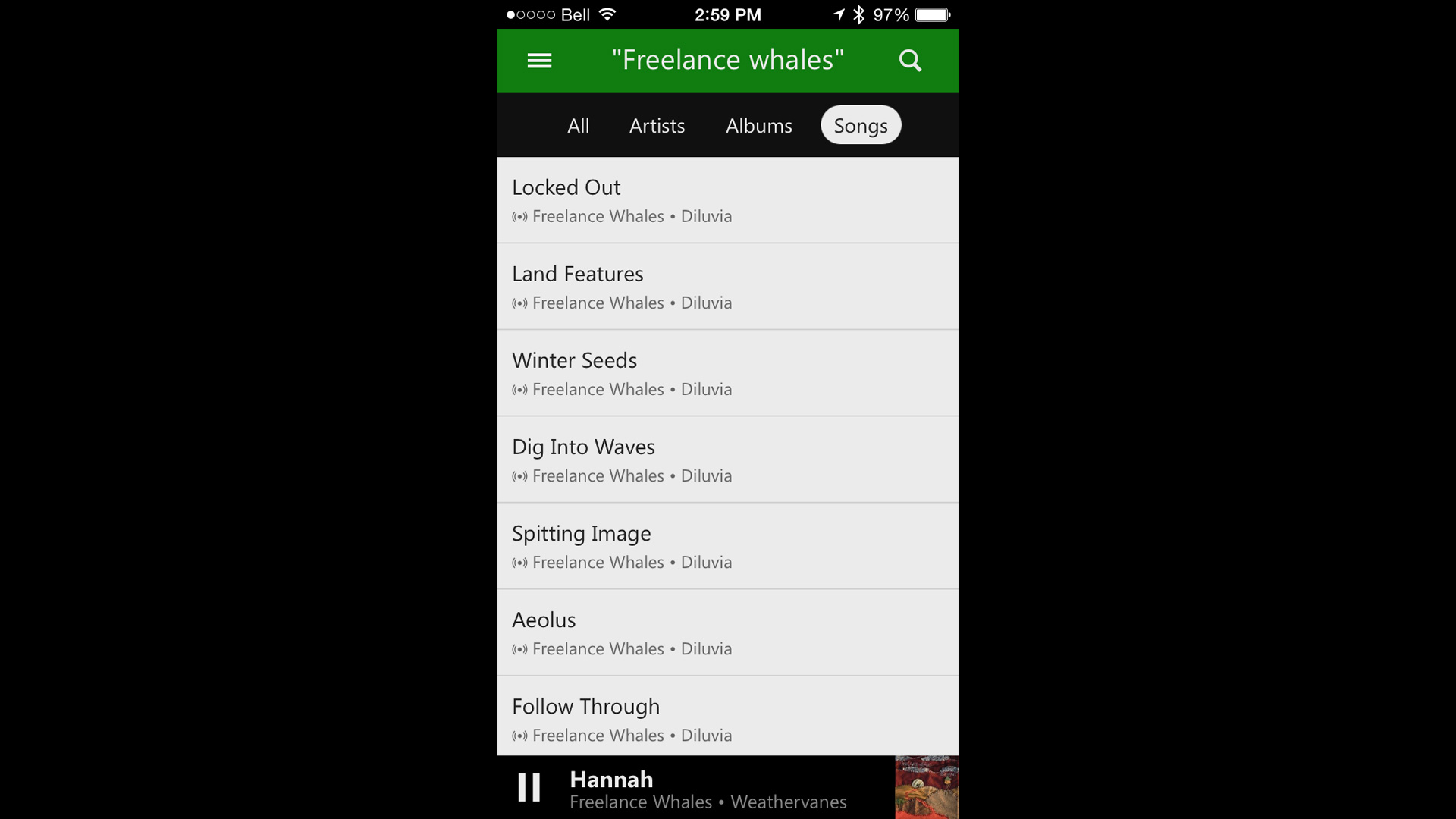 Music on Xbox One 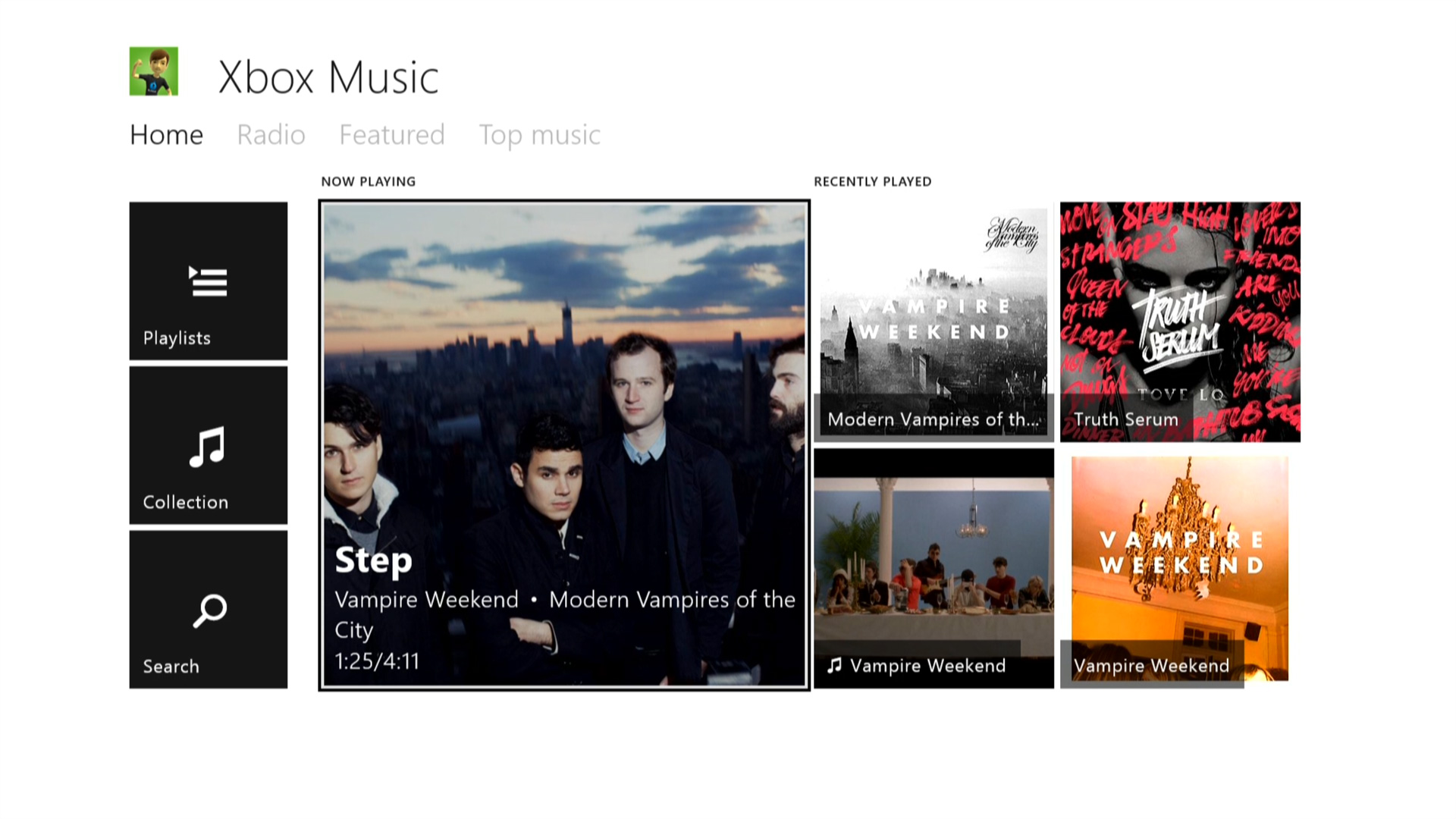 Finally we have the console aspect which gets gamers more comfortable with the surface. This device certainly makes the music look the best with actual videos for songs that have them and even images of the artist with their albums or band in place of it. This is a much better visual component which the other two services really lack. The image above shows the differing menus and all system from before also are carried onto this app. They have a more metro look to them, though this is the most busy page I could find. The image below shows off the song playing area with a still of the band instead of a video since this particular song didn't have it. The buttons are nice and visual with a great presentation from songs. There's also great hidden buttons to pick additionally music to add or cycle through extra things. The only disappointing aspect of this app is that it can't play in the background which is supposed to be patched in the future and has to be snapped at the time being. When snapped it becomes simplistic in style, but is still simple to operate. 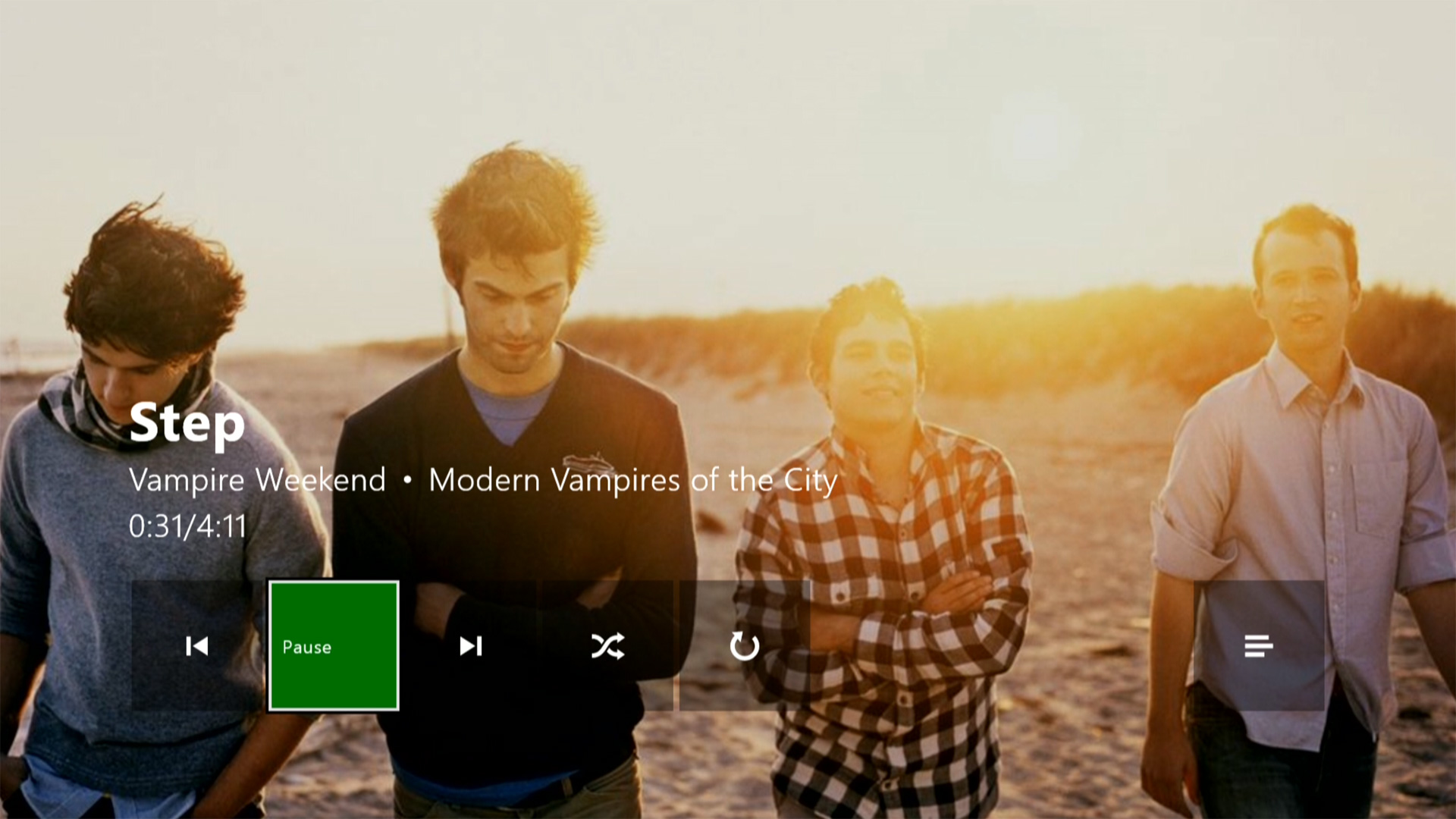 Xbox Music is a fantastic streaming service that I can't recommend more than enough if you have any devices that support it. As far as streaming goes it's definitely the best I've used at this point and for the price/integration it functions perfectly. I did have a bunch of issues outlined on each of the devices which really prevent this from being the ultimate experience for people, though this performs so well in so many areas. I use it every day to listen to my own tracks, to discover new music and to have whatever music you need available. Just somewhat need to get more artists on the bandwagon which don't support streaming and it'll definitely add more. No matter who you are there should be music available for you and there's always a month trial to give it a try.

Written by Jason Stettner Xbox Music—Review Rating: 9 out of 10
Comments by Disqus