At this point it's just the start for the next generation of consoles and we really have no party games. Fibbage hopes to capture this niche and does so quite well by creating an entertaining game for groups of people to enjoy. It's a simple and cheap game that can easily entertain a group of up to eight people for hours of enjoyment. Broken down into three rounds players will try to out lie or just trick players into guessing the opposite of the truth in order to gain the most points.

These points only continue to grow as the rounds progress up until the final Fibbage for all the marbles. What's really interesting about this whole concept is that it ditches the controller almost completely except for the first menu and gives players the easy option to visit Fibbage.com on any device they choose. I tested it out on everything from my Surface, to phone and browsers in order to see how well it played on the various devices. As a Web Developer by career it's quite a charming system of scaling and works perfectly. Signing into your private room key everyone picks a name and gets ready to play, you can even really have players not even the room play only missing out on some game aspects.

There are quite a few questions available per round and these are mostly fill in the blank for statements for people to lie about, if you have no good ideas the game can do it for you (less points though). I found most of the questions and their given answers to be quite hilarious. On that point the beauty of the game is that it can be youth friendly to even very adult depending on the atmosphere of your room. Fibbage can truly be one of the best party drinking games on consoles if played with the right group.

Everything is broken down for points as you progress through the various rounds with your lies. Try to convince everyone that your choice is the truth and rack up those points from others. You can also lose points and the whole game can change at any point. The host voice Cookie was quite awesome and I believe it was the guy from the Scene It? games last generation, could be wrong though I would love another one of those.

Answering and completing questions is just as simple as knowing how to use your phone or other devices with access to the internet. Sadly though there's no online play available and it's just a local thing. There's also a Like cup to be gained as people between rounds can like other questions they thought were funny or fit well for the topic.

For the price and potential hilarity for parties, Fibbage is a must have for console owners. It can range in age groups to a degree and is hilarious for everyone involved. The game can be quite tense at times as well with everyone trying to get the best score. Fibbage can provide great times of laughter and hilarity for a good group size which gets quite hectic with the more people. For future parties Fibbage will be a welcomed addition to the game rotation filling the niche it was aiming for quite well. 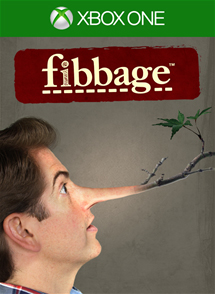