"In the World of Skyrim"

Enter the world of Skyrim like never before in Skyrim VR from Bethesda. The game begins with you coming to in the back of a prisoner cart en route to the local garrison to be executed for your crimes. Forced on to the chopping block, you earn a stay of execution as the camp comes under a sudden terrifying dragon attack. Making a hasty getaway, you now wander the countryside doing your best to survive. The main campaign revolves around the impending dragon attacks, although plenty of side-quests await those who wish to explore everything Skyrim has to offer. Every NPC in Skyrim has a story and may need help with tasks like impressing local merchants or finding missing loved ones.

The tavern has useful information about the world including tip-offs and jobs opportunities like collecting bounties or the less glamourous wood chopping jobs. Outside the walls, kill or be killed is the rule of the countryside. Game animals roam the plain attracting predators that attack on sight. Giants also wander the countryside along with mammoths which usually do not attack unless provoked. The mountainsides are rife with bandits who usually have decent loot for the industrious adventurer. Other sources of quality gear hide in the ruins haunted by the undead at night. Loot can then be sold off to the local merchants as the successful adventurer travels light.

Skyrim VR supports the PlayStation dualshock 4 controller and the PlayStation Move controllers. The dualshock 4 allows for a more familiar feel to navigating the world, inventory and character menus. Walking and combat have a traditional FPS feel and most players will be comfortable using this controller. The Move controllers have more of a learning curve. They use a teleport mechanic to move around and reduces the immersion slightly by blinking from spot to spot. Combat benefits the Move by using weapons in a swinging motion which is more fun in combat than pressing a button. The Move shines in ranged attacks as well using the natural motion of drawing and firing a bow as well as casting spells as whatever you point at burns with eldritch fire. I used the Move controllers most as they gave a more interactive feeling even with mundane tasks like lockpicking.

Skyrim VR uses a normal RPG leveling system with the option of boosting a skill, such as bow proficiency or skill with a two-handed weapon. The world itself looks amazing with the surrounding mountain range looking satisfyingly majestic. I especially liked the night sky, often just gazing at the gigantic moon as it moved across the heavens. The soundtrack sets a classic adventuring tone for the game without being distracting from the action. Character models and foliage look dated, especially on the human NPCs, although I do like the look of the Khajiit characters. My most memorable encounter was looking into the eyes of the first wolf that surprise attacked me. Perhaps it was the act of physically turning my head to meet its savage gaze that stuck with me. 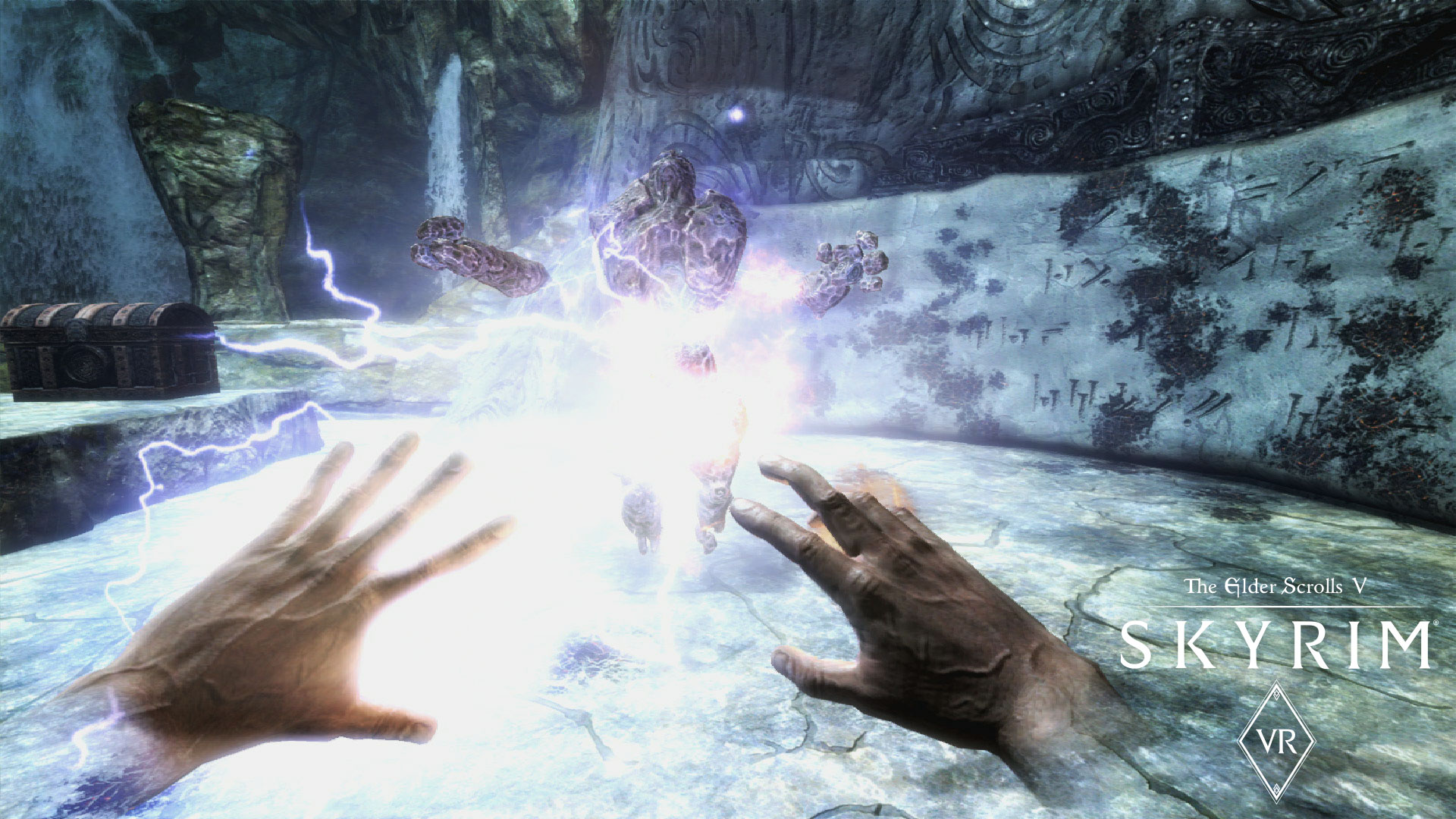 Using the Move controllers felt like putting me more in the action. Aiming was more difficult with the loss of the targeting reticle, but pointing the gun was more exciting. The only issue here was the rocket launcher which clipped through the display when aiming down the sights. Throwing grenades with the left Move was a literal blast as I learned that an overhand throw usually ended with the grenade at my feet, but an underhanded lob was dead on. This would become less of an issue after getting the grenade launcher. The Move’s interaction animations look better than the Dualshock’s also. Moving by teleport becomes intuitive by pointing the left Move at the target point eliminating the neck strain. The Move’s only downfall is a big one.

Both layouts feature a quick 180-degree turn, but without the ability to make the ninety-degree turn, firefights become difficult as I was reaching to shoot at odd angles because the demons were never either directly in front or behind me. The quick dash ability helped but still was not enough. The Dualshock 4 was my preferred controller. DOOM VR sticks with its classic health and armor survival method rather than health by loitering, encouraging a soldering style of gameplay. Game difficulty ranges from “I’m too young to die” to “Ultra Nightmare” with a total of five levels of difficulty.

Bethesda made a bold move making an open-world virtual reality game set in one of their flagship properties. Unlike other virtual reality titles, Skyrim VR is not set on rails or restricted to a set of rooms allowing the player to explore as they see fit. Skyrim VR has set the stage for other open-world properties to follow. Whether following the story or keeping busy with side quests, Skyrim VR for PlayStation VR engages the player like no other Skyrim before it.