"See You in Hell, My Friend"

Bethesda brings the original FPS to VR in DOOM VR for PlayStation VR. In DOOM VR you take on the role of an average researcher that gets murdered by a Pinky before the game even starts. You come to in cybernetics lab where a Combat Chassis waits for you to possess it. After a quick tutorial on moving and fighting in the virtual environment you are ready to start sending demons back to where they came from. Finding that someone in the facility has opened a portal to Hell, it falls upon you to figure out how to close it. As you teleport to different areas of the facility, you piece together how to close the portal while fighting off demons in arena areas.

You acquire new weapons quickly and most can be modded with a secondary fire. The cast also features instantly recognizable demons from the series, from the lowly Possessed and Imps, to the Hell Knight, Revenant and Cacodemon. DOOM VR also does exceptional fan-service by including the Marine Guy action figure collectibles and clever nods to its own history. My favorite Easter Egg is a match-three minigame featuring the original demons found on one of the facility computers. The levels combine the sterility of a futuristic research facility with disturbing imagery of a demonic cult complete with bloody altars and corpses displayed in vulgar visceral vignettes.

DOOM VR supports the PlayStation 4 Dualshock controller, PlayStation Move controllers and the PlayStation Move Sharpshooter. The Sharpshooter was not used in this review. The VR environment is one of the best I have seen from PlayStation VR titles. Moving around uses a teleportation mechanic that is smooth considering how frantic the action gets in the shooting arenas. The teleportation move is also used as a melee attack on dazed demons. This renders the usual melee useless, and sadly the chainsaw is not present in this game as a weapon. Using the Dualshock 4, aiming is easy because of the targeting reticle in the HUD. It also uses the right thumbstick as a ninety-degree quick turn which becomes essential in the move-or-die firefights. The downside of the Dualshock 4 is that teleporting long distances had me craning my neck back farther to create the longer travel arc. 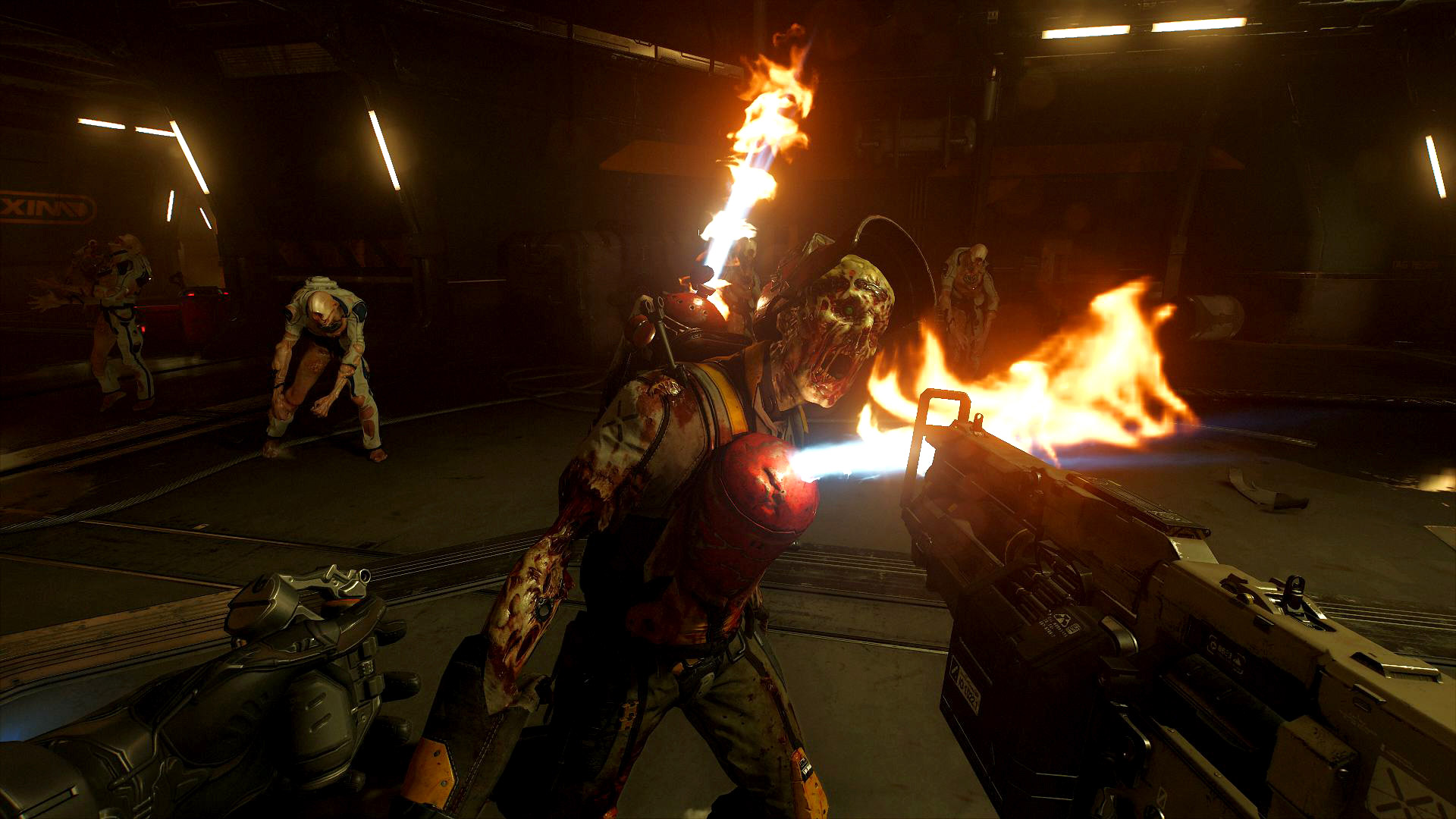 Using the Move controllers felt like putting me more in the action. Aiming was more difficult with the loss of the targeting reticle, but pointing the gun was more exciting. The only issue here was the rocket launcher which clipped through the display when aiming down the sights. Throwing grenades with the left Move was a literal blast as I learned that an overhand throw usually ended with the grenade at my feet, but an underhanded lob was dead on. This would become less of an issue after getting the grenade launcher. The Move’s interaction animations look better than the Dualshock’s also. Moving by teleport becomes intuitive by pointing the left Move at the target point eliminating the neck strain. The Move’s only downfall is a big one.

Both layouts feature a quick 180-degree turn, but without the ability to make the ninety-degree turn, firefights become difficult as I was reaching to shoot at odd angles because the demons were never either directly in front or behind me. The quick dash ability helped but still was not enough. The Dualshock 4 was my preferred controller. DOOM VR sticks with its classic health and armor survival method rather than health by loitering, encouraging a soldering style of gameplay. Game difficulty ranges from “I’m too young to die” to “Ultra Nightmare” with a total of five levels of difficulty.

DOOM VR for PlayStation VR is a solid FPS experience. It has the classic elements of a DOOM game, immersing the player in the DOOM world. It features disturbing imagery and classic demons. The arena areas are tooth-and-nail fights for your life at any difficulty. Although the story is simple, the hell-bent action and scenery make DOOM VR a satisfying experience.