"Twist of Time and Fate"

Back in the good old 80's we are presented with an alternate timeline where a physicist has managed to create a time manipulation algorithm. This of course causes a wild amount of chaos from which the Super Time Force is created bringing a group of extraordinary individuals which fight across time and space for no reason but their own. What was really hilarious and interesting about the game was that it was actually over in about fifteen minutes, what? Well you fix time and defeat your enemy to vacation over in Canada! From there you go on various joyrides at your commanders discretion between multiple zones as you try to fix time for what you feel is the better. This leads you into every sort of crazy place from Atlantis to Medieval or even the near future apocalyptic time, that we'll umm... fix later. Coupled with a pixel world the environments and levels are just beautiful with wide scope and filled with small little treasures and references. These vary from little minor characters that get squished off the start, background happenings and extra characters to save which will then join your cause. Collecting these extras will make your gang pretty cool and add variety to the team. There are also extra particles sitting around in the air that can be collected for slow motion, extra time lives and bonus time. All of these items are important and will definitely help as you battle it out. It will also help a lot when attempting to beat some of the tougher levels. Now this is where I get really pissed off is some of the tougher parts where the game gets quite stressful by piling enemies on the map and clustering difficult sections. This is even worse as you feel this constant pressure from the time that is counting down constantly, you have to keep it up while also dealing with everything else going on. This is the worst on the jetpack levels as they are just dreadful actually. The last couple levels are also really at a maximum for anger and stress as I attempted to escape this damn fire so many times, it really does eventually get to you. Other than those really testing areas I did actually leave with a good feeling after though it would have been far better if the difficulty wasn't so spiked. Now the story was well set and did a good job of presenting something unique and funny. Super Time Force Go! They seriously need some sort of theme song, would have been awesome. 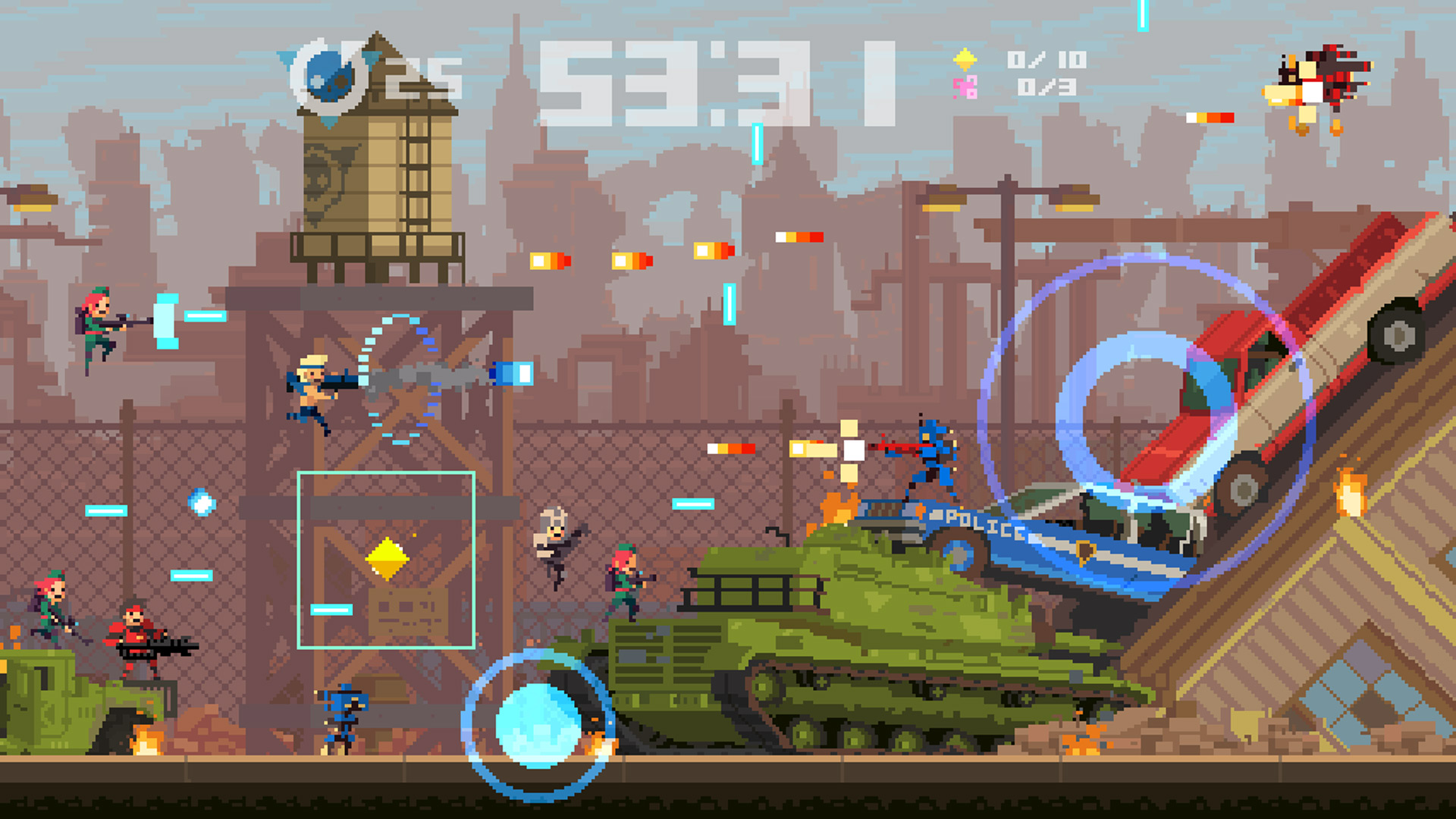 There's something fascinating about seeing the end replay after every campaign level as you see every change and swap you made within time come together to a direct line. It is epic and recordable quite easily which is a welcomed use of the DVR feature. It's also quite something to see all these bodies and characters you have used come together in massive waves of bullet fire from which you will definitely see. Now I'll get onto the whole time system and character weaponry setup. Time is confusing at the start, though once you get to learn it you will become a master at it. You will use time to basically give you more time as split off in various paths while keeping the focus point your main goal. If you need to save a character or assist a previous life split off while keeping your eye on the prize. This is achieved by rewinding and fast forwarding time to just the right soft spot to continue. It really is difficult to explain, but really cool when you get use to it. For characters they each have a set of abilities and weapons from which you must use to their advantage. This is everything from chain guns to dolphin sonar or even gater mouths. It's really weird, that's some of the characters which are really funny to use. The actual campaigns are split into various levels which have an overall arch and worlds are beautiful in their own pixel way. 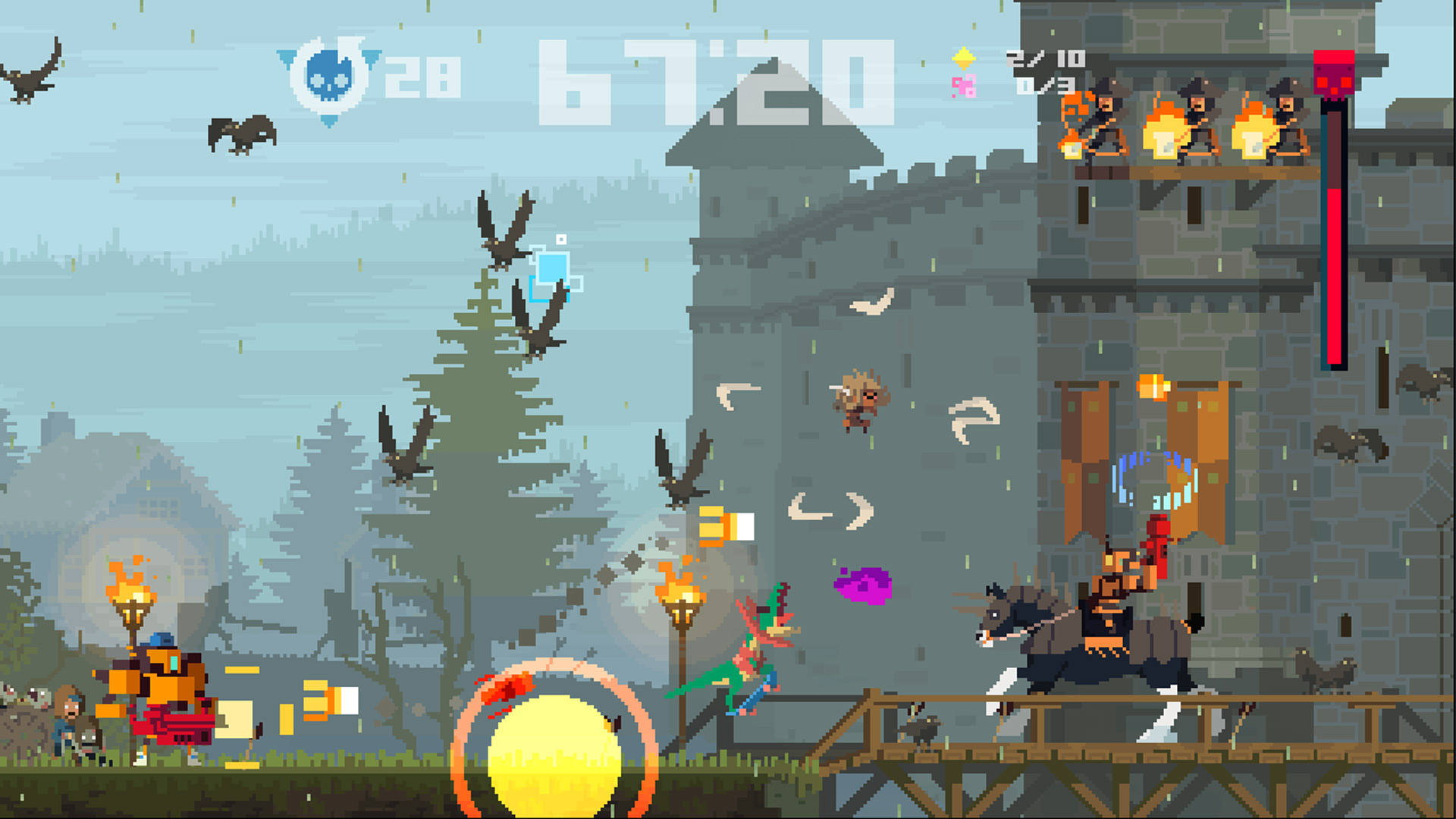 Super Time Force is fun, crazy and a great pixel game. It can be really stressful when you fight the clock and levels can be rough. The use of time is awesome and makes every moment and play unique. There's just something really unique and awesome seeing waves of bullets fly with characters running about while facing bosses or solving puzzles. The features on the Xbox One are at well use and this is a great game for your collection. There are others of gameplay available and a hardcore mode after if you are looking for another challenge. Join the Super Time Force today! 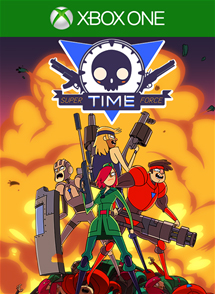