The Jackbox Party Packs have been a staple in many fun group events and activities with the family over the last few years. I love the side releases and find these main packs to usually just be a joy. This fourth pack is the best release in the series yet providing an excellent selection of fun games for a group to play. If you're unaware of the series, it's a party game for two or more players with usually three being the minimum in most games. Players join from anything with an internet browser such as a phone or tablet and easily play. Games often involved typing funny sayings, filling in the blanks or even getting creative with drawing.

The most glorious of games, Fibbage is an absolute treat with each iteration. It's packed with crazy questions as you fill in a blank to try and trick others. If they guess your answer you get points and even more are given if in turn to select the correct response for the empty space. It's a blast, very funny and if you get the right group of players a most charming of times. Aside from the core selection of questions, there's also a "Fibbage Enough About you Option" which has players generate responses based on questions about themselves. 2-8 players, audience can join. 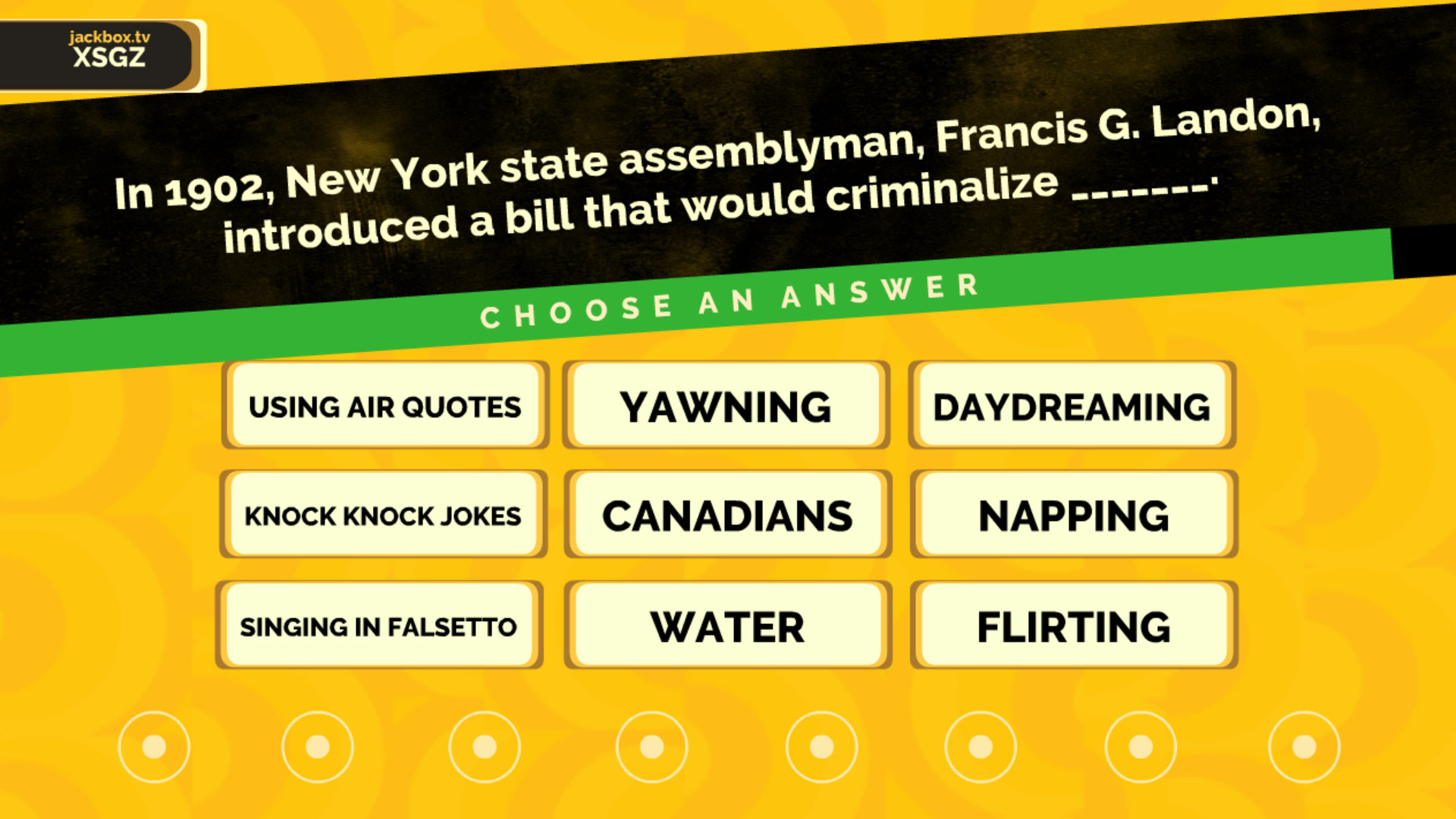 This survival of the funniest mode has players working through a number of similar, yet slightly tweaked little games. It starts with a twist of words as you take phrases others produce and then give it meaning. It may sound odd, but it works and it can produce some hilarious things. Say there's an image, you write a phrase to match it and then someone else takes that on. They only get part of it out of context and create something funny, it's great. The games in various stages take on different forms of the internet from forums to social media postings which really captures the digital world. 3-8 players, audience can join.

This one is a bit awkward, I'm not sure where it's appropriate but if you get people to go with it I guess it could be fun. Basically it's a dating game where players have an ability which they try to hide and then send a couple messages each round to woo others. You're trying to get a date with another player and see if you like each other to some degree in the game, definitely awkward. 3-7 players, audience can join.

A battle of phrases as you place bets on what will win the stupidest of arguments. This is best for larger groups or streamed matches as lower player counts sway votes too easily. It can be hilarious to see some odd phrases pan out in this all out battle up the charts, though you will need slightly higher player counts to make it interesting. 3-16 players, audience can join.

The latest drawing game is awesome, instead of building or bidding players will compete with layering. As part of a way of improving the art around a city, you need to draw as a team to some degree. Players try to make an object and then each round compete for what addition will be made to said drawing. It's funny and can produce some really crazy looking drawings. They really did an excellent job with this one as I love these drawing titles and this is up there with the holy Drawful. 3-8 players, audience can join. 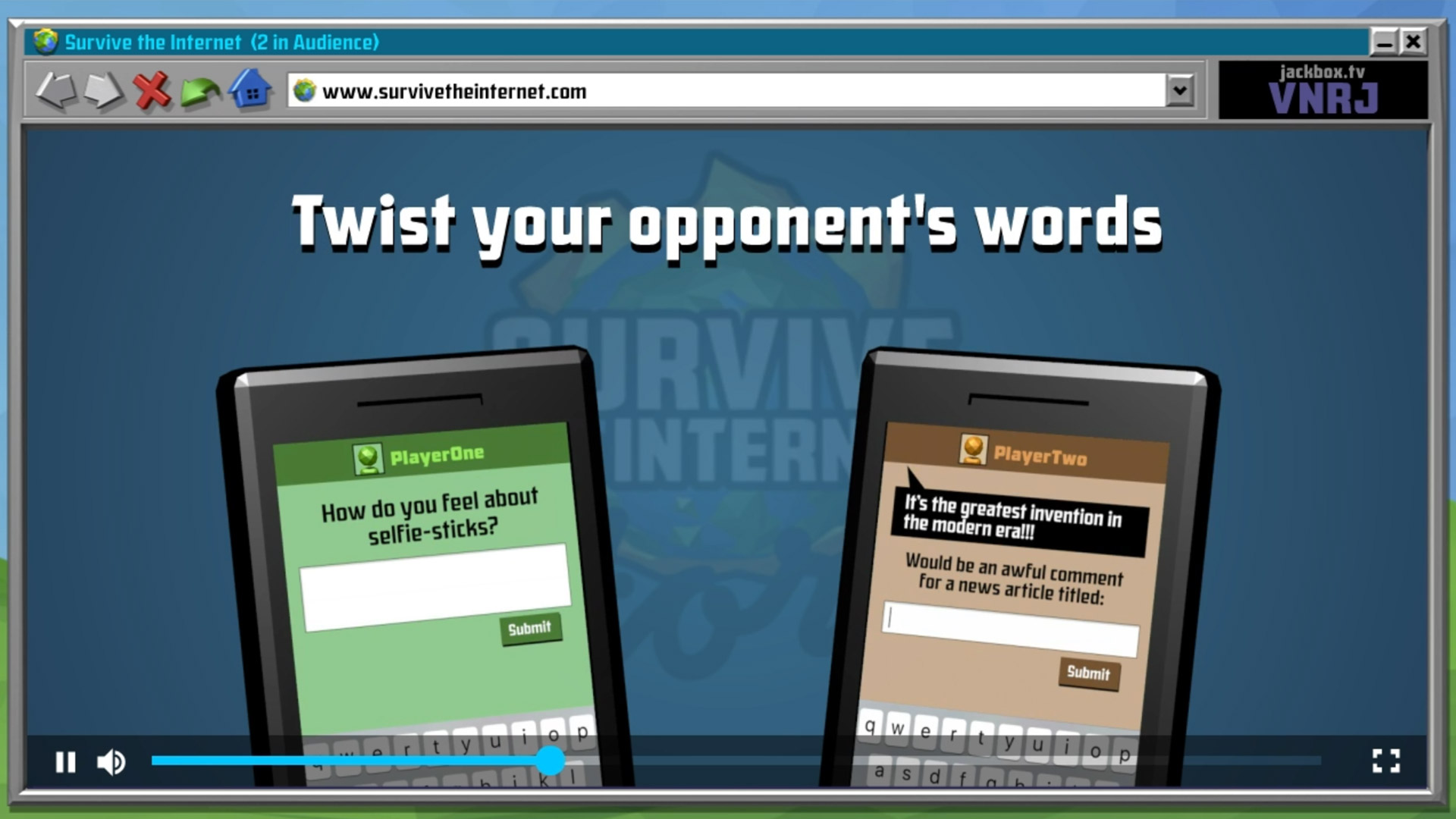 Jackbox Party Pack 4 is fantastic, it's a blast with a group of friends and they've really put together a solid selection this time around. I'll now take some slight time to go over settings since those are important. You can censor things if you want a family friendly experience, there's audience options and Twitch integration built right in if you'd like to share the experience online. They also finally fixed the controller turning off fades the screen to black issue, thank you! The presentation in all games is stellar, definitely feels like a quality boost in art and imagery which is splendid across every game.

The games are funny and for the most part this pack combines a solid selection of games to play. Fibbage 3 obviously shines as usual and some of the newcomers will also provide a laugh. I did however find Monster Seeking Monsters awkward to some degree, but suppose it depends on the social group. If you like the other packs then this is a great next addition, if you've never played any of the past Jackbox Games you're missing out and this is a good entry to start.