"Get Along Lil’ Dinos"

Dino Frontier VR for PlayStation4 VR is a simulation game set in the Wild West that also happens to be home to dinosaurs. The Mayor, represented by giant rancher gloves, oversees building a town for the settlers while making sure they have the necessities to survive the wild new frontier. Starting with one settler, The Mayor is tasked with providing a food processing factory and a lumberyard. Soon the town begins to attract new settlers as the settlement begins to thrive. Buildings such as the saloon, housing, food factory and hospital provide the settlers with the necessities of life. While other buildings provide perks like the hunting cabin for better weapons and a gym for increasing their stats.

Specialized buildings like caravan stops let the Mayor travel to new areas like an abandoned farmhouse and mine site. The most important specialized building is the Dinosaur Pen. The Pen allows captured wild dinosaurs to be trained to function in running the settlement. The Mayor originally must collect all raw materials hewn by the settlers. Now these tasks are done by specially trained dinos. The dinosaurs are also handy in repelling the random bandit attacks on the settlement. With just a few trained dinosaurs, the settlement becomes fully self-sufficient leaving the Mayor free for other tasks.

Dino Frontier VR only supports the PlayStation Move controllers. The landscape features beautiful rock formations with a “Big Sky” skybox. The characters and buildings have a charming cartoonish look to them and the background music has traditional gaucho flair. While the role of the Mayor may seem a bit tedious at first, the addition of the dinos make the settlement run smoothly in no time. Areas like the farmhouse are “Mayor Only,” tasking the player do everything in the area with the help of a few dinos. The mine has the Mayor actively managing the settlers to work the mine and defend it from the raiding Bandit King.

Combining all these keeps the game fresh and engaging throughout. The Mayor’s main duty is resource management which is kept track by a watch in the left wrist. A simple turn of the wrist displays all resources along with the location of all settlers and trained dinos in the world. The world can be viewed by grabbing and turning, stretching or compressing controls zoom and a special control on the left menu adjusts height. Along with being able to change building placement gives total control of the experience to the Mayor. 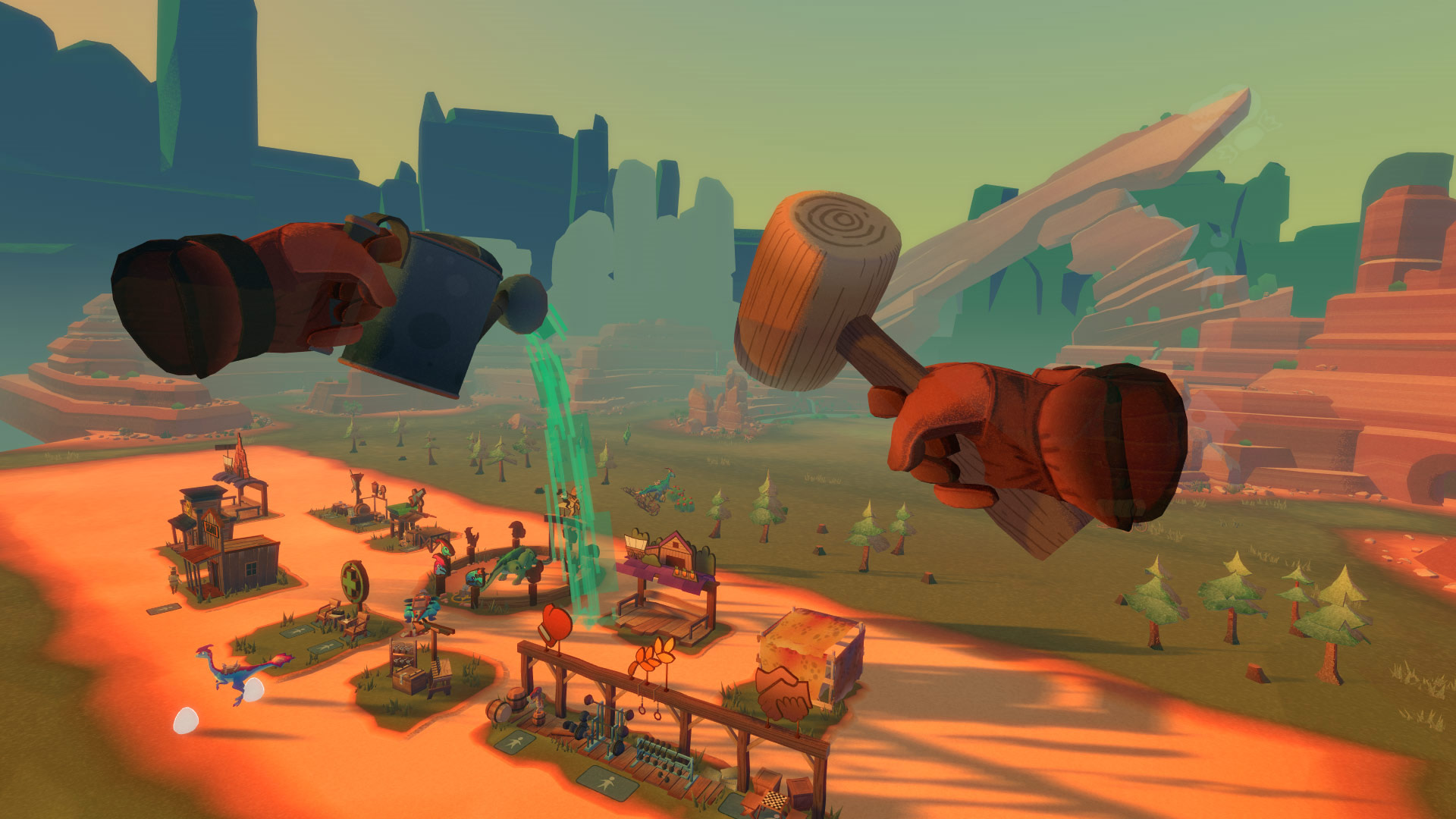 Dino Frontier VR for PlayStation4 VR is a blast. It is accessible for all ages. Once the main settlement is established, the other areas keep the game interesting by engaging the Mayor and not degrading into an ant farm. The vistas and characters create an enjoyable experience. The narrator has a pleasant tone and will even sing a song or impart frontier wisdom during load screens. Dino Frontier marries two unlikely genres into a guilty pleasure that is worth adding to your PlayStation4 VR library.