"Send Me an Angel"

Archangel VR for the Playstation4 VR is a shooter-on-rails that has the player piloting a six-story mech in a last-ditch attempt for freedom. Set in a dystopian future where most of the United States is a wasteland, Humnx (pronounced “hu-man-icks”) has a stranglehold on the U.S., while the United States Freedom Force attempts to end the Humnx threat with the their new mech super weapon. Players choose to play as either Gabe or Gabrielle Walker to lead the team. After the initial weapon test-tutorial, the base is attacked leaving the team to flee to survive. They find themselves the sole survivors of the attack and must fight their way cross country to a possible mythical city to deliver the mech to Paladin, the leader of the Freedom Force. The team is comprised of three other units that support the mech. Liberty releases nano-bot canisters to repair the mech, Rambler has a heavy gun that relies on targeting from the mech and Bulldog releases heavy mines to take out large targets. As they fight across the country dealing blows to Humnx, the mech becomes known to the people as Archangel and a symbol of hope.

Archangel VR supports both the Dualshock4 controller and the Move controllers. Survival in the game depends on using both the weapons and the shields built into both arms. The shields are triggered from the controller forming an impenetrable energy circle from that arm that can be moved to cover the mech from attack. Using these shields effectively are the best way of staying alive. Weapons can be fired while using the shields.

With the Dualshock4 controller, the targeting reticle is controlled by pointing the controller at the target. The shields are also positioned by moving the controller to cover attacks forcing both arms to point at the same spot handcuffing the player with the option to attack or defend at any given moment. I also found that alternating left and right arm motions to be unintuitive with the controller. This was a detriment trying to grab nano-bot containers with alternating hands, giving half the health canisters dropped.

Choosing between Gabe and Gabrielle is a personal choice and does not affect the story. Between missions, upgrades can be purchased for the mech’s defenses and weapon systems. The player can also talk to the mech’s AI or talk to any member of the team. I had wondered what the purpose of the team was in the beginning, as Rambler and Bulldog did not seem to serve a purpose early on. Encountering the first large enemy, Bulldog sent out a mine that had to be shot to be detonated. Later, Rambler proved his worth by having a weapon that would fire on whatever the player looks at. Liberty should be the most useful since she drops health packs but the team only contributes when the story says so, giving the player no control over the support team. Another strike to Liberty is that getting full health is as easy as dying, making it a battle of attrition to the next checkpoint.

The wasteland terrain looks good, and the mech has the feel and sound of a six-story war machine. The story is engaging as the player travels across country disrupting the hold of Humnx while becoming a symbol to the people. The character designs relate their personalities although the voiceover sync is not there, and many times a character will finish a sentence, but their mouths will be moving for a sometimes uncomfortably long time. 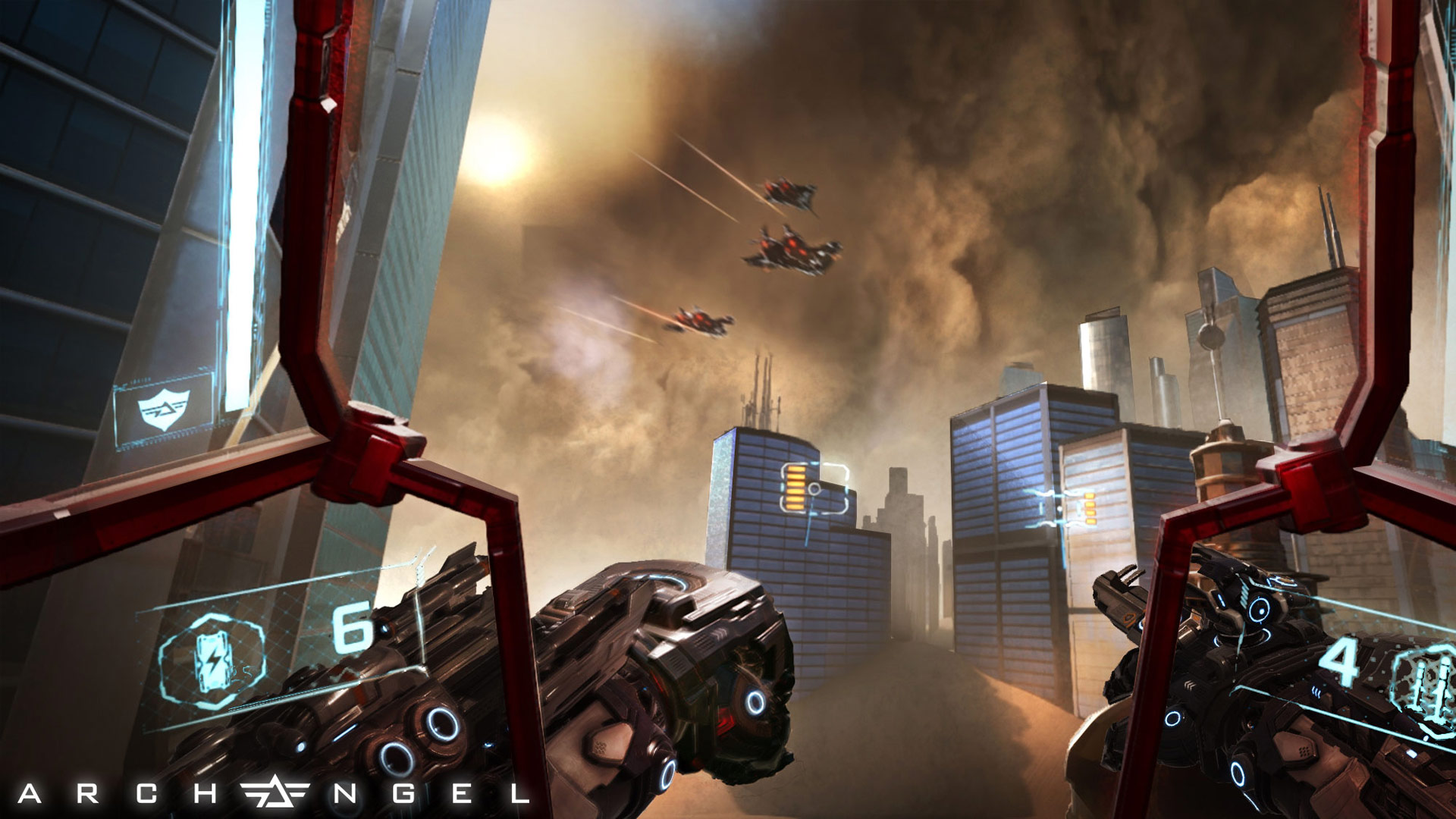 Archangel VR for the Playstation4 VR delivers a fun mech based shooter. The different weapon systems are available on demand without preset loadouts and the Move controllers give the freedom to unleash them to the greatest effect. It seems that the support team could have been integrated but perhaps they were there to keep the pilot from feeling trapped alone in the mech. Although being able to use the team on orders would have more helpful than a patronizing, “You may want to start using those shields.” advisement. Archangel VR, despite some issues, gives a decent mech shooter experience.