Crossout is a free to play driving combat game which is essentially a mix between Mad Max and World of Tanks. In the regular garage area you’re able to build and customize whatever sort of vehicle you’d like. You can start from scratch, enhance an existing vehicle or tweak any vehicle part by part while keeping within the parameters. You can aim for lightweight to be quicker out on the battlefield or more protected, but slower. Its wild seeing a wide range of cars whether that’s with color or wacky design. You then take your vehicle to battle with a series of options where you’re working to gain better parts.

The main mode is based around either destroying your opponents or capturing the enemy/neutral position and these are fast paced rounds. It’s fun to play, tense and exciting as you blast the enemy vehicles to bits by being able to destroy every little portion of it. There are of course additional modes such as Raids which are PVE where you work together to do missions or more advanced modes called brawls which feature Free for All, Storm Warning and Race at launch. Free for All is just open deathmatch without teams, Storm Warning has a storm that sweeps across the map and Race is circuit based combat. It may not seem like a ton of things to do, but the core mode works well by itself and you can just keep replaying it. 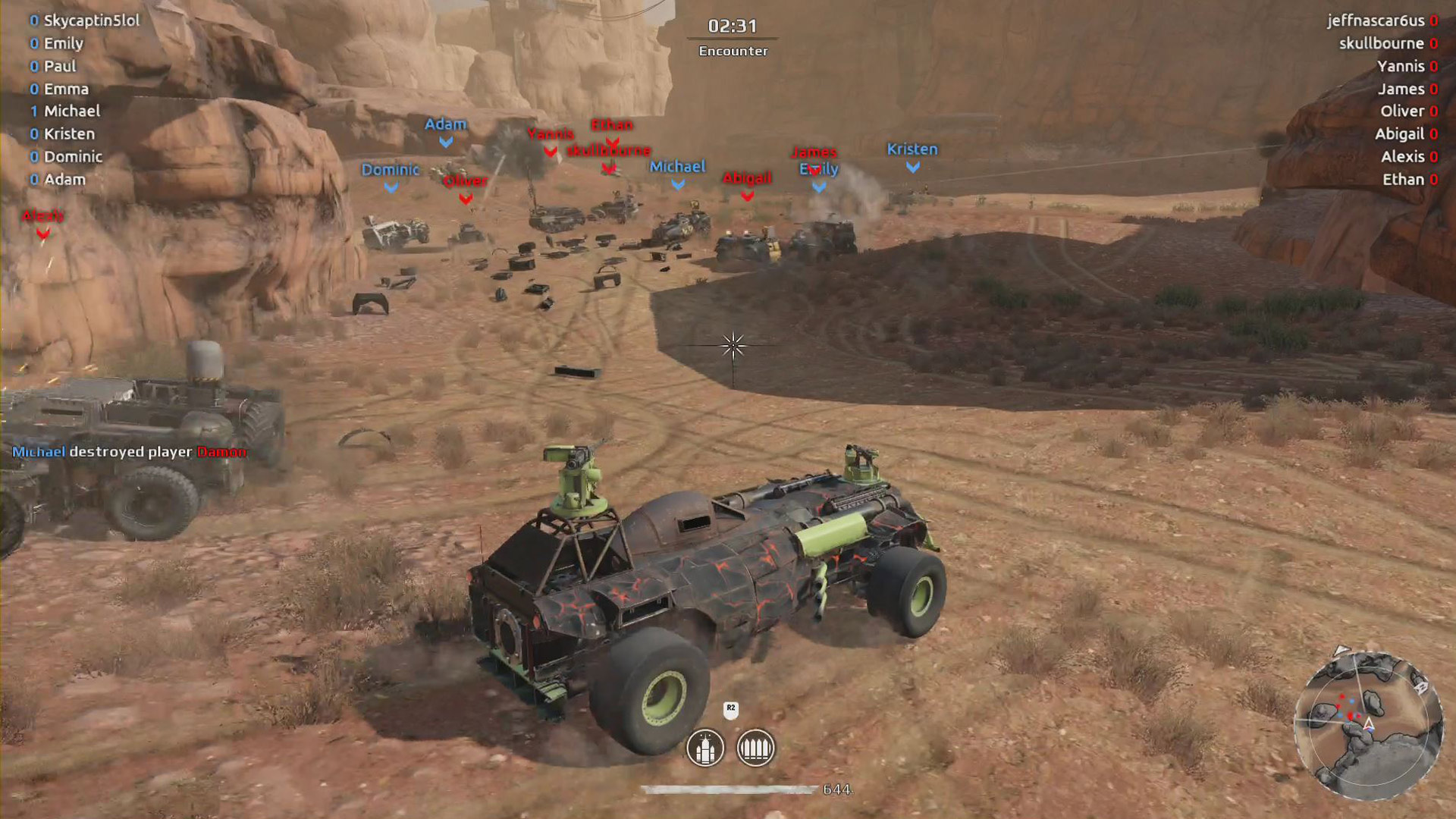 I was rather impressed with the visuals of Crossout, finding the game to have a realistic yet desolate look. The world is basically apocalyptic with some re-claimed natural areas and it works well. You get a variety of environments across the selection of maps from burning deserts to grassy destroyed cityscapes. The rendering distance is also well done with long visuals that only on the odd occasion had some smaller shrubs load in that I could see. It works well for the quantity of carnage going on with every tiny piece of car being scrapped away. It's a rather interesting mechanic as you can see shrapnel fly off and even aim for the turrets as a strong strategy for disabling your opponent.

At that point they become harmless with their only option being able to take your capture point. The destruction looked great, the combat felt balanced and you can see some crazy vehicles out there. You can really build whatever you'd like within the very easy to use garage. This is equipped with all your parts to play around with, a free market to sell or buy things on and missions to collect better items. The matchmaking is very impressive in the game taking only a few seconds though you may run into matches with some bots. This was mainly the case during pre-launch, but since it's a free to play I fully expect player servers come launch since I have already played with decent real player numbers during the pre-launch. That aside, the bots do put up a decent threat and can keep you on your toes. 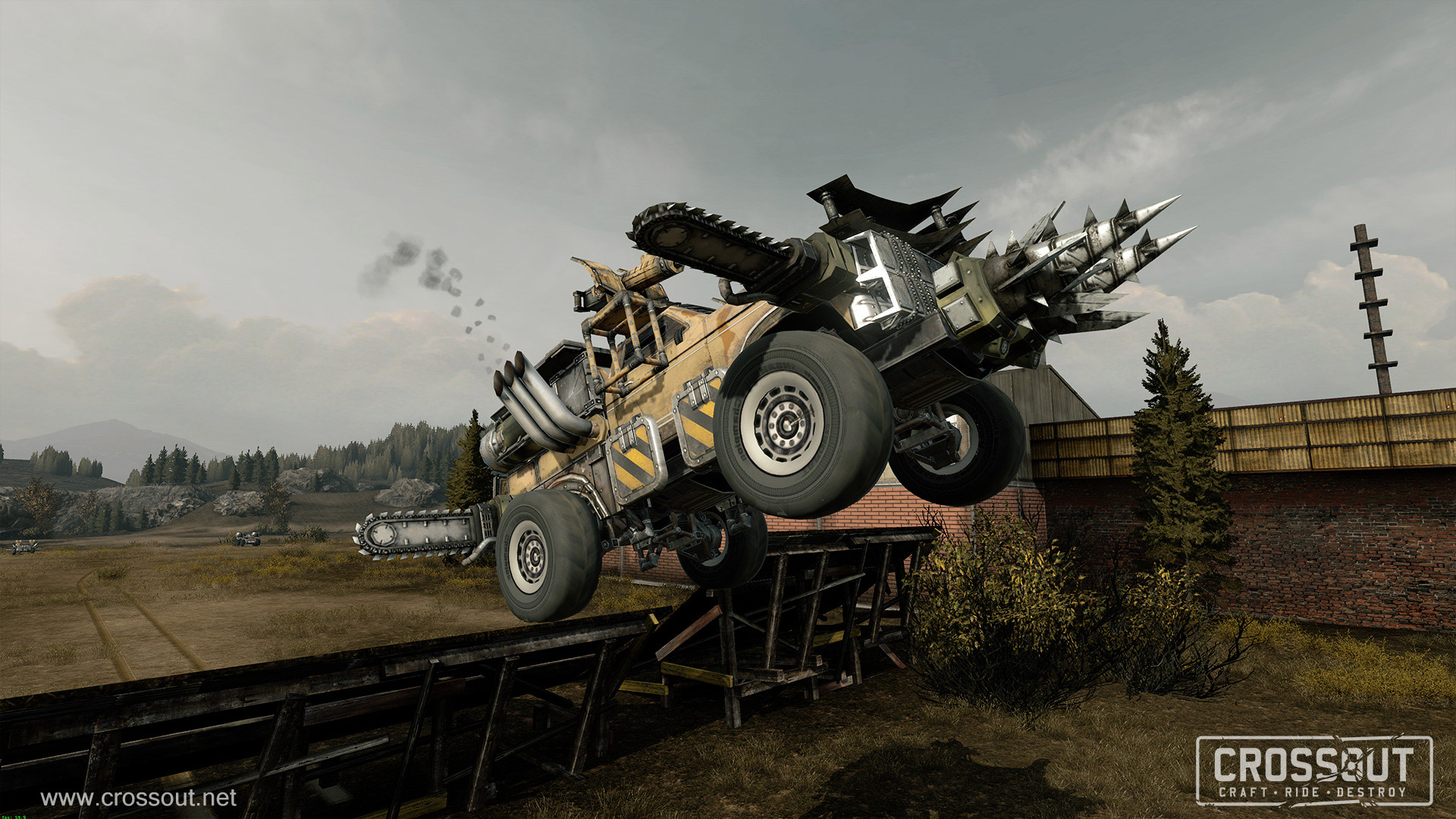 Crossout was fun to play, very competitive and offered almost unlimited customization for your vehicle. You can build whatever sort of thing you'd like while crafting with a fairly open requirement grid. The multiplayer modes were fun, felt balanced and were filled with intense carnage. The garage was awesome with how open it was for building and the player run market works efficiently for collecting parts. I also really was impressed with the visuals of Crossout finding them to look realistic and handle any sort of destruction very well. It's absolutely crazy to see little pieces of your car being blown away and then trying to drive missing big chunks or even wheels of your ride. This was certainly a well developed free to play game that I'm sure many will enjoy playing.