Bloons is a fairly well known game online as it's certainly something I've watched others play for well over a decade. In Bloons TD5 we get an ultimate sort of version bringing in a ton of maps, towers and goals to accomplish while popping balloons. Bloons is a tower defense game where the goal is to create monkey based towers to defend a selected path from the invasion of balloons. This is done over a massive selection of completely unique maps against a vast grouping of balloons from which you have many towers to strategically select. The game really doesn't have lots to it in terms of what you're doing, but if you like tower defense then there is most certainly an unlimited selection of content. You can choose to play levels in solo or cooperative with a friend, but you can also just matchmake for another player which is a nice option. Each level carries its own difficulty rating along with various medal scores that can be accomplished over a set amount of waves. This provides many hours of gameplay as you'll aim for the best scores and in turn you will unlock additional challenges to take part in.

It's simple in design as you take an overhead view of the situation and place towers over the map in locations that best fit the strategy you're using. These towers fire by themselves so it's mostly a management of making sure everything goes smoothly. There's a large list of towers available and these are purchased with coins you earn while playing in each separate match. Some are straight up turrets, some provide special advantages over balloons whereas others help support the battle. A couple examples would be a banana tree that spits out currency or a Ninja Monkey that sees balloons which others miss. It's certainly creative and there's a monkey tower to cover any sort of scenario that might happen. You'll need to find the right balance between them all in order to get a successful strategy going and hit those higher rounds. 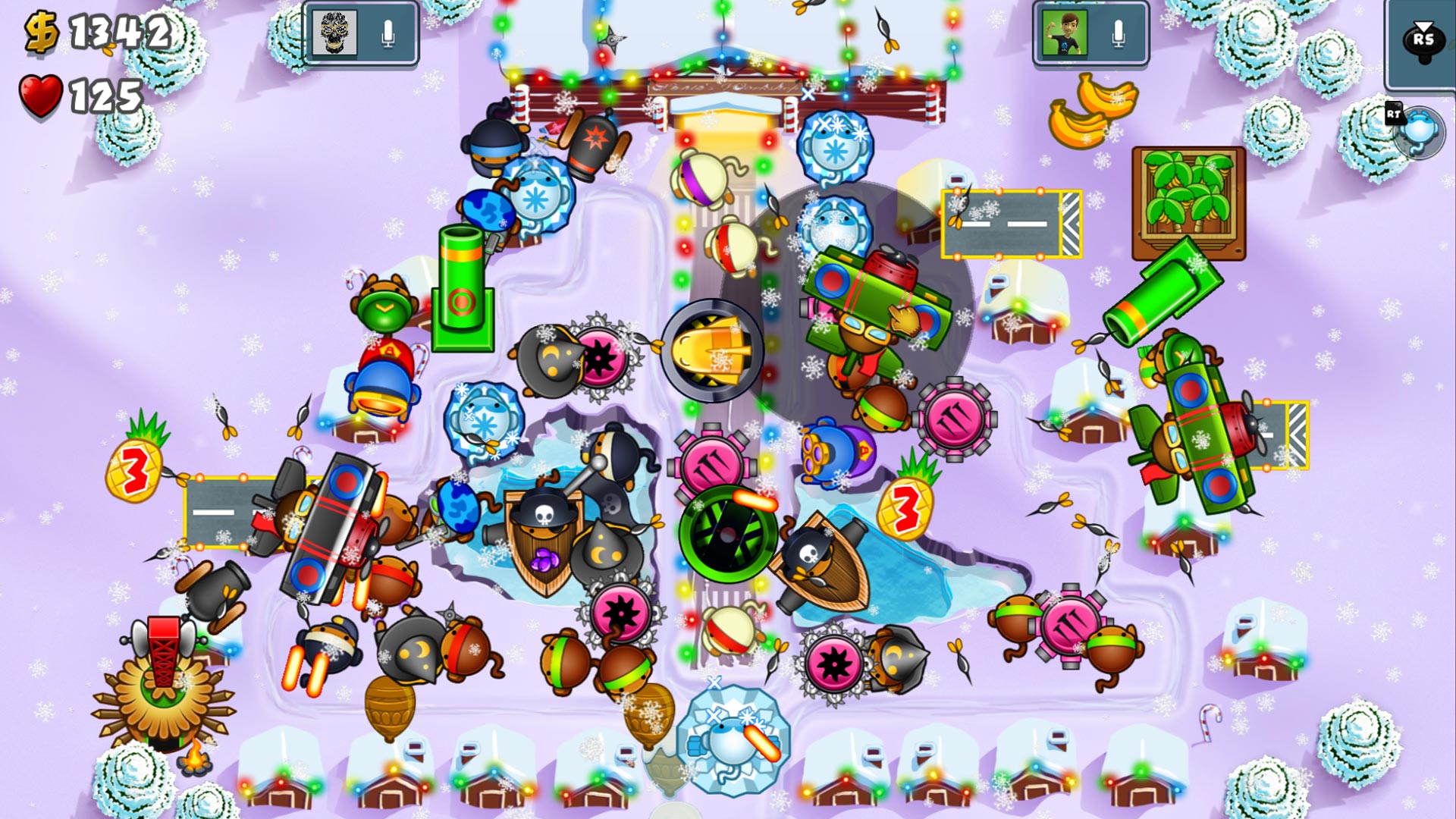 I personally love the Hero Monkey as it can be upgraded to some crazy feats. This is the next area as the turrets can all be upgraded with multiple trait trees to determine what abilities or benefits it can provide. You also unlock better upgrades, new turrets and more items by gaining experience while just playing. The maps of the game were rather simple though great in design offering such a wide range of locations and route paths. Visually it looked solid providing a cartoon style artwork while balancing hundreds of objects firing away at once with no issues in performance. In cooperative play things are only slightly different as you each control a half of the map and can trade money between yourselves though it would have been better to choose exact amounts to trade.

Bloons TD5 is a fantastic tower defense game offering a vast selection of towers, locations and balloons to pop by yourself or with a friend. The online element was a great addition which was certainly appreciated and while the core game is simple, Bloons offers a very content dense experience. It was a blast to play popping all those crazy balloons and their occasional boss balloon leaders on the way to victory.