Final Fantasy XV is the latest entry in this long running series and while I've never played any in the past I was interested in giving this one a go since it's the first core entry in awhile. The story follows prince Noctis on his quest to go get married and that's where the story begins. Noctis is joined by his close friends and royal followers; Ignis (the tactician), Prompto (the photographer) and Gladiolus (the bodyguard and muscle). Together you create a tight group that's sworn to the crown and working as a team you tackle all scenarios that you come across. This starts immediately with your car breaking down and everyone having to push it along the road, it's not particularly exciting though it does provide a solid starting point for what this game's about. There's some overall epic quest in the story, but it's more focused on these four and their journey together. Each is beaming with personality and traits that make them important to the various quests you come across.

Moving through vast and open landscapes you complete quests of choice or story if you'd like. It's a massive open world filled with a great selection of things to do if you choose, but also a fairly linear quest line if that's all you're interested in. The story is fairly lengthy taking you across the world in search of certain relics, but also features a softer side with some fun quests that flesh out the characters. These more personal quests were where the story shined as the regular core quest had some inconsistencies. Despite the gravity of the situation that unfolded it was odd how the world was just moving on fine and that the characters didn't seem that affected in regular activities. I'll also mentioned that while the first portion of the game does feature open choice, the story gets completely linear later on and it's actually quite a sorrowing tale. 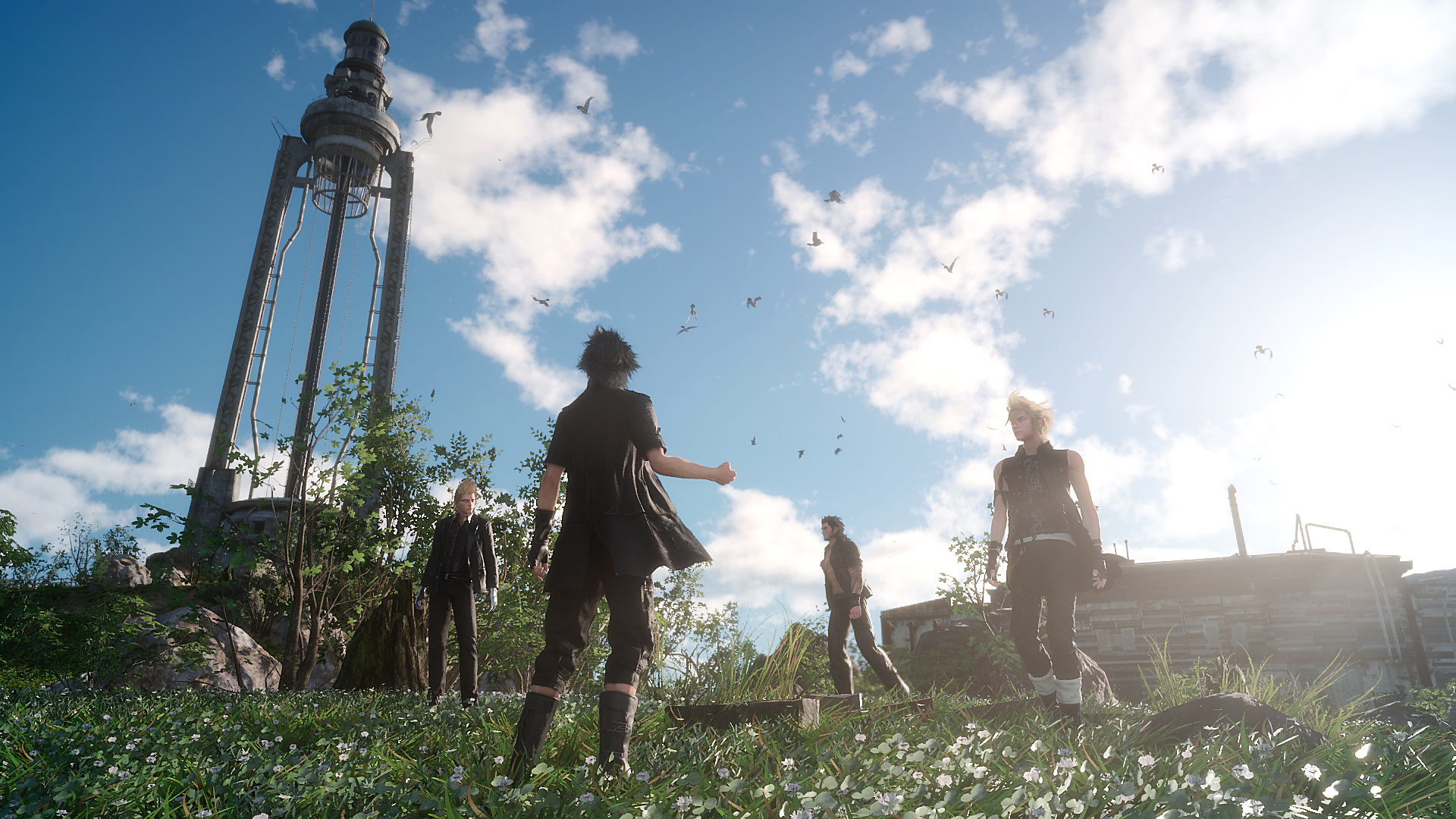 Being a RPG of sorts you do get the usual leveling options for using skills, selecting party member abilities and questing within the world. There's a ton of activities to do from collecting bounties on monsters to helping people or just exploring the incredibly detailed world. It's got an odd twist of modern technology with fantasy elements and it seems to work well here. The car is the focal point of your travels so you'll need to keep it close at all times. It provides your options for fast traveling and escaping as night time brings terrible demons out. I wish it was a bit freer to use as you can only go along the road, but the stretches of driving on auto pilot were peaceful.

Being a game of fantasy there are a wide range of enemies to battle during your adventures and the combat was mostly great. It felt fluid with great particle effects as you unleashed abilities and sent out group commands to your friends. I did however find it incredibly repetitive and eventually boring after a many fights as it's basically just mash melee then dodge occasionally. It was also odd how damage worked since every creature could almost insta-kill me in a hit yet me team could each take a beating. There's also crafting available for magical effects, equipment managing for the team and skill trees that will affect combat. The game also features some narrative choices as you do certain tasks, but I didn't feel these had any effect on the experience. 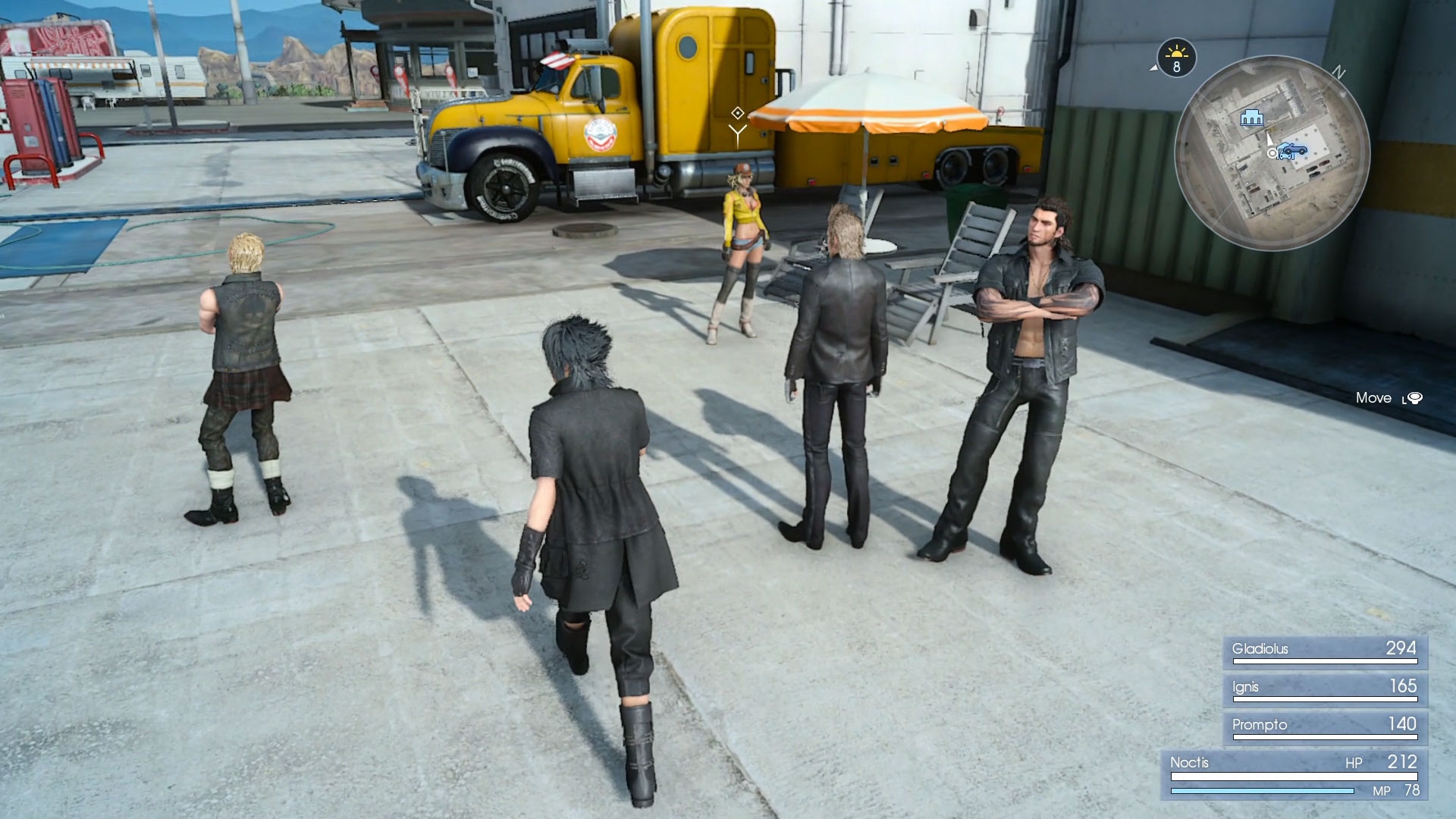 Final Fantasy XV is an intriguing tale that follows the adventures of these close friends in an incredible world. The music is absolutely fantastic as well providing extra life to the story. I did find some aspects of the story to be a bit off, this being mainly in the tone considering the gravity of what was happening in the world. While smooth I also found the combat to be repetitive after awhile and the game could have used some better checkpoints. It was annoying to restart a dungeon at times and instead of battling through it again, I'd resort to just running by everything. That aside, the story was at its best during smaller interactions and the more intimate scenes with the group were great.