The Jackbox Games have been a huge hit this generation and something my family now fondly looks forward to playing with the yearly releases. Just recently we were given a standalone Drawful 2 game which is similar to this pack and something I highly suggest checking out. That aside we're here to check out the third Jackbox Party Pack that includes Quiplash 2; Trivia Murder Party, Guesspionage, Fakin' It and Tee K.O. Each of these games brings a distinct aspect to the party pack and you can read into each of their descriptions below broken down by the game. In Jackbox you're able to easily play by having everyone just use their phones on a website to interact with the game, this can be done locally or online with streaming. It's set-up to be the perfect sort of party game in that way with even more features to improve streaming options and better control over the general experience. 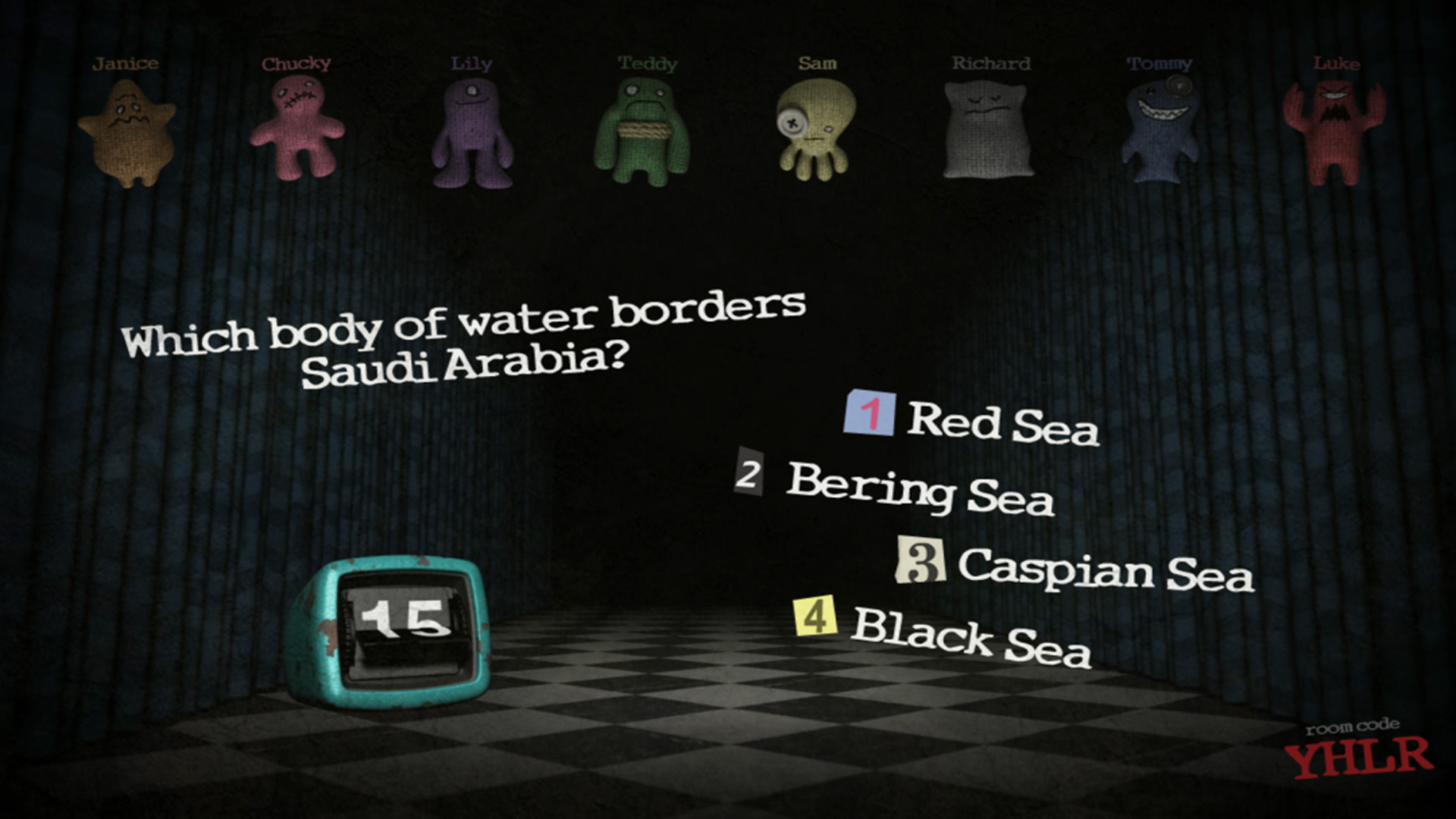 Quiplash returns once again in a game where you attempt to get the most votes by creating the best phrases. Everyone gets a couple sentences with the goal to find the best phrase to fit into it. These are often hilarious and the game has a great selection of new options to Quiplash with. New this time around are some slightly different final round variations and these greatly mix-up the match possibly changing the outcome entirely. I found this to be the strongest of the pack and while I was disappointed a new game didn't take the title Quiplash 2 is still great.

I somewhat enjoyed Trivia Murder Party as I found it to be a nice darker take on general trivia and it fit well into the collection. It was just that I was expecting something else by the name of the game, but it worked fine. In Murder Party you need to answer trivia correctly in order to not die. The wrong players of each round go into a sort of deathmatch where you battle it out in a randomly selected mini game to see if they progress. If they lose their poor creature gets stabbed with nails and becomes a ghost. This doesn't mean they're out though as they come back to haunt the survivors in that final round.

This one was a bit more on the interesting side of things being an oddity in this pack. In Guesspionage your goal is to guess the percentage of people that were polled for any number of topics. Once you put in a guess the rest of the lobby tries to guess how close you were and points are awarded that way. I didn't necessarily have any problems with it, it's just that this felt a bit out of place with the style of the other games in previous packs. It was more of a, that's an interesting fact instead of being full of laughs. I'll also mention they have a great audience feature where they become the polled group so that can mix things up if you have a large group of audience viewers.

In this one everyone responds to the task that's been given to them during the ground though someone is left out and will need to fake their way forward without the others putting the spotlight on them. Everyone will make the certain gestures as mentioned by their devices and after that you'll need to guess who was faking. This game was alright feeling a bit different than other selections of the pack and not great for streamers as there's the whole local gesture aspect.

Tee K.O is the drawing game of the pack which was both hilarious and definitely something to play multiple times. The goal is to draw a few pictures, have everyone create a series of random slogans and then they're sorted out randomly to create hilarious custom T-Shirts. These were hilarious in basically every round as you never knew what sort of crazy mix was going to show up. Players then get to vote on the best designs for points and a champion T-Shirt is crowned each round. I found this to be a strong addition and while not as amazing as Drawful it's a worthy drawing type game. You can also have the T-Shirt actually created and sent to for a fairly decent price at the end, social media sharing is also available for your designs. 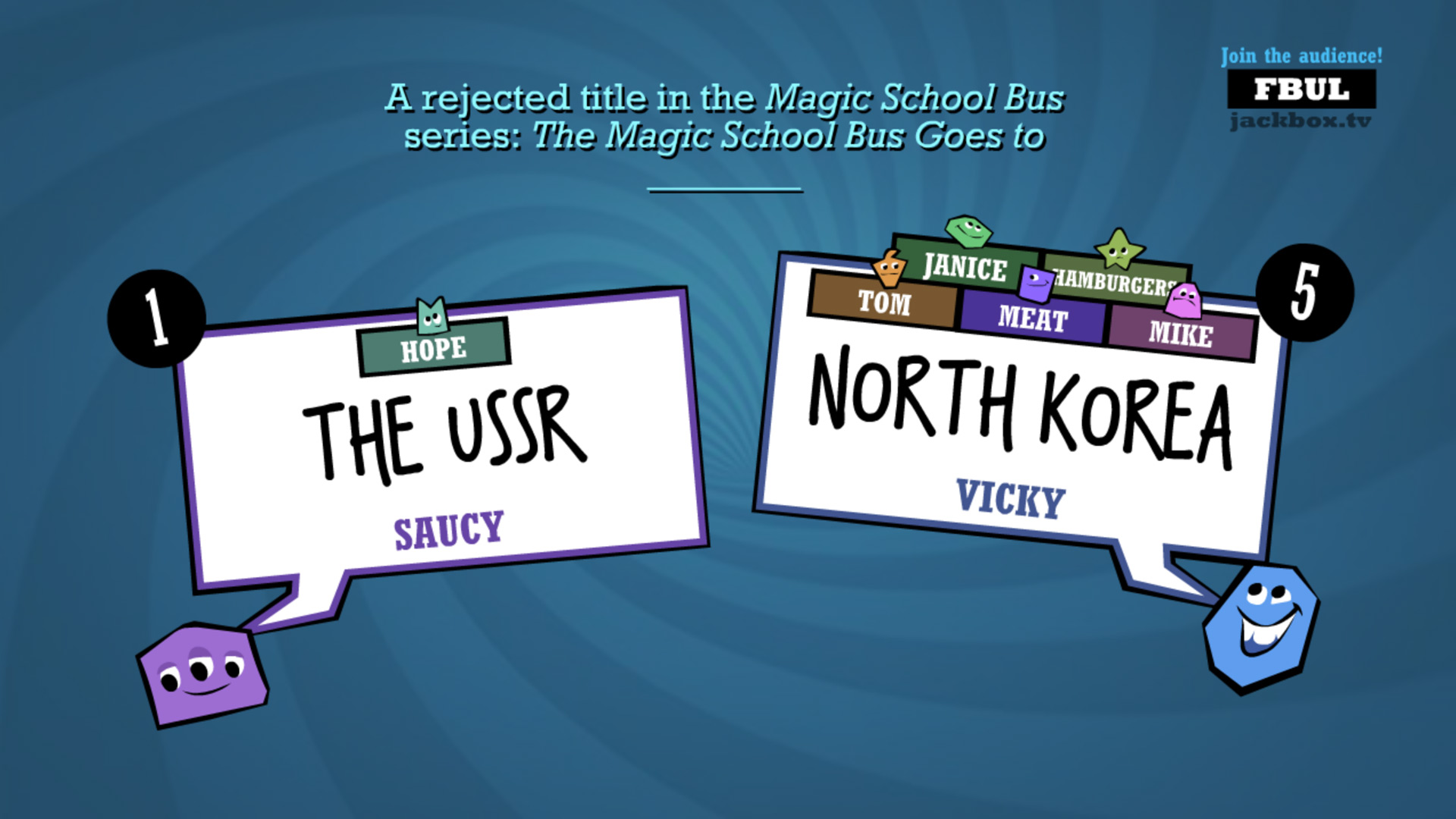 I love the Jackbox Games as they're entertaining and a great group activity with easy accessibility. Anyone with a phone or actually any internet enabled device can join in making it easy to get people playing. While I felt this pack wasn't the strongest of the Party Packs it still brings some solid new games into the mix that I'm sure will be enjoyed. Quiplash 2 once again shined here being hilarious with Trivia Murder Party and Tee K.O. providing great laughs as well. The other two weren't quite as great, but still solid games. I also found this pack to be more focused on larger groups as the previous packs did have better support for smaller numbers of players. If you want to keep the party going then this is a great addition and if you haven't yet tried the games before, it's still a solid entry point. I also want to mention that there are child friendly settings as well so any audience can enjoy the package and great streaming options.