"There's Been an Awakening"

I've been playing this Lego series since its inception back in the day and Lego Star Wars has always been my favorite. With the start of The Force Awakens the level take place on Endor for the end of Episode VI and is basically a display of just how far this series has come along. The entire purpose for that area is showing the beautiful environments and all the new features that have been included for this iteration. It looks great and also takes a much cinematic style of display than ever before with full voiced cutscenes along with intense over the shoulder shoot-outs. They also somehow managed to get the actual cast to voice new lines for their characters including Rey (Daisy Ridley) and Han Solo (Harrison Ford) as highlights. I was shocked that they actually got Ford to do the voice acting and that he actually sounded into it which was amazing. Daisy appeared to care a bit less as the difference between voice lines and hers were quite apparent which was disappointing, her performance did seem to improve over the game though. 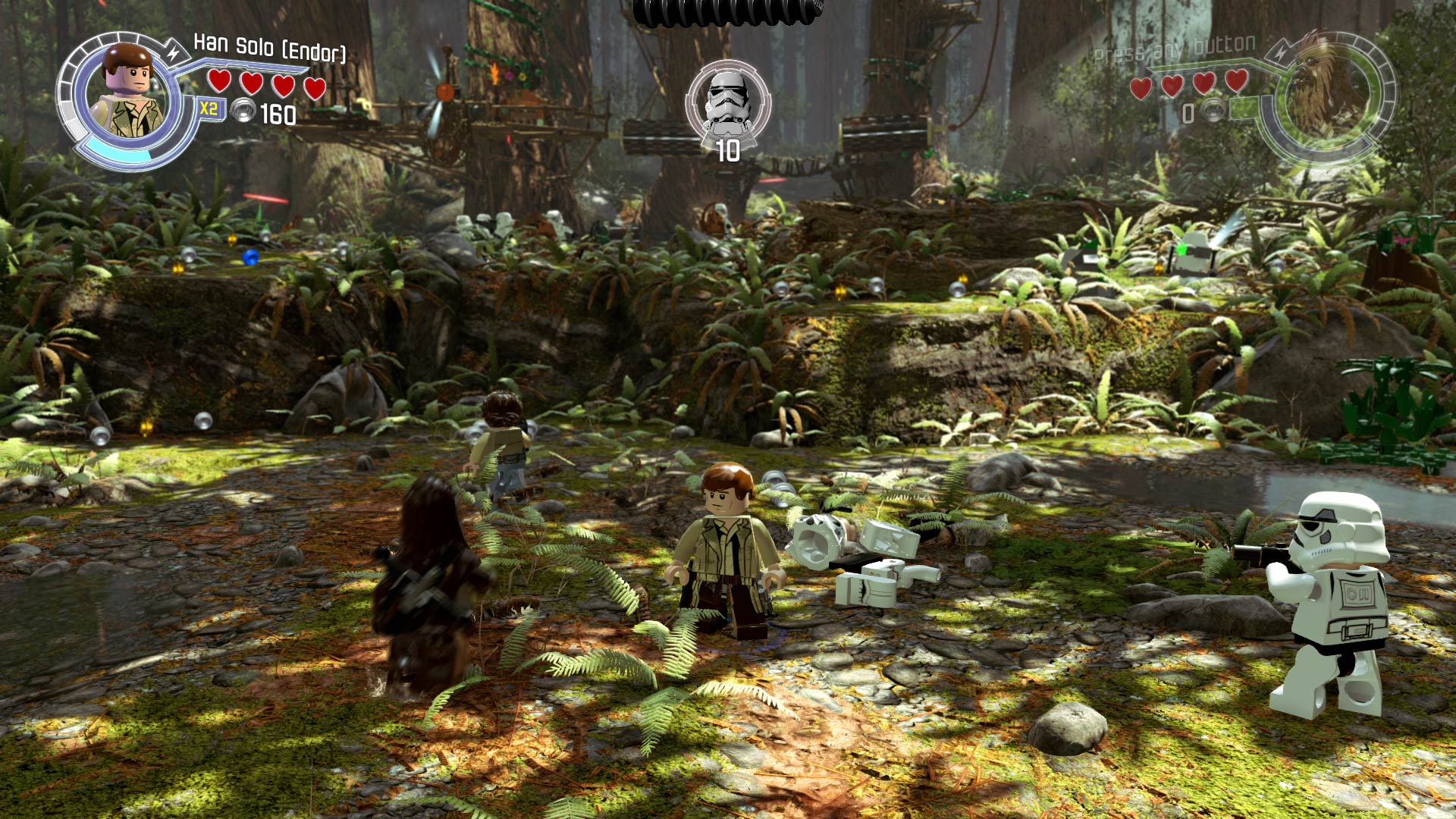 Going back to the game it weaves through the entire narrative of Episode VII while also adding in additional content which are confirmed canon to create a more in-depth experience. It was actually crazy that the game included space battles which smoothed over to levels and a number of switching areas between the larger cast which was nice. I would have liked a better hub area though as they opted for a selection of smaller ones which bridge the levels and can be found on each planet. There's a star map now in the game from which you can re-explore levels or tackle the side missions such as Rathtar Hunting with Han + Chewie or a number of other ones around collecting data from key characters which explores the backgrounds a bit better. Being one of the Lego games they've filled it with collectibles to grab which at this point if you've played any should be aware of. These include things such as minikits for special unlocks; red bricks for special power-ups and Carbonite bricks to unlock unique characters.

I found this game to be a bit easier than past titles as it was focused on cinematic moments. Aside from the traditional building or movement through linear levels such in past titles we have a bit more choice. There are now special build moments which allow multi-builds in areas though most of the time these needed to be done in a single way, in the future I hope this expanded for a choice of how to complete areas. The shooting gallery type cinematic areas were well done being exciting and not annoying as I had thought they would be. I did have a problem with how much BB8 was used, I get he's adorable though there's a full cast to use aside from the little droid. The game features a massive roster, hub worlds to explore and hours of gameplay depending on how intense you get on collectible hunting. The environments are also much more beautiful than ever before with Endor particularly shining as it shows the progression in the series. They also managed to finally make space battles interesting and fun whereas other Star Wars titles have yet to be able to do that even. A staple of the series is also the ability for drop-in/drop-out local cooperative play and again it would be nice to see online play be enabled again someday. 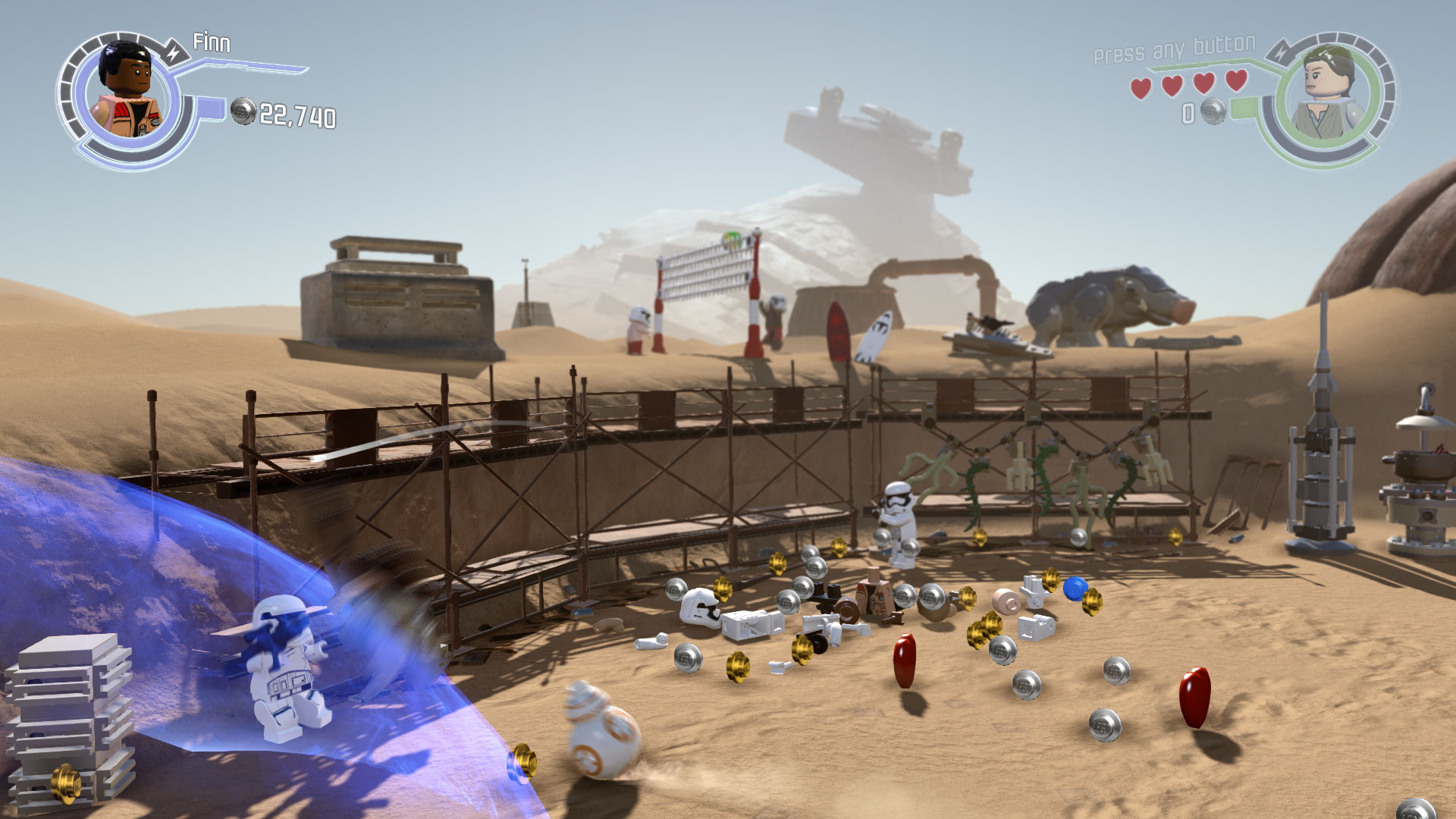 LEGO Star Wars: The Force Awakens is shining example of how far the series has progressed over the years doing a great job at expanding the return of Star Wars. It's a great title for all ages offering unique building opportunities, hours of campaign levels and tons of replay collecting all the hidden objects in the world. Most importantly it's a fun game bringing in many references, laughs and mixing voice acting into it as well. The series has never been so cinematic in design making each moment shine and amazingly all of the new features fit well into the franchise.