Prison Architect has now fully released for consoles bringing with it a full simulation title to a place that normally does not fare well with them. I was greatly impressed by the vast creativity provided by the title that seemed to offer everything its PC counterpart did without compromise. The controls were also well done being simple with little effort to fully understand all the systems involved with getting a standard prison running in no time. It's also a game you can just lose hours to building aspects of your prison while attempting to keep everything orderly in the process. You can also basically build whatever sort of prison you'd like and with time grow that to include whatever you'd like. You can focus on gathering large prisoner numbers for good revenue or provide a better quality of life for those that are living within your cells already. With my time in the game through a few differing prisons I've experienced prisoner death; escape, parole and even riots which shows the game clearly captures all aspects of a prison. It also includes a number of story levels if you don't want to jump into things that are filled with stunning themes I didn't expect. These mostly aim to teach players the basics of running the prison and getting things going so might be worth checking out or you can just jump into things. There are a number of differing options you can choose between when starting out whether you want a challenge or more fun run. If you're also interested in what others are doing with their prisons you can also download or upload some online in an easy to use prison browser.

The game takes the over the top approach as that makes sense with multiple options for zooming in and out or even following certain personnel. From there the D-Pad is really your control area allowing you to switch between all the options in the game. Whether that's through the various build sections of free or pre-fab creation to expand your prison building or the various behind the scenes actions of logistiscs, hiring new workers or researching new abilities to run the place more effectively. Aside from just creating buildings you also need to run the power, water and the setup of how criminals spend their days. Some will also eventually want better living conditions so watch for that or bloody riots will begin which are no fun for anyone. Prison Architect also looks great carrying a cartoon theme with tons of unique characters each with personalities and its absolute madness when you have a few hundred characters living their day to day prison lives. 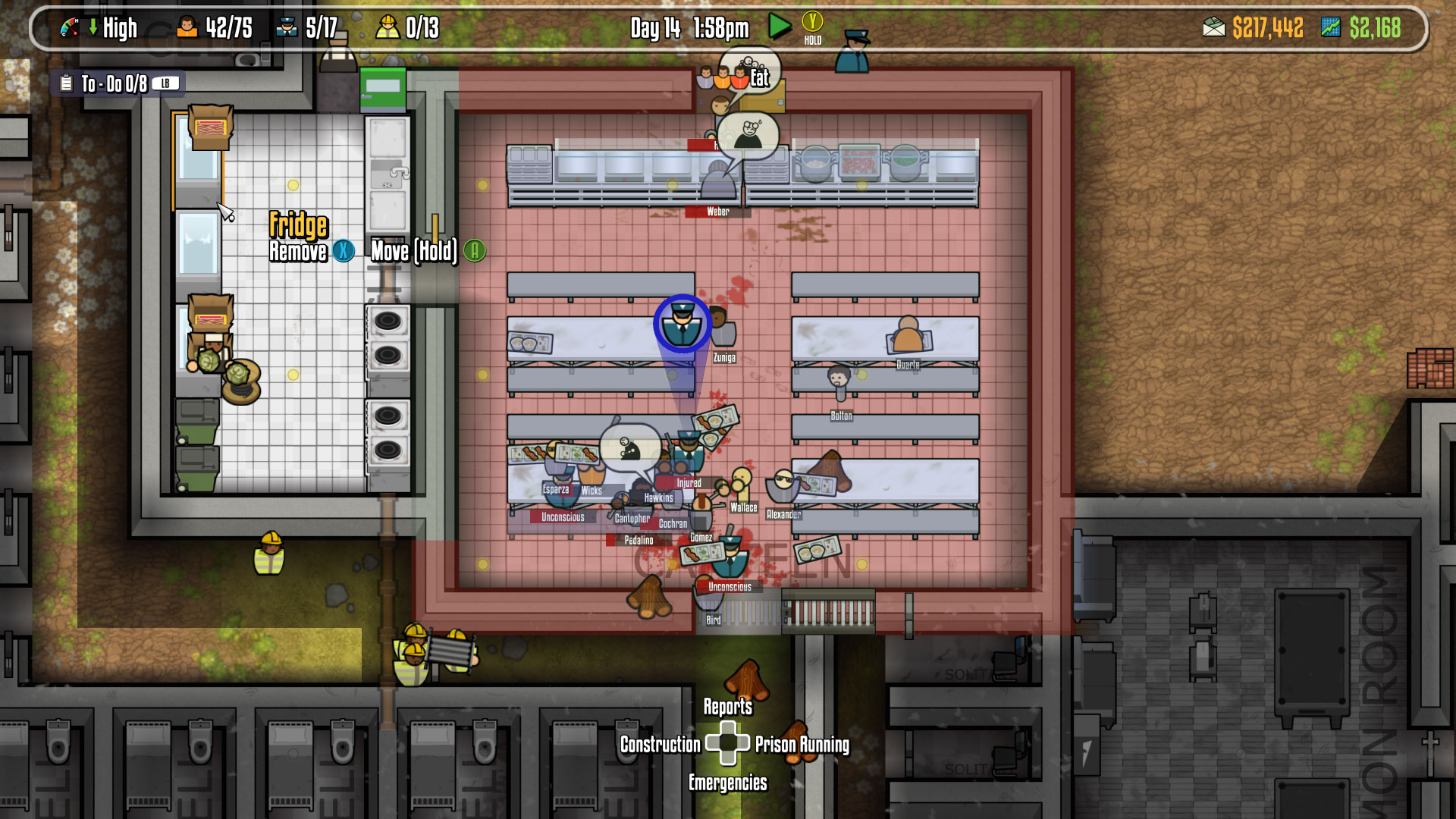 Prison Architect is a great simulation game covering every little aspect of prison life and even going beyond that. It's a fun title that will definitely make you lose hours as you get lost in the aggressive circle of trying to get the prison running smoothly. You'll need to hire people, order prisoners of various law breaking levels and keep everyone in line by controlling their schedules. You also get the choice of being whatever Warden you'd like to be with so many in-depth, yet easy to access areas. I had a ton of fun playing Prison Architect while it's been in development for the console and now that it's released it proves that simulation games can work flawlessly on consoles.