Taking the format for a detective show Party Hard we see the perspective of this poor cop being questioned about the proceedings of the party murders. After that's done we jump into the shoes of a guy that really just wanted to get some quiet, then we begin killing people. Now these killings can be done in any manner you want and you have to kill every single person. It's actually sort of hard, yet makes sense to leave no witnesses at the scene. There's multiple ways to go about killing all these people from just standard quick knife attacks to using the environment to your advantage. Things for your use include poisoning drinks, throwing people in fire pits or triggering massively deadly events. One of my favorites was turning on a model car which rolled over an annoying bouncer and about twenty people at once. These events and basically triggering these happenings was great, I enjoyed it a tad too much at times to be honest. The world is pixel style with so many great minor mentions to other pieces of culture as you see a Mario type character come to patch escape routes or Darth Vader walk by. Smaller mentions like this really build the atmosphere of the party with some great comedy while I'm routinely cutting folks up when they break from groups. One aspect I didn't like which really wrecked gameplay for me was the overbearing police. It seemed that every time they would catch me unless I cheated using a quick exit they couldn't use or change disguise since you get helpful things hidden around. This makes it difficult to get anything done as it's really easy to lose or even be killed by other aspects like driving by cars.

Taking the pixel are route this game looks actually quite great with many smaller details that make everything feel special. There's a number of differing levels present which each bring their own look into play ranging from club scenes to a house party of even heading out to a biker event. These each had great setups and also entertaining events going on as well. I also liked that every play of the map changed certain items that could be used to take out people. This kept it fresh, yet slightly more difficult as well having to re-adjust the strategy. For the console version they've also added in a number of new environmental events including the occasional drug deal going on which really does help in mixing things up which is great for those that had previously played the game. 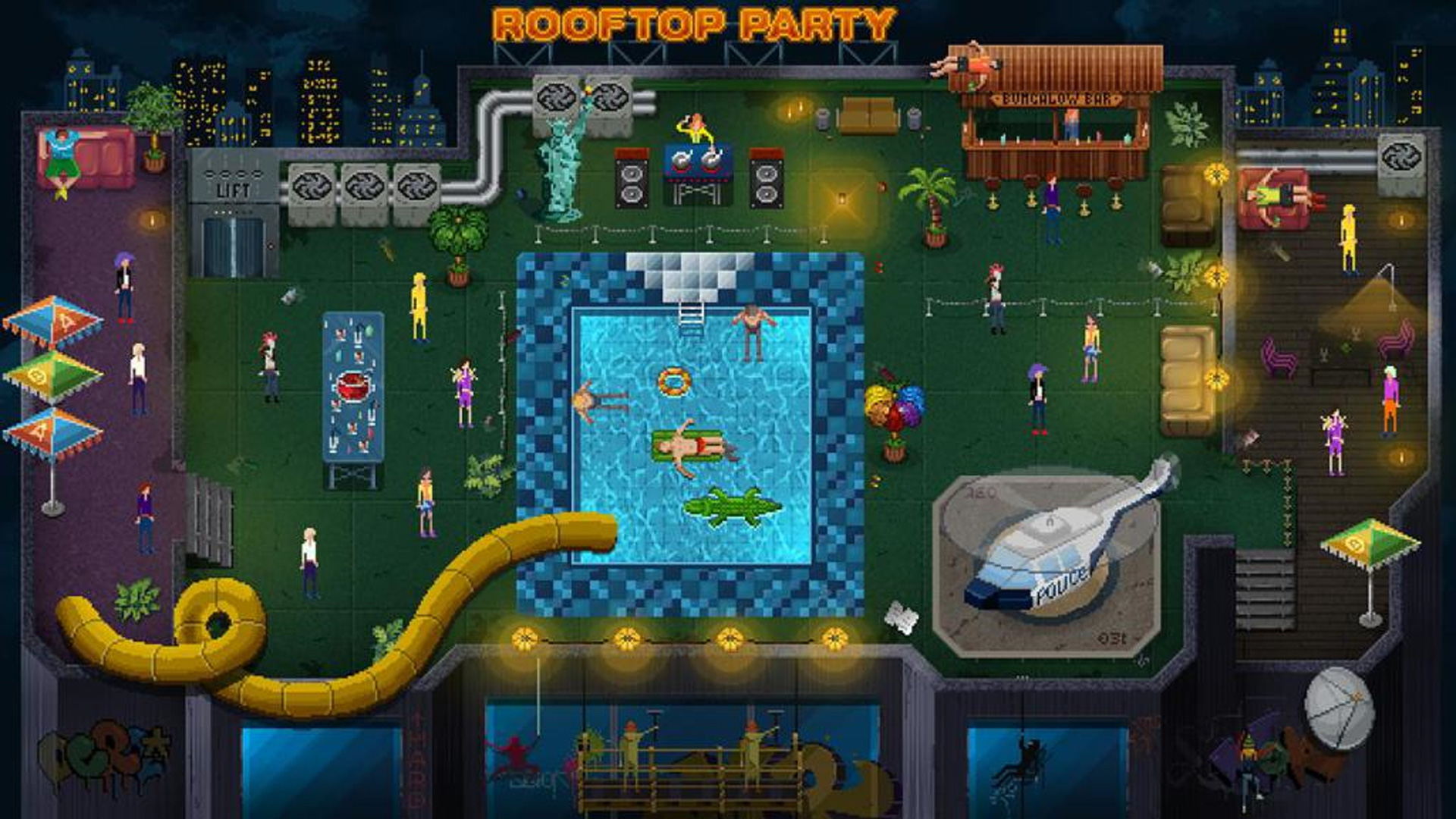 I felt that there should have maybe been an alternate mode to lessen the police presence or even strength at catching you to make it more fun. I felt that the cop took out much of the enjoyment within the game as they would constantly hunt you down easily to end your mission and would have to repeat. It felt great when I did finally accomplish my goal of killing everyone at the party and dance your way further. There were also some nice quiet moments present like dancing to fit in if you'd like and just sort of chilling at these parties. I completely understand where the guy is coming from with wanting some silence from the neighbors and he stepped up to do what was needed to get what he wanted. Party Hard was actually really entertaining for me and I had a great time playing, just wish it was easier to progress as the difficulty was a tad too much. As far as what's the new the game should feel very much like the PC version and even the new additions I mentioned might have just been placed in updates during my absence. Still, it's a great game that's strategic, stressful and fun at the same time.