The world is being invaded by a series of random red circle bubbles that bounce around on the surface and as a single brother or in a group cooperatively you need to destroy these. The game is split into three modes with a standard tour mode that has a number of chapter areas each with a number of levels to play. When working through that area the game unlocks the other two modes including Score and Panic mode. Score attack is a more limited mode where you need to work for the best score and panic mode is just intense mania seeing how long you can survive an endless onslaught of bubbles. The game is very simple placing you within a small square area and launching these bubbles against you. The colors change along with the formation and occasionally a boss fight gets thrown in though it's not entirely creative in providing new spaces. This creates a somewhat repetitive atmosphere and despite the difference in modes it feels very much the same throughout the experience. The game as mentioned can be played in two player coop which is a lot of fun offering the ability to revive each other compared to just dying by yourself. To complete each level you need to beat the bubbles or boss and there's also an additional scoring layer involved if you want to reach the targeted points.

The game looks decent with a cartoon art style which is very reminiscent of arcade style. It looks nice in that regard with bright colors, but a very bland world. Nothing really changes aside from colors and the backdrop for each level and that gets too repetitive after awhile. It all plays quite well with a scoring system that makes sense, but it isn't that exciting to play. You basically just shoot a harpoon grappling hook in the air while moving away from bouncing bubbles. That's it aside from the occasional upgrade that drops including a gun or time stoppage, it just didn't feeling very compelling. Playing in coop was great though it's just a duplicate of the first character and doesn't really change much of the experience. 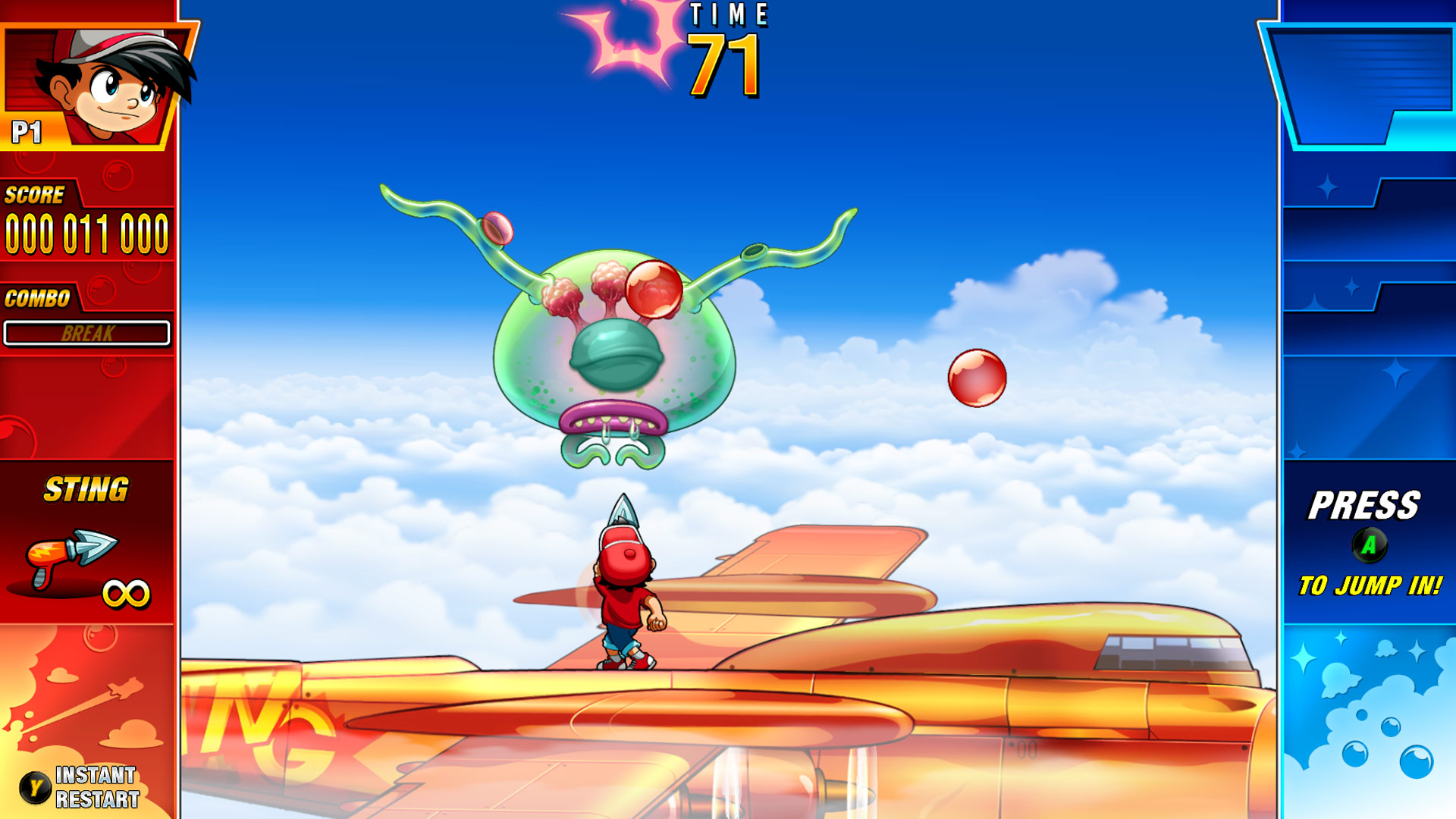 Pang Adventures is a decent title for those that enjoy popping things or moving aside from bubbles. It's a unique title for sure, but it's not that interesting and I was rather bored when playing it. The coop mode is more fun, though it doesn't do that much in improving the experience. There's a good amount of gameplay for those that do enjoy these types of games and a fair selection of modes, but still not entirely compelling. I also liked the colors in the game as they were bright and cheerful as many titles are scared to do these days and they still didn't add enough variation into the experience. The boss battles were somewhat unique though even those were a slightly variation on the rest of the game.