Playing through Quantum Break on Xbox One was fantastic and the game just looks so great on there with perfect performance. This definitely got me excited for the Windows 10 version to see the game in glorious 4k and it looks even better. It's hard to improve on what I'd consider perfection, but compared to consoles it feels ultra realistic. The textures and gameplay on PC is incredibly fluid with a world that feels too alive. Being on PC there are some changes and interesting features with multiple resolution options and fps locking if you'd like. There's also a very large list of features with multiple options to get the game running perfectly well for your rig. I have noticed some visual issues and it can be quite demanding.

You can also play with either the keyboard of controller, but coming from Xbox it's what I'm comfortable with. I did also try with the keyboard and mouse with it working well with solid controls. The game also features the full ability to share game saves with Xbox One which is incredible and allowed me to pick up where I was to choose some new sides of the story again. It also shares an achievement list with Xbox One which is somewhat disappointing for those that want them to stack, but it's nice to feel the two versions so unified. The best thing to take away from this game is that it looks even better on PC and no matter where you play this game it's a perfect experience. The original review follows which highlights in-depth the campaign story and gameplay for Quantum Break. 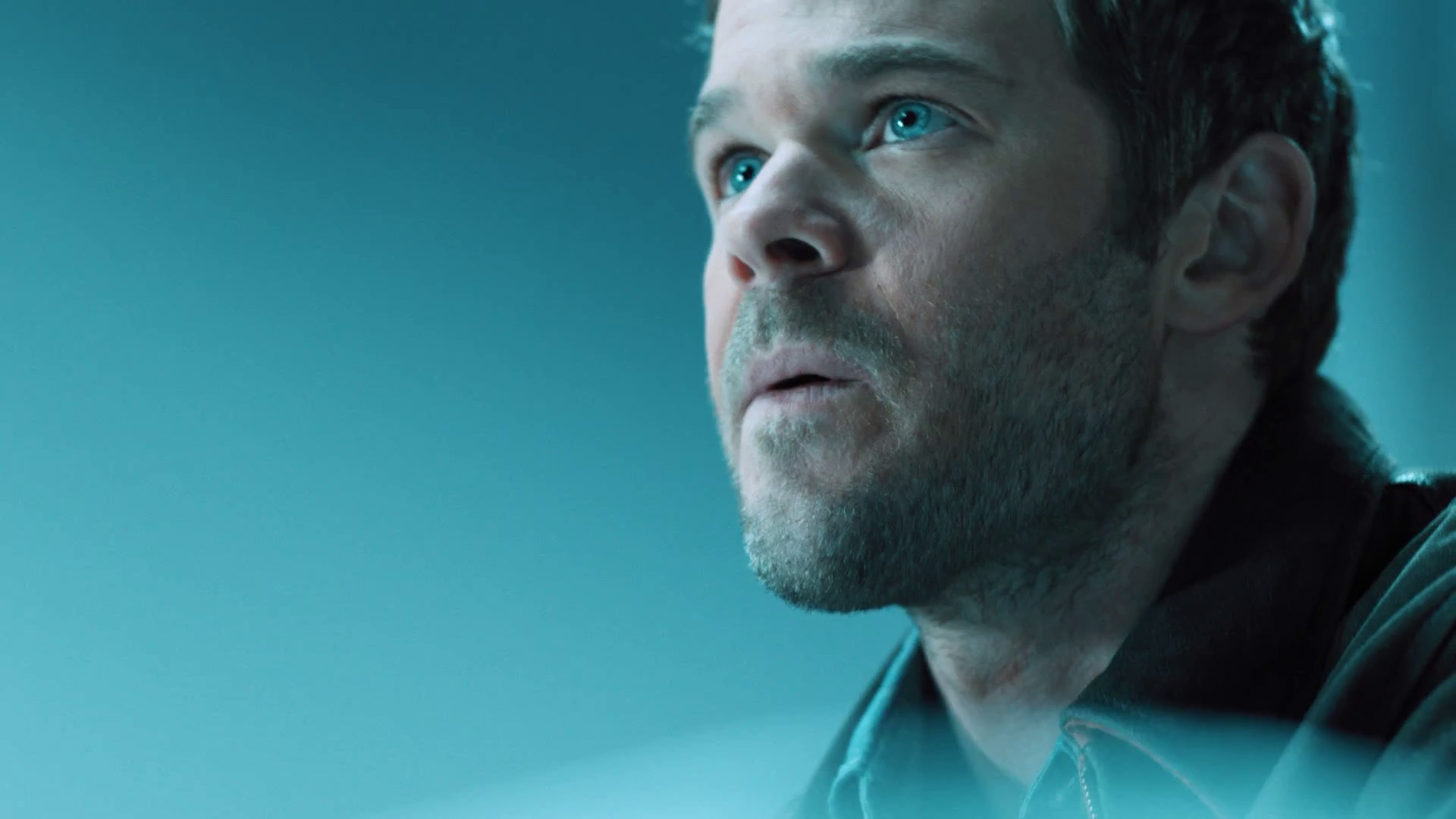 Original review follows with PC details
Quantum Break is much more than just a game, with this defining title Remedy aims to blur the lines of interactive entertainment. Not only does this title ascend regular games in design, but it will also be one of the defining games of this generation. The game follows the story of Jack Joyce played by Shawn Ashmore as he's brought into the world of time travel and manipulation. It starts off easy with Jack being called in by his old friend Paul (played by Aidan Gillen) in order to check up on his brother William's (Dominic Monaghan) work on what's quickly discovered is a time machine. Not only does this game weave an intricate story of choice and gameplay it also brings a stellar cast together for what's a truly unique title. Things obviously go crazy when everyone meets at this first setting which creates a time loop sending everyone on a path towards stopping the end of time itself. It's more about seeing the ways that each side goes about their business in doing so and not everything is as straight forward as it seems. Quantum Break is split into five distinct acts each with a number of parts in-between that build towards the next portion. At the end of the first four you also get what's called a Junction choice where you get to make a decision that will impact not only the next area, but the entire game itself. The choices give you a bit of a brief cause and affect which you then can choose between the two. This is always done from Paul's perspective which is interesting as you're directly changing what will happen to your character and also seeing a different side of the story in what Paul is attempting to accomplish. 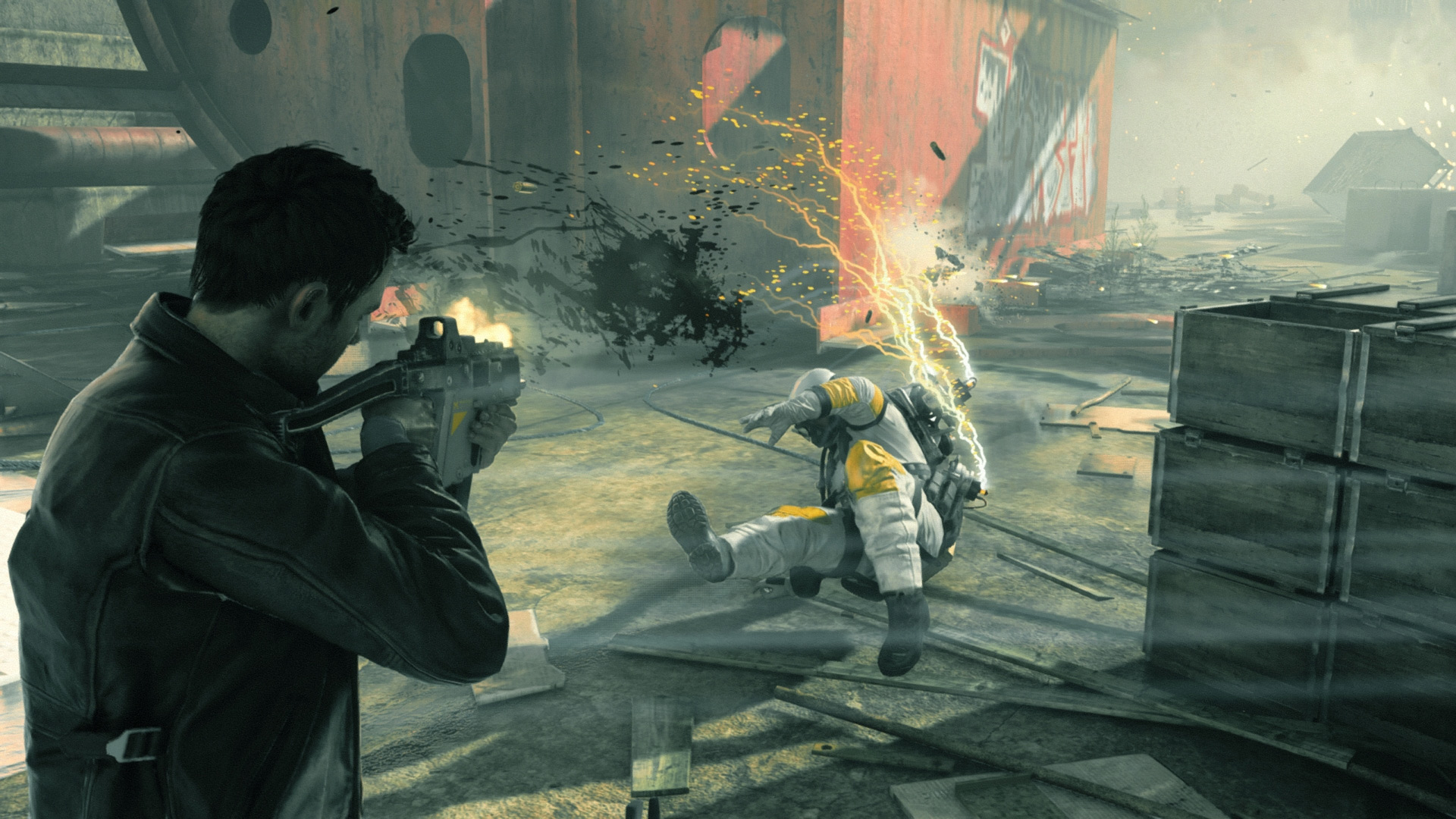 Once that choice is made you're given a live action cutscene which is about a half hour each go which builds the story. While some might think that it would be odd to have a live action video in the middle of a game I found it was perfect. You get to play for a bit, then sit back and relax as the video builds the story instead of it being a direct game. These sections focused more on the events surrounding Jack with the building of key side characters and showing what's going on in this world. It does weave perfectly into the actual game and is essential to creating this astounding story. Together these build a strong story with great pacing and characters you quickly grow to care about. It may be the mix of real actors or even the amount of quality put into capturing the facial expressions that just make the story feel so lively. There are the moments of great action followed by emotional sections and a story that evolves with the decisions you make so even multiple playthroughs keep things fresh. The world is also amazing with such great graphical detail in the world that even the smallest of words are readable and when the world freezes in time it's the best. There are these great pauses in time where you can just freely venture between all these frozen people and the interactions with the world during this time is great as bits of whatever are floating about. There is some action sequences built into this whole frozen area place and it's just so amazing. The game also does a fantastic job of melding cinematic cutscenes with regular gameplay while having no graphical break between the two and even cutscenes are at a minimal. 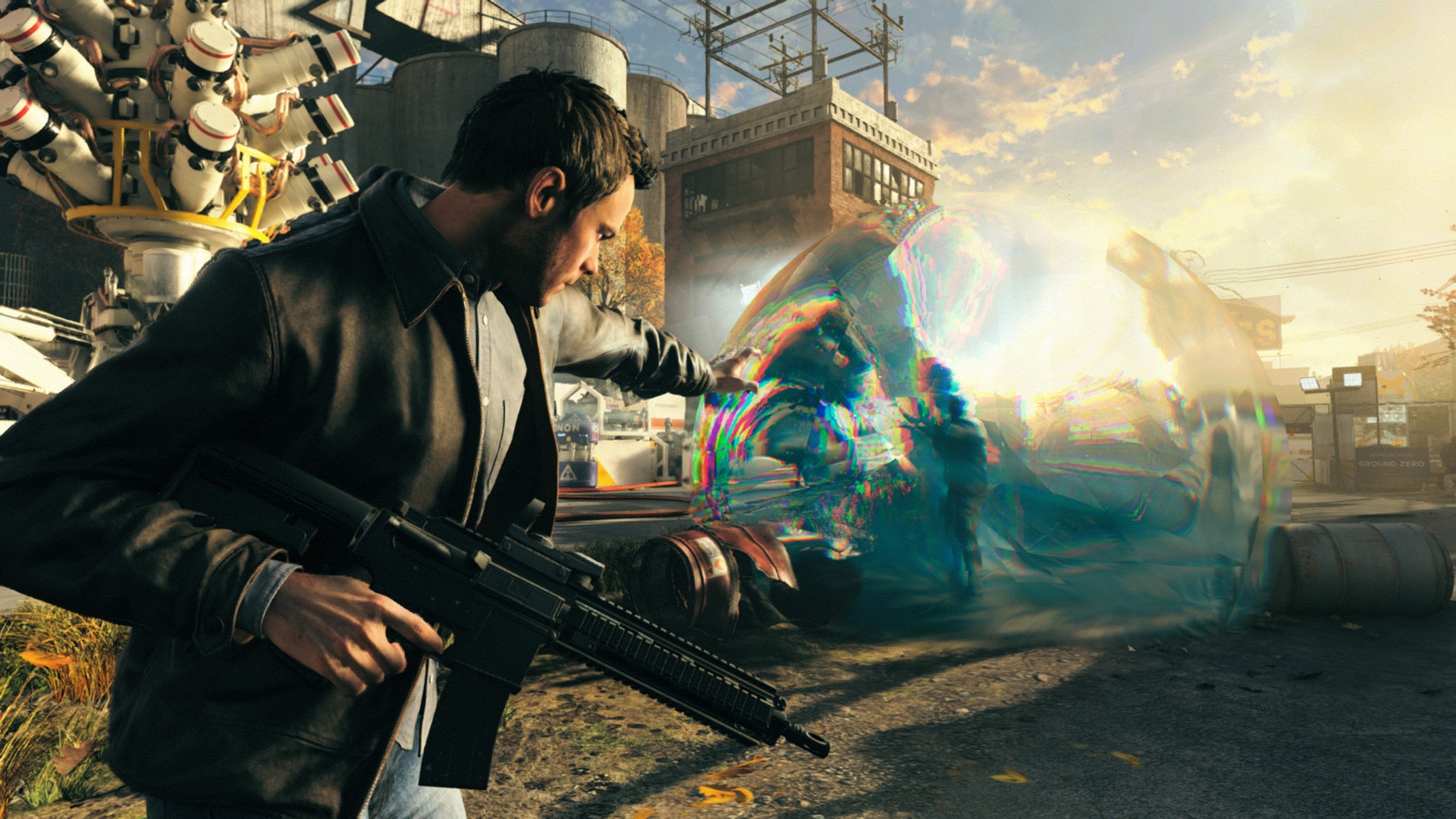 Quantum Break looks and feels fantastic with such fluid motions within the world. Playing with time is one of the best and most fun experiences I've had in gaming for awhile. You slowly build up this set of abilities while progressing and discovering more ways to manipulate time. This includes things such as slow motion; pausing places, quick dashing, creating a shield and throwing a burst of power against enemies. Combing these together in various ways along with gun fire is incredibly being great fun to control. Skills can also be upgraded by finding extra power points hidden to the side and these mostly just improve your abilities. The environments also build into these powers as there are some puzzles to solve by playing around with time by rewinding or switching the time of things. Aside from puzzle solving you also get to see some areas displaying the aftermath of time warping which are unbelievable in scale. The environments in the game are truly spectacular with such amazing depth and realism for a natural world. Whether that's pristine offices or broken areas you adventure through, they all look stunning. 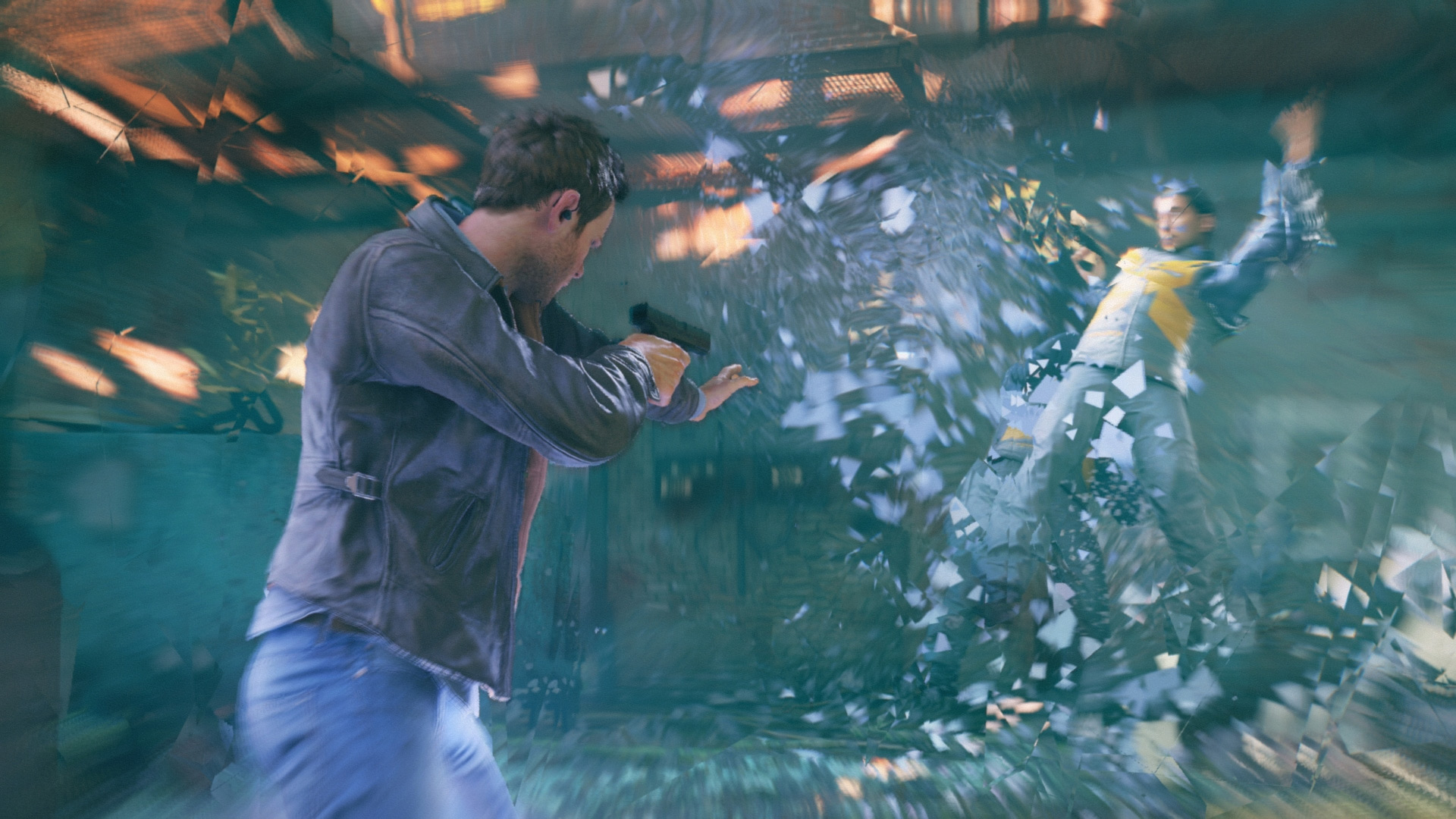 Simply put, Quantum Break is one of the best games I've ever played and will always stand as one of my favorites looking into the future. The game is amazing with some incredibly detailed environments with the blend of gameplay and live action shows that tie together so perfectly. You get a solid amount of gameplay that builds a strong narrative and then a bit of relaxation after the decision junction with the live action show. Your decisions also matter not only in the videos you watch, but also within the game itself having direct effect on the world. The cast is stellar bringing a new genreation of talent into the game with great emotion and perfect facial capturing. There's so much expression present not only during cutscenes, but also the live action shows and just watching the character's expressions while they move around. The combination of time with gun fire is nothing short of extraordinary and just a ton of fun to play. Quantum Break is one of the best games I've ever played and will definitely be one of the defining games during this generation of gaming. It sets a precedent with its use of weaving gameplay and live action video together with play interaction between the two to build towards something hopefully other games can take advantage of in the future.