The prologue of 101 Ways to Die begins with the story of the reclusive Dr. Spluttunfuder retreating to the catacombs below his estate to complete his life’s work of finding every way to die. An unfortunate accident destroys his work, and being too weary to start again himself, he hires a lab assistant to recreate the 101 Ways to Die. Playing as Dr. Spluttunfuder’s newly hired Lab Assistant, you are introduced to the Spatts. Splatts are artificial beings grown by the Doctor to be the test subjects in the experiments. They are single minded in that they will head straight for the exit of the test area. Your job is to make sure that they never make it. Using the traps and weapons at your disposal, your job is to booby trap the room, making sure that the Splatts take enough punishment to kill them, or make sure they are flung into the many pitfalls that they will normally avoid on their own volition. Allowing too many Splatts to escape will cause the experiment to fail. After an experiment you can check the replay of your trap placement letting you find the weak points in your strategy, and tweak it to make sure you fulfill the experiment’s requirements. Experiments are graded in points with stars being awarded for achieving certain criteria. Collecting enough stars will grant you access to different areas of the lab leading to different tools of destruction, and newer versions of the Splatts which will require ever evolving strategies as you work to recreate the 101 Ways to Die.

Visually, 101 Ways to Die is clean graphically, with the environments having a very Steampunk feel. The labs are bolted together with animated steam vents and fans, broken reel-to-reel computers, and electrical sparks flying to give a real Mad Scientist’s Lab atmosphere to the game. The only soundtrack is the symphony of the Splatt’s panicked screams as they try to escape their demise. Upon beginning any stage, you have the opportunity to place any tools at your disposal. Here you can check all the constraints of the experiment making sure to max out the stars earned. This point will also tell you the components that make up a Way to Die including the order in which the traps need to be set. Once satisfied with the trap layout, you summon the Splatts and watch them walk through your gauntlet. Certain traps like cannons and stun bombs may be triggered manually, and often the timing will make or break an experiment. A replay video is available after every round, allowing to see why a particular combo may not have worked the way you wanted it to, letting you replace elements for a better score. Backing out to the main menu after a round lets you move around the lab a bit. To the left of the missions is the Help menu for adjusting game options. To the right is “The Vault,” here is where the game tracks your stats, the WTD that you have unlocked, and achievements right in game. I thought being able to check the achievements in game was a nice touch, even if there was no progress tracking. 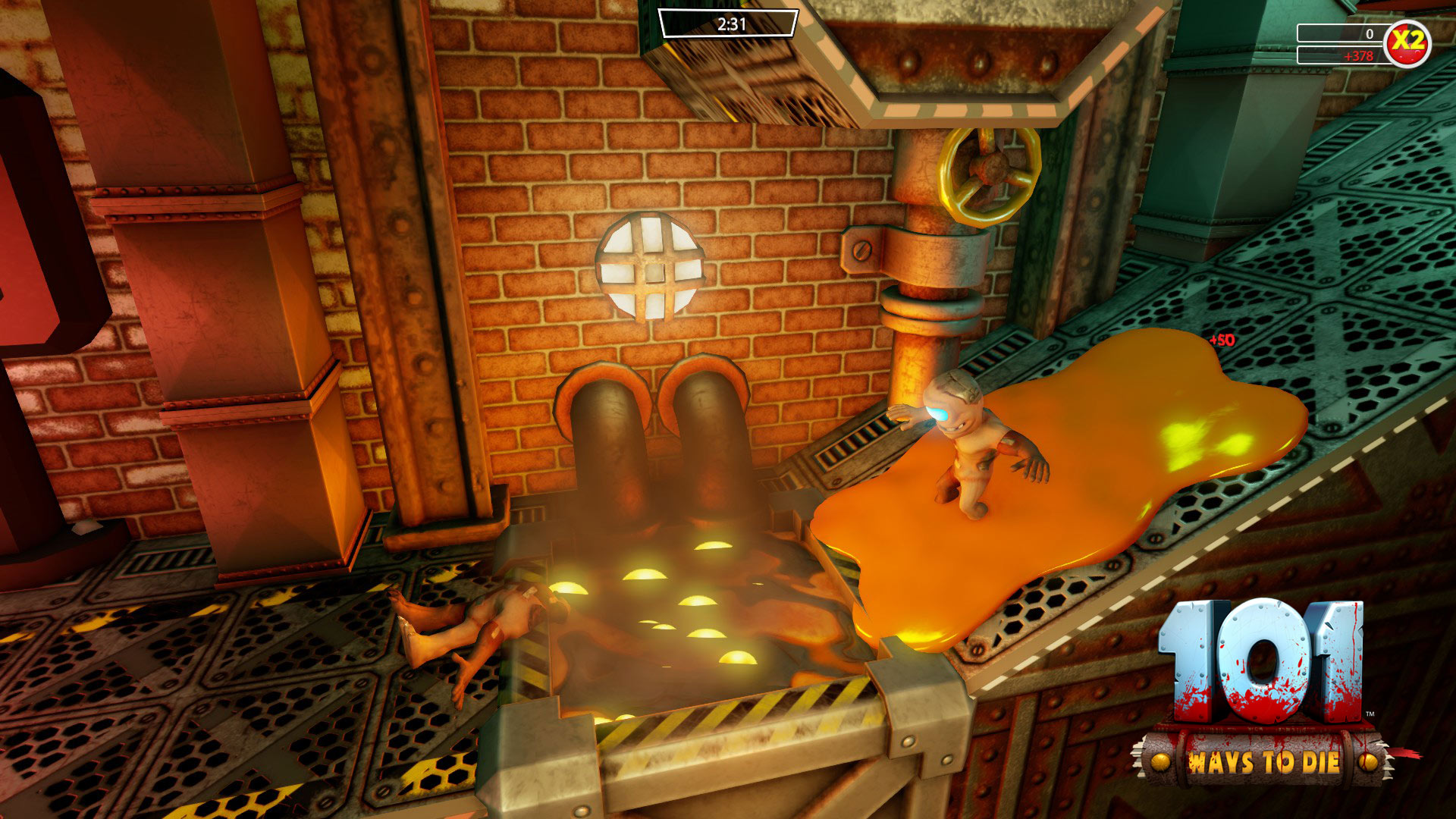 I found 101 Ways to Die an enjoyable puzzler. The physics were done well, and while some of the spring traps needed their trajectories to be more precise, sometimes a Splatt just needed to be thrown into the nearest spiked wall. Having the Ways to Die spelled out at the beginning of the experiment, and not having to figure them out on your own, made for more creative placements of the traps. The replay video feature was key in seeing why a trap did not perform as expected. Studying these eliminated much of the guesswork when relaying traps. While the plot may be in questionable taste, 101 Ways to Die offers a unique spin on physics based puzzlers.