Just Cause 3 picks up some time after the events of the last entry with Rico returning to his home of Medici which is a gorgeous island landscape within the Mediterranean. The island is based around a couple larger areas and some small chain islands which make up the many provinces of this land that are under the control of this wild dictator. Rico of course aims to free his people from this regime and works together with many old friends in an effort to do so. This is mostly accomplished through mass destruction, liberation of the provinces and dealing with other wacky occurrences that your group of friends set up. The world itself is a massive paradise filled with things to do and basically open exploration which brings almost an ultimate freedom. There are also so many ways to explore this land whether that is on land, from the sky or boating around. I loved this feeling of open space though at times it did feel less focused than maybe it should have been since I initially had difficulty finding out where I was going to do mission tasks as I wanted to get a grasp on the story.

The narrative actually does a great job in presenting a war torn environment despite citizens really being oblivious and also manages to spread out your adventure across Medici. This is great as it actually forces you to come up with unique ways to travel to some places or allows you to get a bit lost or sidetracked with things. These things mostly being the liberation of towns from the dictator where you'll need to destroy fuel canisters, cause disturbances in the prison and take down prides of their oppressor. The explosions and generally hectic moments were great, though got repetitive after liberating a pile of spots and the lowered framerate in some moments made things feel like slow motion. That relatively ruined some of the experiences since it was so cool seeing massive chains of explosives go off only for everything to slow right down. This mostly just appears during heavy moments though I still would have loved to see some smooth explosions with tons of gun fire without issues. Ultimately, I did enjoy the ventures of Rico across Medici and aside from the core campaign there truly are so many other things to do places to explore. 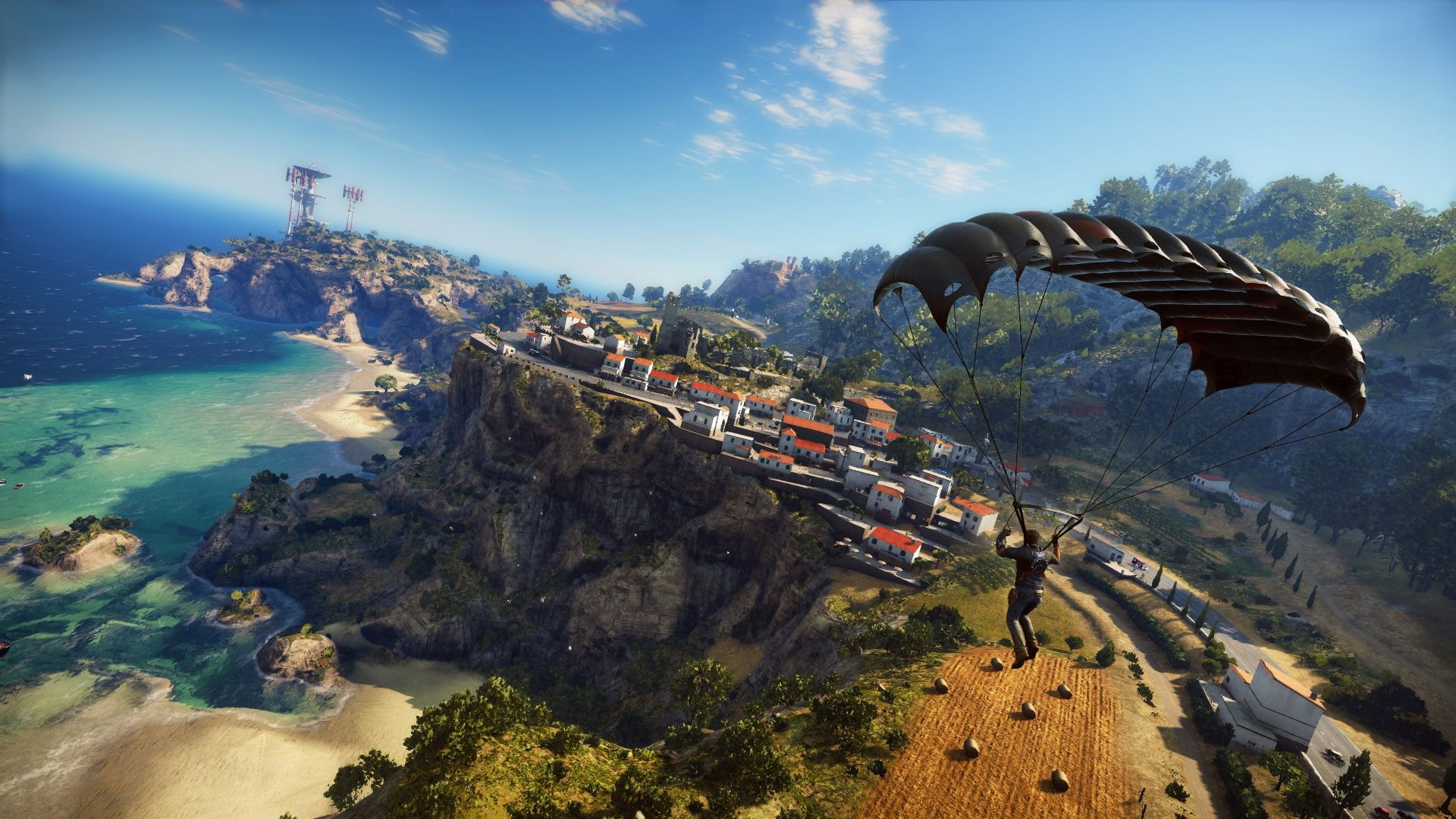 The game looks stunning, it's a beautiful tropical location that's filled with small details that make the world so special and best of all it's just open for exploration. You can check out ancient ruins within propaganda filled city streets or run through the waves of colorful flowers that outline the countryside. This was really lovely and it's even better to wingsuit glide around or jump under the waves for a fully detail coral seabed. The amount of detail present is outstanding and makes for a really great experience for anyone. Another big part of Just Cause is the grappling and movement system. Rico has a number of abilities including a parachute; wingsuit, grappling hooks and the ability to ride any vehicle. The grappling hook also had a great secondary ability from which you could basically attach explosives together using it as a tether cable or even just pull things to the ground like I enjoyed doing to enemy helicopters! I did however find some annoyances with the movement system as I would get caught on things or just be slightly lower than where I wanted to be. Using these combinations was the best way to travel since it was faster than a car and more agile though for wide distances I'd suggest copter flying and that in itself is a thrill. Overall it can be a crazy thrill ride if you chain Rico's abilities perfectly though there will be issues that do arise 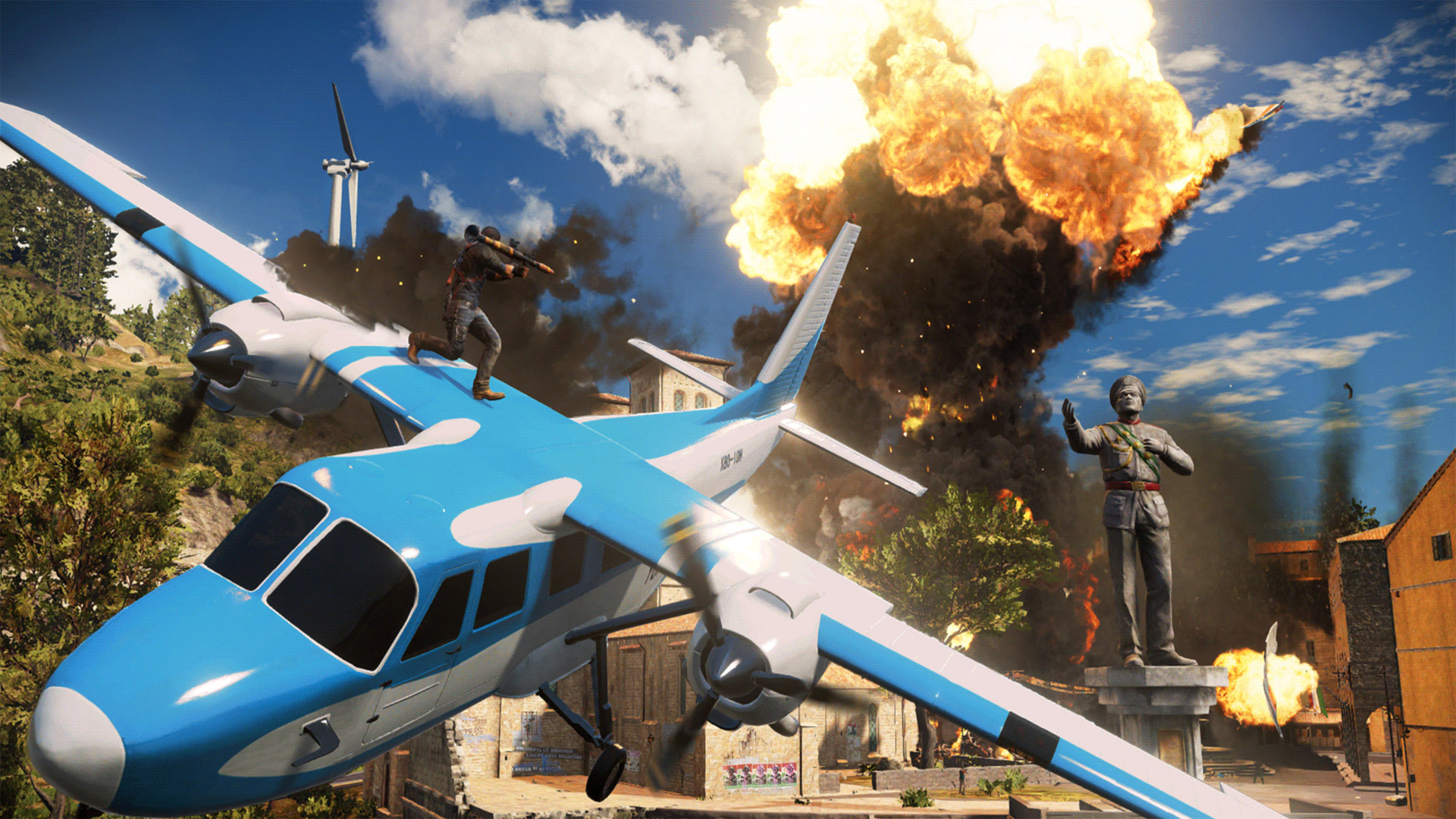 Just Cause 3 did a great job in creating a massive world for you to explore taking a great amount of time with detail and an overlay of dictatorship. The story was interesting with some wacky characters which made for an adventurous time across the campaign though there were also many side things to take part in as well. I did have problems with the game going into slow motion and some minor glitches that appeared throughout the experience which somewhat hindered a full experience. I also came across slow load times with the game that I normally don't mind for these games though when deaths occurred multiple times since there were overwhelming moments it does distract from the game waiting to play again. By the end of it all I really did enjoy my time playing Just Cause 3 with the adventures of Rico and his really weird group of friends.