Guns Up! is a free to play title which is based around controlling waves of army troops when on the assault and structuring your base when on the defensive. This title is available to all Playstation users (4,3, Vita) and plays in a similar fashion to Clash of Clans or mobile games of the like. It's actually a fairly decent title once you get out in battle though after so many matches some of the microtransactions start to take place when your munitions (cash) starts to run low. The only way to gain extra coins is really through battle where you will need to take reward versus sending out troops. It's a neat balance and makes you really consider your purchases of troops in order to come out with a better deal. Layered on top of this is a gold system which can be used to buy things within the game like decorations for the troops or items like cards. In the game you get a fairly in-depth character and flag banner editor under decorations. In regards to the cards system these grant additional pre-game bonuses to use on the battle field to give your team an edge. If you're not setting up you're base, then you're either attacking someone else online or taking part in defense scenarios. This is largely the sum of the game as there isn't exactly a ton going on.

One aspect that should definitely be known when playing Guns Up! is that the game largely runs itself. Whether that's playing on offense or defense you just watch the action while deploying troops and using power-ups. There's a wide variety of troops present with more to unlock of rent if you'd like for battle. These are deployed through your munitions so be careful as not to burn through your rewards for the match. When it comes to the card power-ups many are used during the match whereas some are just match bonuses like rapid fire or more unit health. The ones in-game typically come in the form of bombs, tear gas to stun enemies or rally points to gather the troops. These do have quite the effect in certain situations though I still felt like I was just watching a battle unfold. Guns Up! carries a cartoon style of gameplay to it which I actually did quite enjoy and the surprising amount of gore. This appears mostly during troop confrontations which are actually quite exciting to watch as they fire away at each other or get blown up. The controls for everything were really simple whether that by moving buildings around in your base or providing support for your attacking troops. Almost everything can be upgraded in the game from building to troops using munitions or valor points with both being earned through combat. 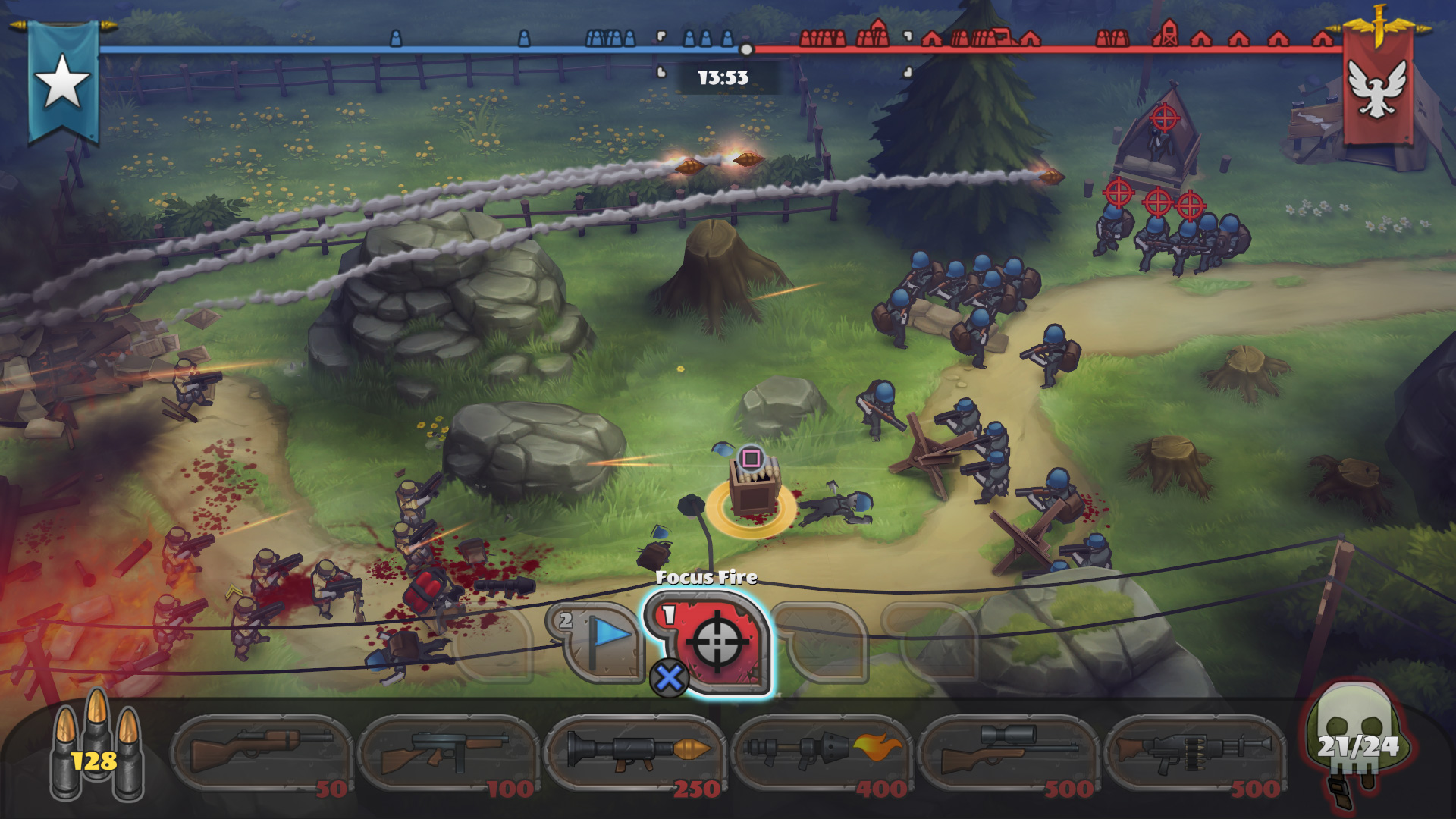 The game a decent title though there honestly wasn't much to it aside from building some defense structures or attacking some randomly selected foes from a list. The gold system microtransactions actually seemed fair enough from a comparison of the gold to what you could get so that was alright. Just really didn't see that the game really offered that much aside from a few quick matches. After that I would get bored and just go play something else instead, for those looking at grabbing another free game this works fine. It just really doesn't do anything different or even much at all while feeling very similar to mobile games of this genre. Still, it does provide a decent time killer if played in short bursts as you will certainly feel a strain on your munitions unless your strategy is flawless.

Guns Up! for Playstation 4