"Episode 1: The Order of the Stone"

Telltale Games has attempted to do something that no one really would have predicted before its announcement and that's adding story elements to Minecraft. While the game of Minecraft is filled with things to do, creatures to take on basically the ability to build anything there really isn't any sort of lore to the game. This has always been fine, so it was crazy to finally try the game that attempts to build a story around this universe. The first episode of this five part series introduces us to the team that we will be playing with across the episodes and each have quite the personality. What's even neater about this title is that there are some larger choices than in past Telltale games as you can pick a male or female lead along with a number of minor variations as an example. I went back to play a bit of the episode again to see both perspectives though I do prefer the male voicing on this one, just fit the narrative better for me and I felt the voice actor was more in it. If you're unfamiliar with the series of these games they're largely story focused as a cinematic movie with small amounts of gameplay and this one actually had the least gameplay I've seen in a title like this so that was somewhat disappointing. I did really enjoy the cast they've set up for the game and the team presented as it continued to grow over the episode. It was also great to see a mystic quest being the overall arch of the series and that it was incredibly faithful to Minecraft. Furthermore this first episode was a tad slow to get things going, but it did need to establish these characters so I give it a pass in that regard.

Everything looks and plays in exact detail to what their Minecraft counterparts would be like. It was so great seeing the many Minecraft creatures they were able to stuff into this first episode and fans of regular Minecraft will love that. There was even a great amount of story detail that was starting to be built up and created a sense of lore for Minecraft. The voice acting was well done with every character feeling absolutely unique. The game does look more akin to animated Minecraft videos which I'm sure many of you have seen before which was fine. Combat within the game was rather stiff, there were also many background flashes which were definitely buggy portions as it the Telltale way (the badly need a new engine). Finally would like to mention that the game has some neat side crafting areas where you can decide what to build in order to complete a task.

While some may complain about how this was a quieter episode than they're used to I felt that the story was being developed well considering they had to create it from scratch. I also liked the characters and the world of Minecraft they have begun to paint in this first episode. It is also a very friendly title for all ages filled with minor heroic moments, olden lore and some great comedic points. The pig on the cover is indeed a character, mostly there for comic relief and I'd discuss that more though want to keep things spoiler free. I also found that with this title the choices will branch out much further than ever before as I can already see the various branches of decisions forming. If you like Minecraft or maybe looking for an epic story, than this is a good start for both of those things. 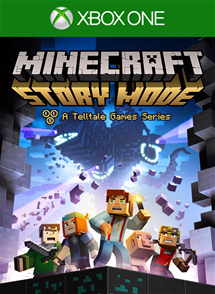