Orbit is another one of those odd local multiplayer only titles which pits up to four players against each other. I again, find it odd that games exist local only without at least adding the option for AI players. With everything becoming more and more connected with the online space it's strange that titles like this exist. Orbit itself is rather confusing from the start, I've played many games over the years and I find this one really hard to get into. I personally spent a good fifteen minutes getting adjusted to the settings and still didn't some gametypes. This lead me to bringing in another individual that doesn't quite play games that much to get their take and after a half hour they didn't seem to really understand what was going on. Don't get me wrong, it can be fun with four players that have a good idea of what they're doing though that scenario rarely exists these days. Within the game there are only a couple modes and a few options to tweak them. You have tournament and then mayhem though the latter mode is just a mini game before the tournament. This includes things like a tennis mode though it's quick and never more than a few seconds long. From there you move onto the tournament which can be customized in length to make it last a few matches. When playing more than a single match everyone chooses new power-ups for the next match which was a nice touch. There's a couple modes available within the tournament including destroy; annihilate, conquer and survive. These modes are a toss-up ranging from deathmatch to dodging asteroids of holding hill positions. There's also a forge area which I thought might be a neat level customizer, but it really just lets you tweak the design of the orbit systems.

If you're asking what an orbit system is, it's the design of level in regards to gravity. All the arenas are of similar space and really lack any sort of unique colors or design to them. Though it's neat how in these arenas that gravity is present and has variation depending on celestial bodies that are orbiting them. This directly impacts gameplay since your shots and ships can get locked into orbit. Gravity was one of my top reasons of death as I got drawn into planets or my ship would explode while trying to escape it. Aside from revolving around gravity the game focuses heavily on ship energy which is used when boosting, moving or even shooting. When it overheats your craft will explode which is certainly never a good thing. The visuals of the menus are neat though the game itself really doesn't look too special. 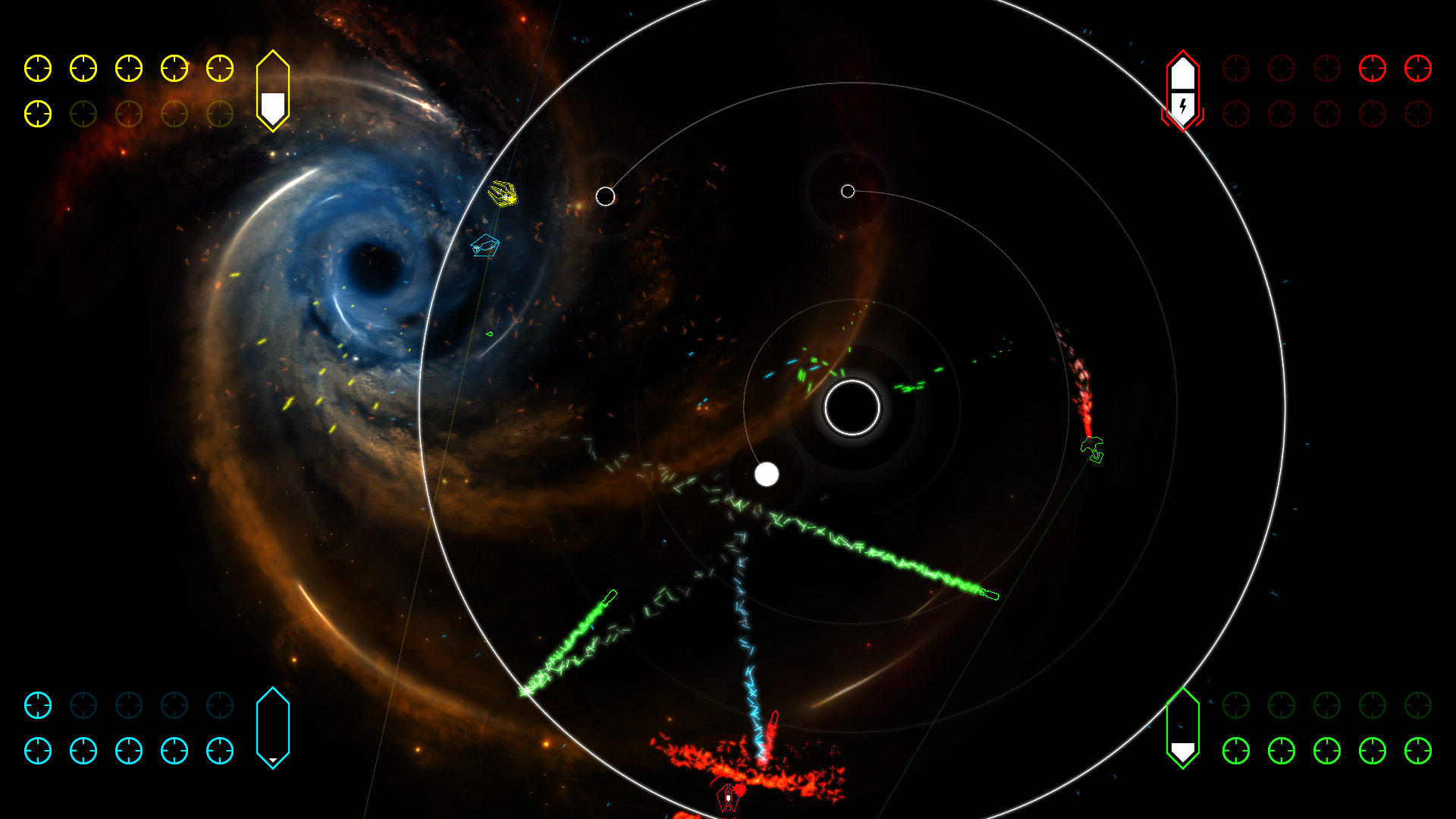 If you have people to play with locally then this title would be alright. There's really nothing to the game at all or anything special that makes it stand out aside from the gravity. It's also quite difficult and confusing to get into the game itself. Felt they could have made it more simplistic to at least have that aspect going for it. The levels are rather bland though I did find the use of gravity intriguing, just wasn't used for the right type of game I felt. Trying my best to enjoy all the games I played I really didn't get too excited about any particular aspects of this game it's just another one of those local only titles where occasions to play them don't come up often enough.