"I am One with the Wind and Tiles"

Disney Frozen Free Fall: Snowball Fight by Supervillan Studios brings Elsa and the gang back into your living room in this free to play tile matching game. Boasting 285 levels, plus a local multiplayer mode. This title promises a fun experience with all the characters from the movie. Except for the weaselly merchant, I’ll leave that one up to interpretation. Beginning much like the movie it is based on, the first level is at the ice lake where I was joined by my companion, young Kristoff. Much like his role in the movie, he does not do a whole lot other than stand there and wave. The first few levels are treated as a tutorial matching three tiles removes them, matching four makes one tile a power up capable of clearing an entire row of tiles and matching five gives an iceberg power up capable of smashing tiles in all directions.

Progressing through the levels led me closer to the Kingdom of Arendelle. Soon I was gaining valuable tools like the ice pick, which smashes a selected tile, and the snowball, which grants extra turns. I was also gaining new companions such as young Anna, whose torch melts tiles away, and her sister young Elsa who smashes multiple tiles with her ice powers. The free falls that happen near the end of a round are very satisfying. Often bordering on chaotic, watching the tiles break away as the score furiously mounts. While many of the levels are limited by the number of turns allowed, there are timed levels also. This is where I first encountered a difficulty in clearing the level. Now I had two choices, use an hourglass power up to continue playing, or give up and lose a life. Tough choice considering running either one down to zero can lead to the “Shop” where there are micro transactions aplenty. Some are less than a dollar, but certain purchases rival full release titles. All characters may be unlocked as micro transactions, or can be earned with progression in the single player game. Unlocked characters are available as multiplayer avatars. Each character has their own favorite tile that powers up their snowball meter. Once enough of their favorite tiles have been matched, they will lob a snowball from their snow fort at their opponent. Snowballs can be dodged buy clearing enough tiles before the snowball gets thrown. The local multiplayer offers an often frenetic experience as the characters lob snowballs at each other in a best two out of three contest. Truly a great vehicle for bragging rights or to pass on the occasional chore.

To point out the obvious, the game looks great, because it has to. The characters look exactly as they do in the films. The backgrounds and game boards are as clean as one would expect from Disney. The music is a looping adventure style piece that fits the period of Frozen cannon without delving into the licensed music of the property. The ceiling on the micro transactions hurt this title. I prefer to let patience persevere as there are better gaming experiences available for the cost of some of these purchases. 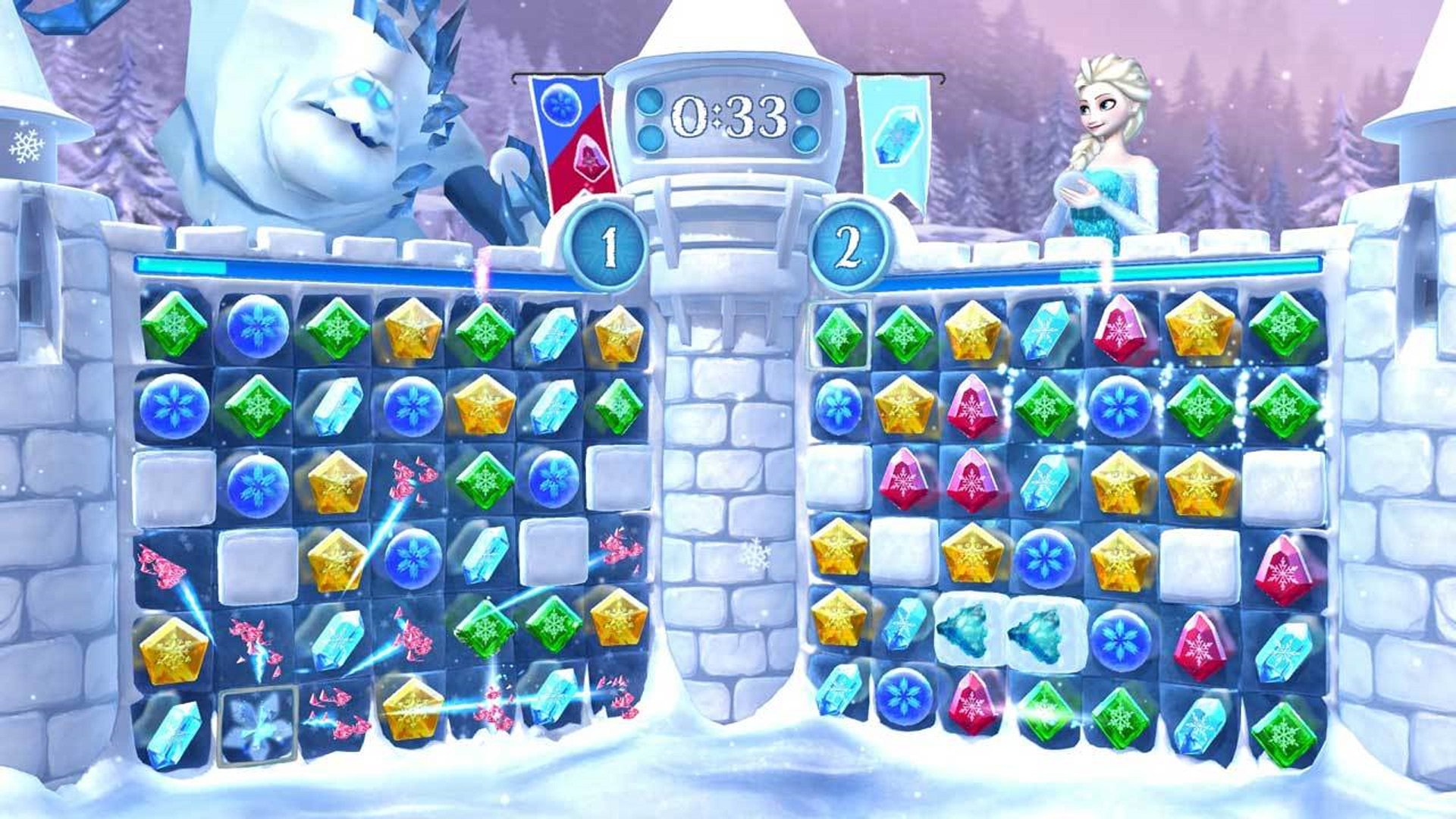 This is a fun experience for fans of the movie for minimal to no cost. The visuals are perfect. The interface is easily picked up. Much like mobile versions, this is a great to pass the time. While I understand free to plays rely on micro transactions, this title gets rather bold with the costs. The multiplayer aspect adds to the experience as it makes it a way for family and friends to appreciate the movie from an unexpected and enjoyable front.

Frozen Free Fall: Snowball Fight—Xbox One Review Rating: 6.5 out of 10
Comments by Disqus