"They Gonna Call You"

Extreme Exorcism is an arcade type shooter where players are tasked with clearing ghosts from a ten room haunted mansion. Up to four players can battle the ghosts simultaneously as the action gets more frantic with each ghost slain. The action begins with vanquishing a demonic chair. Once defeated, the next level begins with a crown ghost taking the same route that the vanquishing player took in defeating the chair. Subsequent rounds add more ghosts, with the crown ghost acting as the last vanquisher, while the other ghosts behave the way that the players did in the previous rounds. Keeping in mind that the ghosts use the same weapons as the player and can kill the player with their own tactics. The round ends with the crown ghost being defeated. Players can continue through the mansion gaining new weapons, and unlocking new areas. There are also single player Challenge modes where certain criteria have to be met to complete the level. There are five tiers of ten challenges each adding a different experience from the main game. What I liked was that not all of the challenges in a tier needed to be completed in order to unlock the next tier. So if a challenge was proving too difficult, it did not impede advancing to the next tier. For example, only six challenges are required in tier one in order to open tier two. While it was not a simple task I liked that there was that leeway in how I decided to address the challenges. There is also a four player Deathmatch mode pitting the players against each other in any room in the mansion. There is a preset mode to Deathmatch, but every aspect of the match is customizable. Players can determine round length, weapon pick ups, ghost behavior, movement restrictions (or lack of), and game speed. Round winners get a ghost to aid them in defeating the other players just like in the main story mode. Deathmatch can be as frantic as it is fun while dodging other players and their ghosts in order to win the round.

Extreme Exorcism has an old school coin op feel to it as each level takes place on a single screen. The levels consist of static and moving platforms that can take on several attributes. Some are extra bouncy, while others can aid or restrict movement. There are environmental elements like blowing winds that can turn the tide on a level. There are numerous weapon pickups to be unlocked along the way. Players may carry up to three weapons at a time and they all fire simultaneously. Tact an care must be taken though, as the ghosts will be firing just as much as they mimic you in the next round. The game is frantic and the music adds to the fast pace of the game. The standout is the triumphant synth fanfare after completing a level. The requisites for the Challenges are refreshing as it is not a hard slog through all the levels in a tier in order to advance. This made the Challenges fun, instead of seeming like a punishing chore. Deathmatch can present hours of extra gameplay simply from the amount of tweaks that are allowed by the players. Players can choose to only have to watch out for themselves, or turn it into a full blown deathtrap. 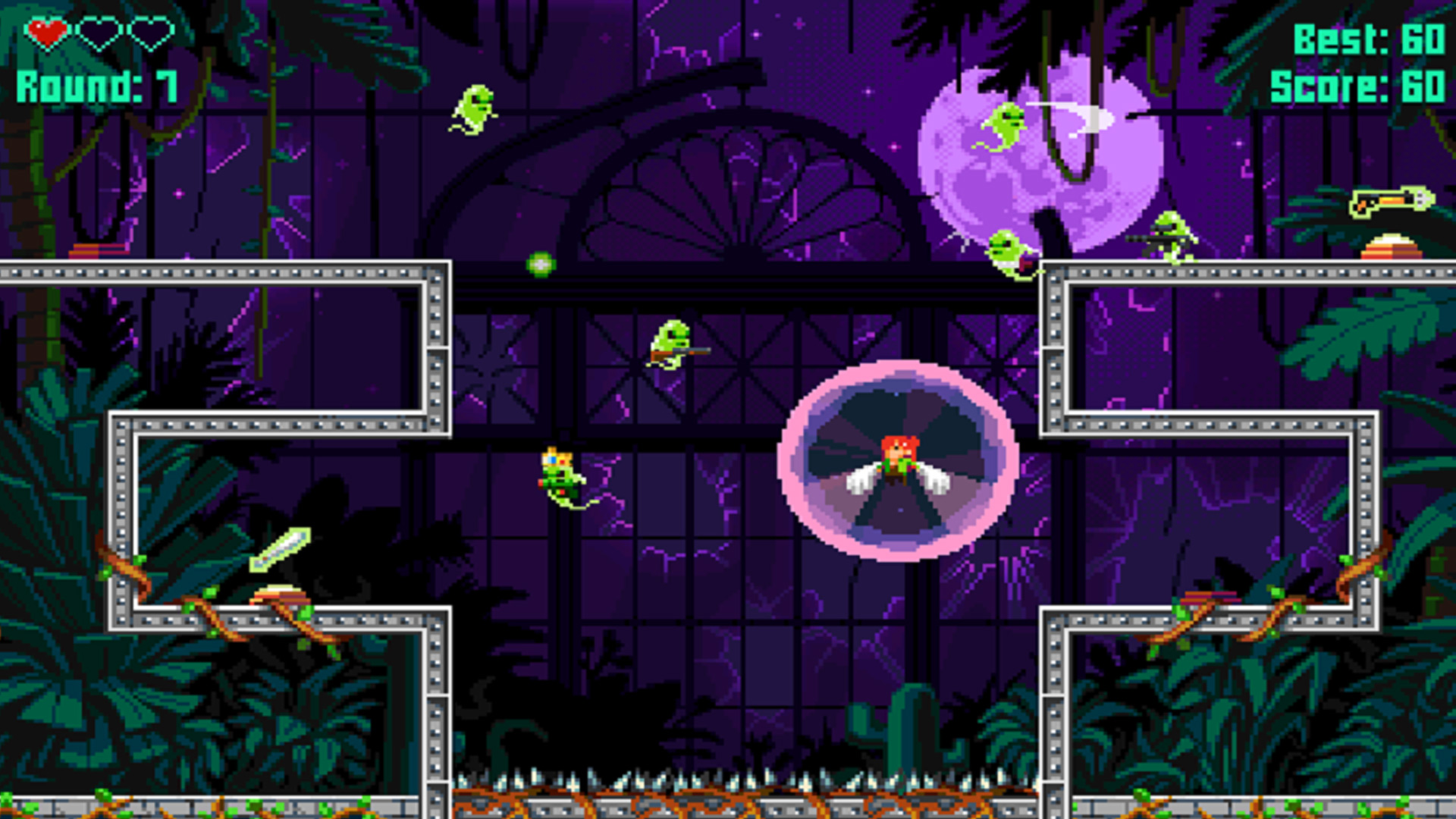 Extreme Exorcism brings old school arcade style into the living room. The same screen co-op is reminiscent of titles like Joust. Extreme Exorcism can be enjoyed alone, but the real fun is when more players are added into the mix simply because the ghosts act as the last crown ghost slayer. More players just add an unexpected nature to the ghost behavior. The more relaxed prerequisites on the Challenges are a welcome deviation, allowing more freedom to the player. Deathmatch was done very well, as there are AAA titles without as much customization as Extreme Exorcism. “Too Fast” game speed is recommended at least once. Invite your friends over because Extreme Exorcism offers a fun co-op experience.