Yasai Ninja is about a dishonored ronin who was a samurai for the Shogun that teams up with a convicted criminal to conspire to assassinate the evil Shogun. And they are all vegetables. Nobu, the stoic ronin, is an onion bent on vengeance and regaining his honor. The other hero, Broccoli Joe, is a Jim Kelly rip-off in Bruce Lee pants that is bent on setting the Civil Rights Movement back forty years. This title is so broken, I hardly know where to start. This is a 3D platformer that flows about as well as my constipated uncle watching Deliverance while eating a double cheese pizza. I was often forced to make a jump, stop, set myself in position to make the next jump just so I would not fall into a hazard. The squirrelly camera does not help lining jumps up either as quite often it has mind of its own. Which is no better in combat. Often in attempts to be cinematic, (and I am being so generous here!) I was panned behind a wall where I could not see jack squat. Not that combat is all that great. There is a bad frame drop as soon as fights start and strikes are slow and clunky. Often I would just hold the block button and let the AI do all the dirty work, then just revive him if he went down. I had to adopt this technique because I have played survival horror games that are more generous with the health regens than this title. There are really no combos to speak of until about the fourth chapter, which honestly took me hours to get to because... This title has no time for checkpoints. They are so few and far between often I would be fighting for ten to fifteen minutes only to blow one carefully lined up platform and be sent back to the last cutscene with all that work for nothing. Quitting a level mid-chapter carries even worse consequences. Whereupon the next time I launched the title, I was sent all the way to the beginning of the chapter! Hence the many hours sunk into this title with little to show for it.

Right off the bat I noticed a lack of voice acting for story driven title. The music was probably recorded in a Tokyo elevator. The backgrounds seem to be going for a sumi e style, but ends up looking like ugly cell shading, the only place that I saw a true sumi e style was in chapter two when there was a cool side scrolling platforming section. This visual was quickly ruined once the stuttered platforming reared its ugly head. My only reward from this game was when I finally finished a chapter. “Achievement Unlocked, You Beated (chapter name). It is unbelievable how little QA went into this title. 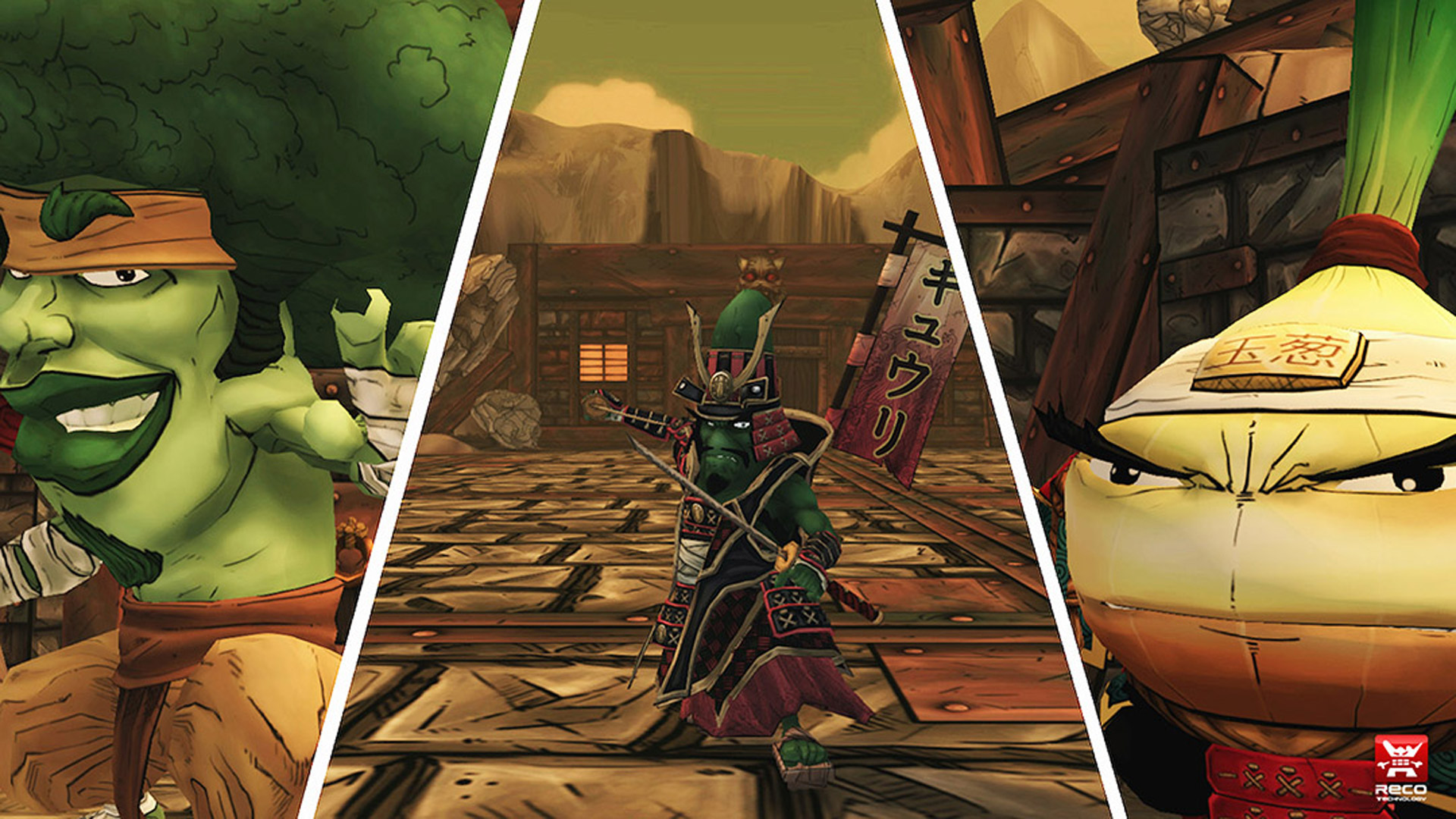 Aiming a title towards children starring vegetables seems like a good idea. There is a successful Christian story series starring vegetables, but it’s stars are the basis of ketchup, and a veggie so bland, it is practically a watermelon rind. Yasai Ninja stars the two vegetables that kids hate the most. One makes your eyes water, the other makes you regular. So, if you enjoy weeping on the toilet this title may be for you. I would make my kids play this as a punishment for scratching the car. I would make my kids play this so they would get interested in books. Detainees in Gitmo should be granted a full pardon upon completing this title. Pros: I found that am still really good at swearing, and this title really pushed me to get creative. Cons: I now prepare vegetables with extreme prejudice.