I've always taken a look at Disney Infinity though I had never really played the game until E3 this year. Since then I was able to check out 2.0 and then this one for launch. I can definitely say right from the first impressions of this title that it's a much more complete toybox experience than ever before. This review is based on the starter pack bundle which included the base game of the toybox world and the Twilight of the Republic playset based on the Clone Wars. Though for that part of the package I'll go over below briefly, with this title there was a definite core aspect which is the toybox. This is essentially a portal area to the entire game which has a number of worlds generated by talking to the various hosts. By learning their areas new worlds open up and so do the activities present to you. I'm going to try and generally break down the various areas along with what they offer.

The first area would be combat which opens up a Jack Skeleton area and allows you to take part in survival challenges. Sidekicks are the next area where you learn about these helpful for hire allies and that you can take part in games to get food which when fed levels these small characters up. They also are able to be dressed to a certain extent and given a weapon to assist in combat scenarios. The main strip is the third area which leads to the empty Disney castle and has a number of shops set up along the way. These stores include a download section to find user created maps, a store to purchase new toys for customization and an area to participate in multiplayer. This place is an arcade where you matchmake with others around the world for competitive games though I ran into a couple crashes and a poor system of finding people since it was really rare to get a match together. The fourth space was the racing section which had a world environment from Tatooine in Star Wars. This is the place to learn about driving and then partake in some racing mechanics. Coming in at fifth is the parkour area where you learn to move around and even take on the Ewok village challenge which was grand. Finally there's the design section with house customization. This building place allows freedom of creativity as you edit your own house by adding rooms and filling them with purchased items. These areas all branch out further from the general description and there's so much to possibly do here. 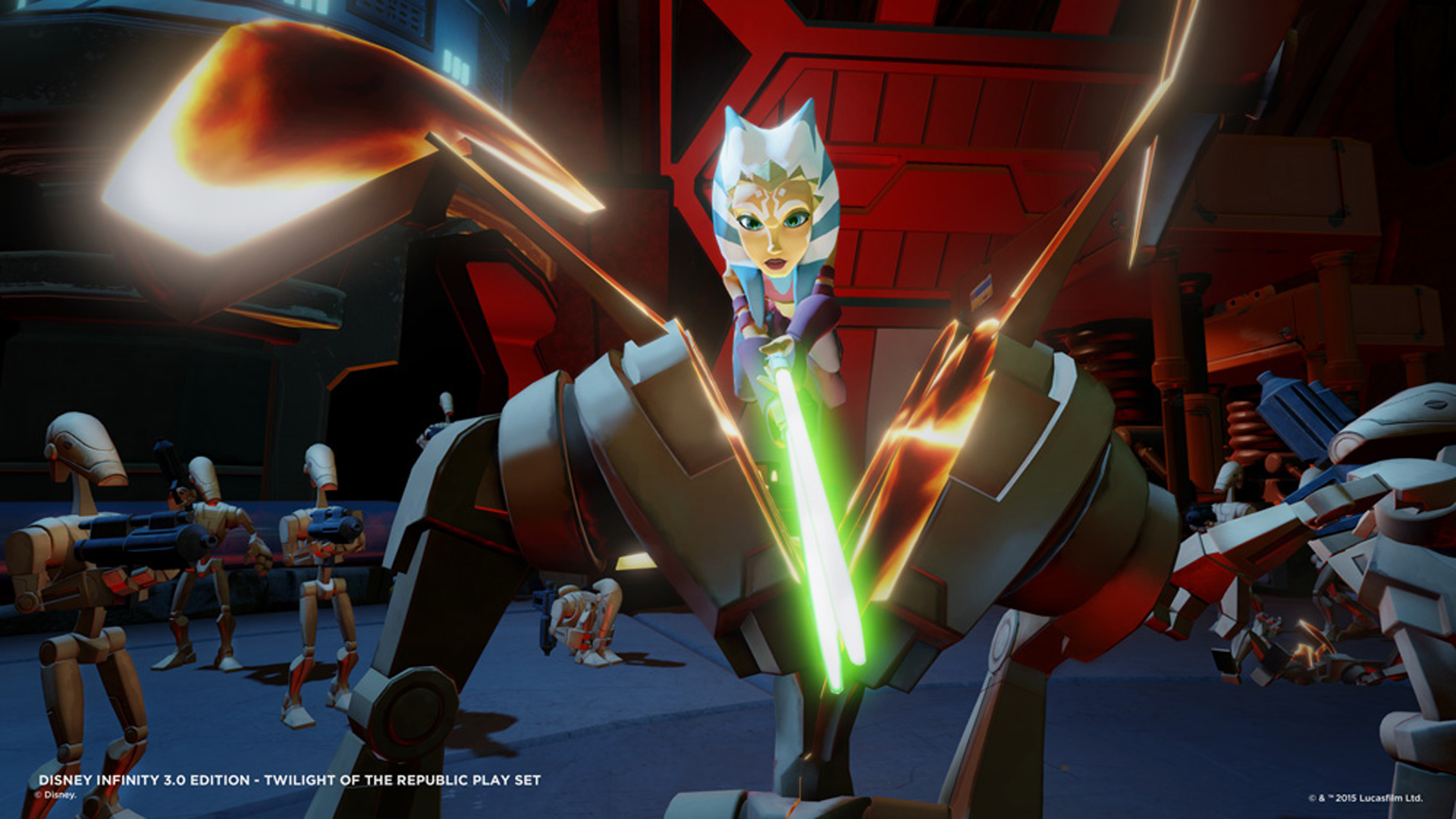 This aspect has always been alright for Disney Infinity with characters moving well and looking exactly like their toy counterparts. With this third iteration featuring the Star Wars characters they've done a great job of capturing the characters, especially with Ahsoka that looks exactly like her Clone Wars counterpart. Movement is well done for all the toys and the lightsaber work was perfectly captured. I did have some issues with the parkour system which could use some more flow to it as I'd just hop off flat edges that got annoying. When leveling these characters through play you also get a number of extra abilities in the skill trees and some of those later jedi skill combos were quite a spectacle. Aside from playing as characters there are also vehicles portions which range greatly from flying starships or driving across the terrains within the world. The toys also have a couple vehicle like pick-ups such as a hoverboard or jetpack that can help you get around. The game can also be played in local cooperative with multiplayer figures which splits the screen in half or online with up to four.

Twilight of the Republic Playset

I'm placing this as a part of the review since it gives a taste of the playset expansions yet to release across the year and is standard within the starter pack. With this playset you get taken into what is a mini story within the Clone Wars series where a core four work together to take on the threat of the sith. This includes taking on General Grevious and even the returning Darth Maul. This will be great for fans that miss the animated series and felt it was just left without conclusion. This is a chain of missions chaining a story filled with action, great side stories and a bunch of characters that we haven't seen in the longest time. It brought us across the best prequel planets and was actually a well developer side tale for use to explore. The core part of the story aside from doing any side quests was a few hours in length and I found that to be rather decent. 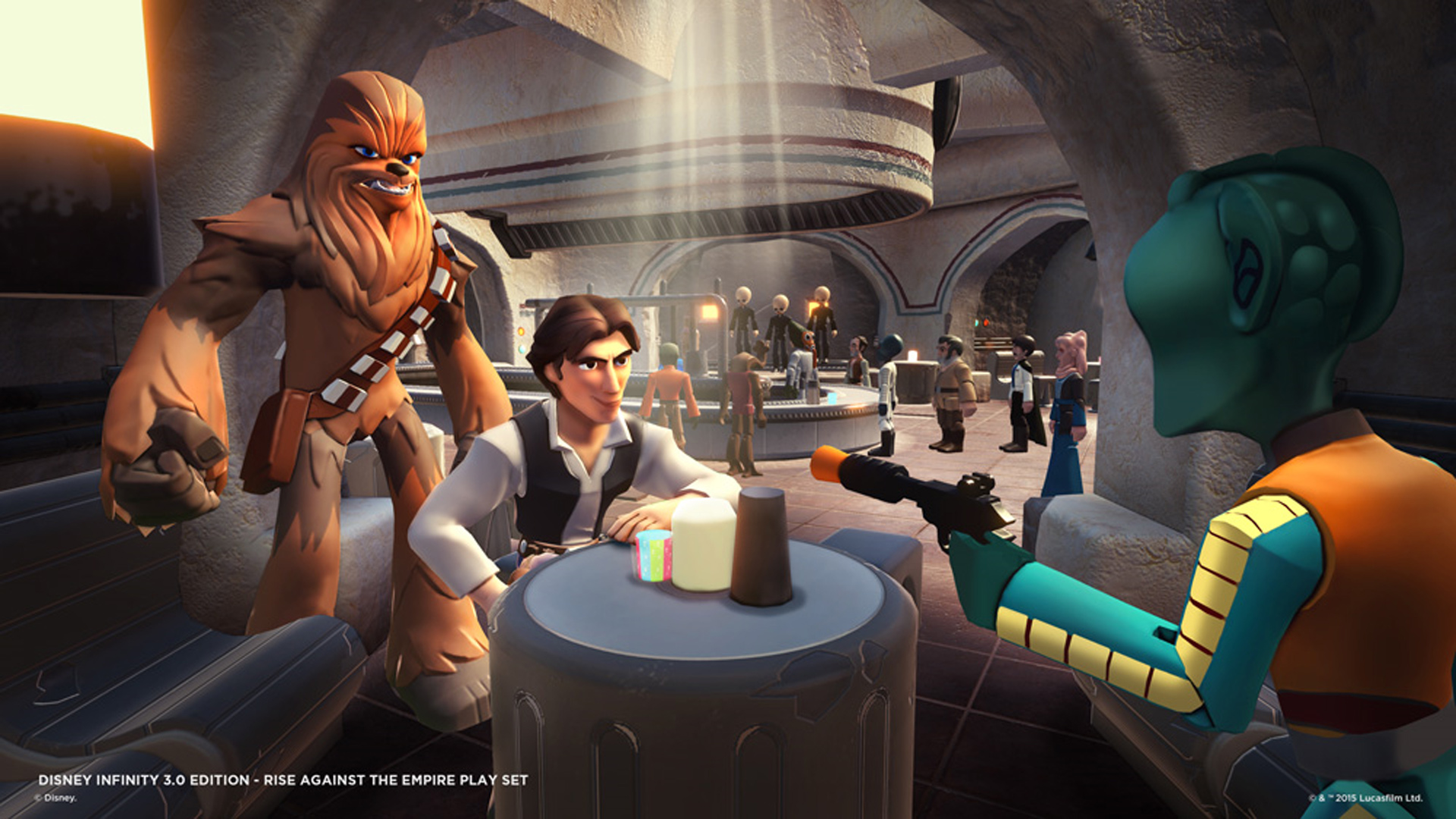 After playing the second Disney Infinity title I could clearly see that this was the initial vision from the start as it's a much deeper collection than the previous entry. The menus are also deep, yet smooth to move through and everything within the game itself is easy to understand. Younger individuals will have the largest thrill from this collection seeing their toys come to life as they fly around in ships or hop around wielding lightsabers. The world looks great all around you with each character being generally special. The depth of customization for creating entire maps to play on or even your own house area it great. It's hard to cover just how much content is actually available in this package and there's always something new to do with extra playsets released through the year and even user generated content. The number of items you can purchase is massive and spans a massive library of franchises. The most magical component within Infinity is the connection of all these universes coming together for one cohesive environment. After it all my biggest worry heading in was how the Star Wars content would be and it was probably the best game based on that franchise for awhile.