When I think of toy cars, I think of the die cast cars of my younger years trying to create the best tracks and ramps for racing and launching them off of. Until the axles bent and I would take them into the backyard and give them the proper burial of smashing them with a hammer. But I digress. Super Toy Cars is a neat little cart type racing game that offers a career mode and quick race. Career mode boasts eight chapters of increasing difficulty consisting of six races per chapter. There is the straight up Race against seven bots, Time Attack challenges, Fastest Lap and Elimination where the slowest racer is eliminated every fifteen seconds. Lastly is the controversial Evade, which is an Elimination race where power ups are removed, and the track is littered with landmines. Career mode gives points for completing races, and bonuses like special paint jobs for placing in the top three. Points are spent on buying new cars, or upgrading the ones currently owned. Special paint jobs range from 1960’s inspired, to my favorite, a riveted together post apocalyptic skin. Quick race offers fifteen race tracks with three difficulty settings for each track. This mode offers all sixteen cars for play which lets you try out any car you may be thinking about buying in career mode. There are many different colors to choose from, plus any special finishes that were unlocked during career mode are also available. This mode also allows for up to four player local multiplayer. This makes it a great couch game for friends and family. Except where I noted before, power ups are available in both modes. These can be offensive like homing missiles and mines, obstacles like spring boards and a giant 8-Ball, or a boost refill allowing you to snag victory at the last moment. The tracks themselves are made of items that would be found around the house. There are tracks made up of grocery and food items, a garage themed track, a somewhat familiar candy themed track. The soundtrack is full of catchy, punky songs.

With fifteen tracks and three difficulty levels, there is already a lot of game play just in the quick race mode. This is compounded by the different modes in career mode. The sixteen cars cater to just about every taste. There are Hippie-mobiles, rugged off roaders, hot rods, sports cars and high performance cars. Playing local head to head was a fun and competitive experience. While the soundtrack is good, it can get repetitive during a long gaming session. 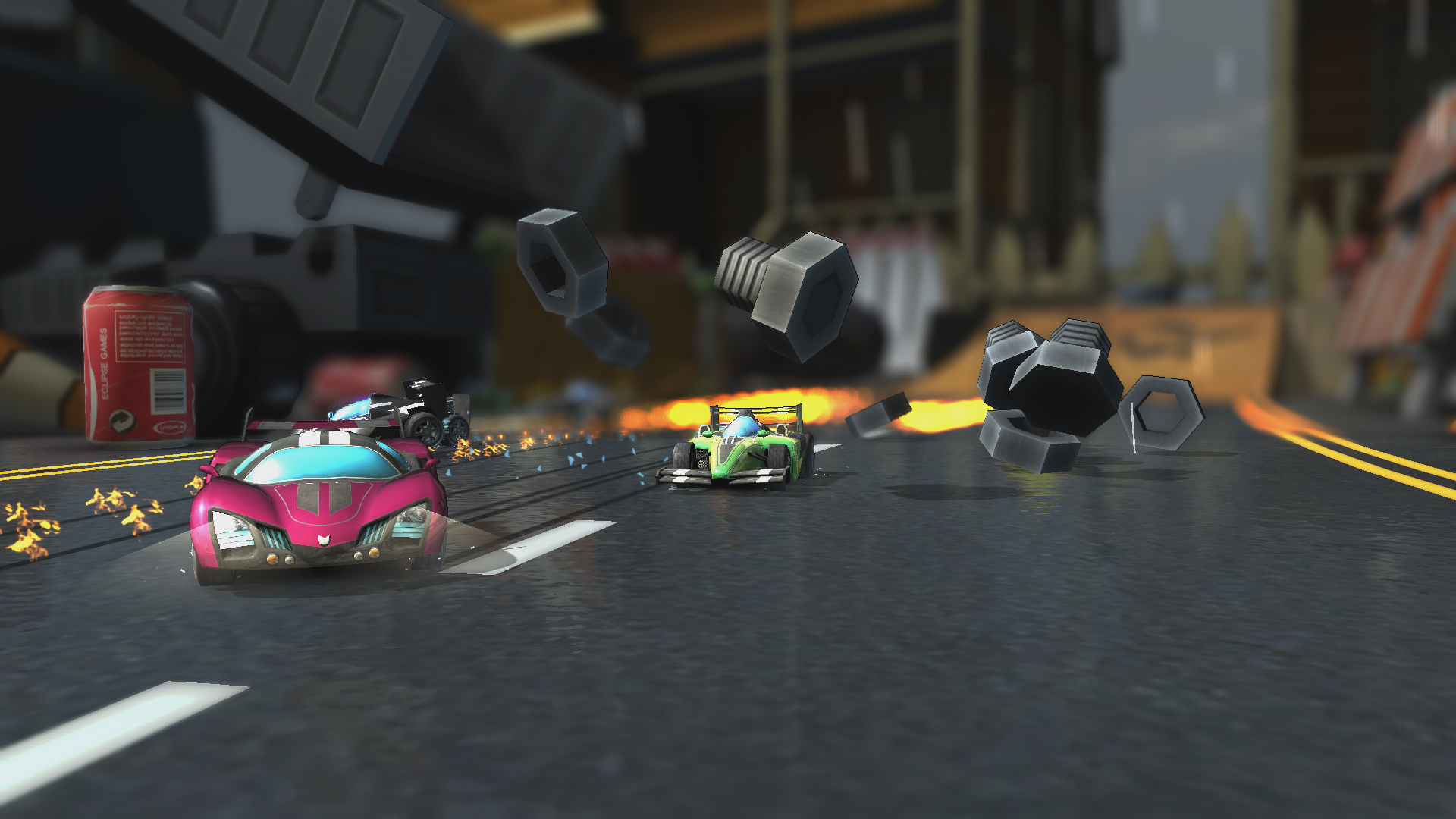 Super Toy Cars might seem on the outside to be a kiddie game. The stout design of the cars looks more like the preschool types instead of the die cast ones. Truly, this game can be enjoyed by all ages. The game plays smoothly and looks clean. The amount of tracks and broad selection of cars ups the replay value of Super Toy Cars. While the four player multiplayer makes for some great friendly competition in the living room, online multiplayer is oddly missing from this title. The soundtrack has actual songs instead of a cheesy repetitive throwback theme. While it does not break new ground, Super Toy Cars does carting well.