Disaster has struck the islands of Camatuga and all the bridges of the islands have been destroyed. Bridges must be rebuilt on the island with enough integrity to restore commerce throughout the archipelagoes of Camatuga. Bridges must be built within a preset budget from the resources of wood, steel, concrete, and cables. What I realized by the my first bridge was that I was totally on my own on how to construct bridges. The only tutorial was how to select materials, how to remove elements, and how to test the strength of my bridge. The “Help” button merely goes to a button map of the controller, which does not offer much help at all. The display was sized a bit too large and half of my budget display was out of view. Also, the menu seemed squeezed in the edges of the screen. I would have to resize my default display in order to rectify this as there were no in-game settings. My first impression was the silence, the game seemed to lack any score whatsoever.

After building my first few bridges in silence I decided to reset the game. That is when I noticed the music icon hiding in the lower right corner. I had missed this before because of the screen size issues. The soundtrack fits the game well. The controls were unintuitive as the X and B buttons should have been swapped for removing elements, and opening the menu. Unguided, I failed at my first few attempts to bridge the gap I had been given. When I finally built a successful bridge from my knowledge of what bridges look like, I received the “Smart Aleck” achievement for not building to specification even though no specifications were given. I did not know whether to feel congratulated or insulted. In the Xbox One edition the game comes with the add-on “Slope Mania.” This is similar to the core game of building bridges. The “Slope” part comes from point A and B being at different height, and therefore the bridge slopes. The “Mania” part comes from me wanting to pull my hair out. Once again, there is no tutorial offered on this game mode. I found it to be a frustrating exercise in patience.

The look of Bridge Constructor is clean. The backgrounds are free from distracting elements, and the water elements look sharp. The soundtrack fits the pace of the game. The controls do take some getting used to. A feature to select sections of the bridge to delete would have been nice also, instead of removing them piece by piece, or scrapping the whole bridge altogether. The game would have benefited from an optional tutorial, and a proper Help menu. 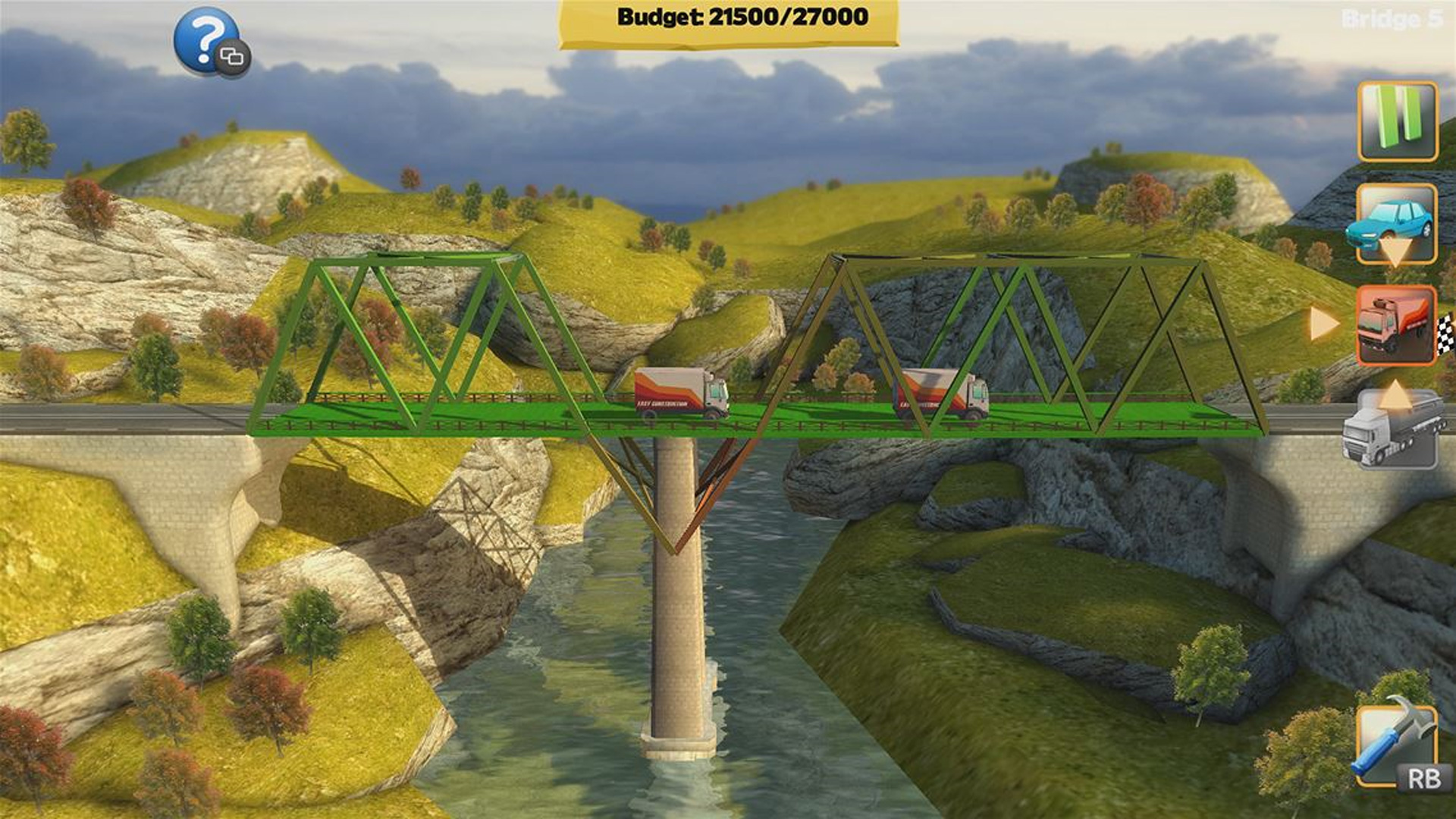 Bridge Constructor, at 9.99 USD can be a fun experiment on how gravity and pressure act on different materials. The use of different elements and geometry can make or break your career as a bridge builder. Although it does not push the boundaries of Xbox One, Bridge Constructor is a clean looking game, with many different areas to build in among the islands. The addition of Slope Mania is a nice gesture, although it is a more difficult version of the core game. Aspire to build a super bridge with engineering brilliance, or fail miserably while utilizing a smash toy cars in the backyard with a hammer mentality. You just will not get too far in the game that way.