Ever since Geometry Wars released on the last generation I've had quite the enjoyment of the twin stick shooter gameplay genre. With Tachyon I was most impressed by their attempt to not just release a regular twin stick title with variations on survival, but an actual campaign. The whole point behind playing as the mini shooting character on screen is that you're actually a program designed for hacking. The individuals that created and unleashed you onto the servers are attacked and it's up to you to discover what happened as a sentient AI. While the story wasn't particularly strong and fairly cliché I liked the thought behind it and that there was more depth than just shooting the various on-screen enemies. Every wave you face is a level of the hack in progress with ever growing enemies and continuous new ones. That was another surprising aspect for me was that new enemies were constantly being introduced across the ten levels and even in the finale as well. I did find gameplay began to become a bit overwhelming in the later levels and some bosses to be incredibly annoying like a scissor one and a simplistic laser boss. After all that I did find the last level to be almost lacklustre compared to the few before since I found it rather simple. As you progress through the levels you also unlock a variety of weapons and bonuses which make a huge different in combat, I'll talk about that more under gameplay. Finally after you're finished campaign or going for the high scores there's also side game modes like survival or timed modes.

It's your traditional twin stick game where you move with the left and shoot with the right though your selection of tools is greatly upgraded. Unlike other games of the type, Tachyon allows you to select an assortment of weapons from the standard gun to rockets or even a laser after beating the campaign. You also have access to two bonuses when starting a game and two bonus or side weapons. These are things like mines or bombs which will assist when in combat. When you get into the game your hub is well displayed with a simple objective meter that lets you know your progression on the particular wave. The character also doesn't have the usual health display which instead a time gauge, this changes over the course of waves constantly going down by getting hit or general time passing. It also does go up when you kill certain amounts of enemies and I found this system relatively hard to understand perfectly when in combat and waves are assaulting I'd rather have a usual so many lives system. That's just me, though the system in place was completely unique and it makes the survival modes intensely hard to get going. I also found the ship AI that you control to be slightly sluggish when moving though I'm unsure if that's a mechanic or not so I'll just mention it. 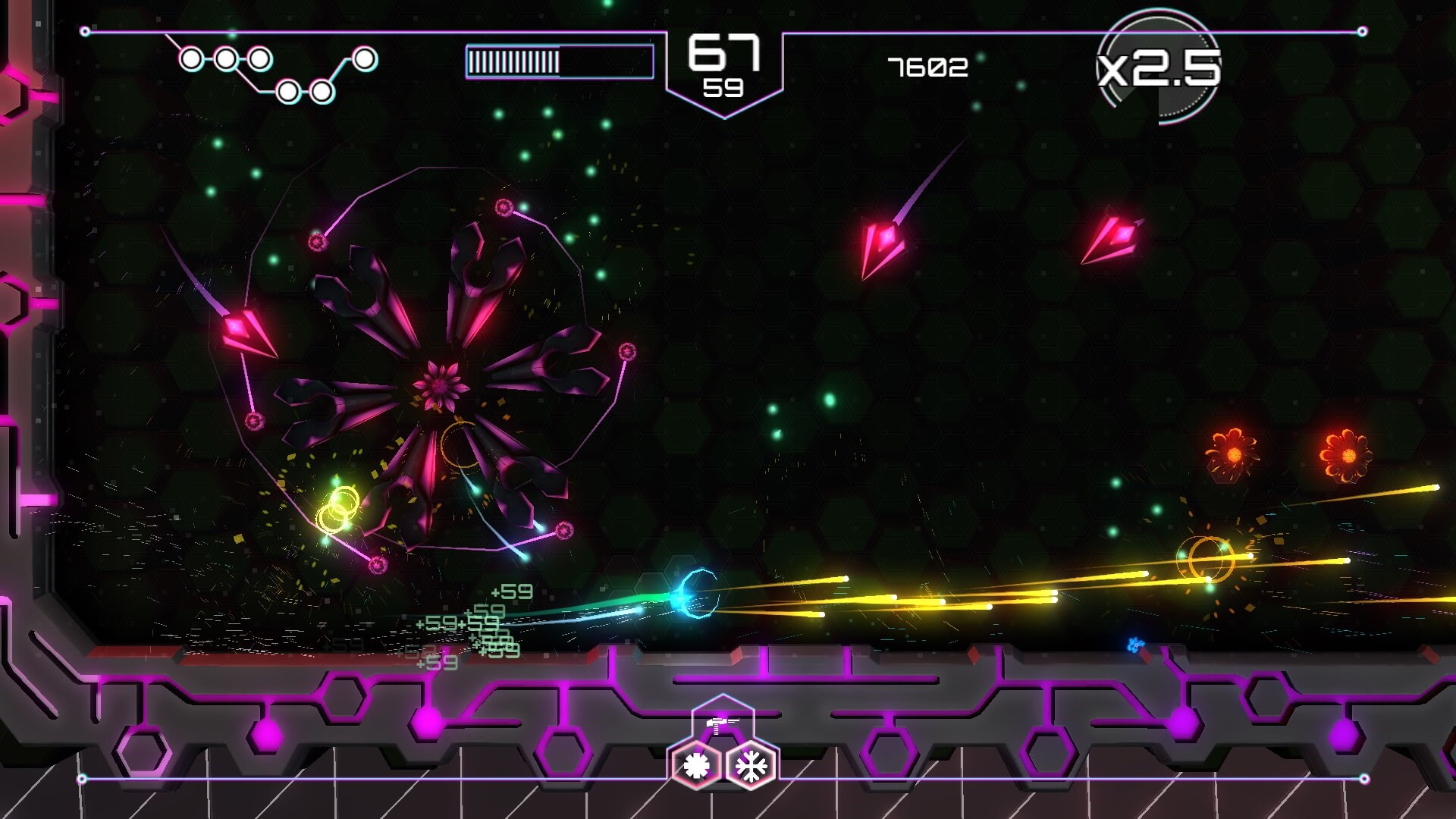 I really enjoyed this Tachyon Project and compare it to the best of the twin stick genre. It certainly brings more modes and a solid campaign which really surprised me. It's by no means a deep story though it's nice to see some further depth to a title of the sorts. There's also many options for making the ship more customized over time and this creates some mass mayhem. Things can get overwhelming at times with boss fights being rather difficult like the scissor boss particularly annoying me. Overall if you like the genre then this is probably the best I've played so far this generation.