I've been meaning to tackle this review for awhile and I honestly just haven't had the time until now. This is Evolve where you play as a cooperative group of four on an attempt to track a monster. It's a game of cat and mouse where that mouse can evolve into some creepy horror creature. This review covers the game before DLC to essentially the basic package of the game which in itself is lacking in content. Within the game you can either to a quick match of hunting or you can do a series event. The regular mode just has you battling the creature one off and then it switches people up between the games. Every aspect is human controlled so you have four hunters selected and one monster player. Within the level the monster has a head start while the hunters try to track and then kill it. The creature basically is attempting to eat the hostile local wild life in order to grow and gain new abilities to kill the hunters. In the other mode this is largely the same though it's changed into a best of series where the creature is essentially advancing towards the hunters and their base. Every round has a winner which adds new items for both sides to get an advantage for when the next round starts. I found this largely favored the monster with little chance for the hunters as the odds only got more stacked against them after rounds. From there that's really all the content available, no sort of formal campaign or really many side modes to play. It's a basic yet barren landscape of gameplay variation which gets repetitive quickly.

The world actually looks great and the variation between both hunters or the creatures is well done. There's not particularly too many of them in the cast between the four classes, but enough. The four classes present within the game are Assault, Medic, Support and Trapper which each bring their own flare into the battle. You can't stack classes so picking people that play certain roles properly is key to success. I was impressed with the worlds and there was decent variation between them. Though these are just a backdrops to an intricate game of hunting. Sure there's wild life or potentially dangerous other aspects, but it really comes down to the human connection in battle. Playing as the monster is well done with decent balancing in opposition to the hunters chasing you. Everything feels great when moving about with simplistic controls and objectives for you to win with. I wish there were more monsters available in the base package or at least unlocked from the start since the selection is small even with DLC you pay for after. 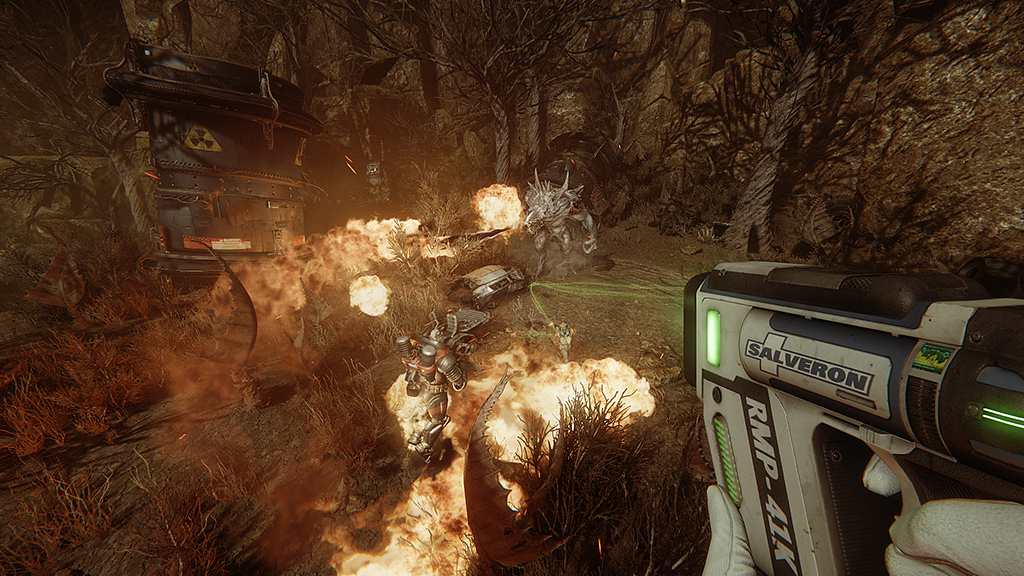 Evolve isn't exactly a perfect game though it does get the basics of its premise down perfectly. It's a great cooperative title where everyone must work together in order to suceed. It can also be a blast playing as a the hunted monster as you attempt your best to split up the group and pick them off while evolving slowly. The various environments you battle on were neat and each brought their own flare to the game. By the end of everything I really felt it was lacking in content and could have used some more aspects to it. If this had been a cheaper title the value would have been better though for a full price game with this little to it I'm quite disappointed. Still, a great game to play on the odd occasion if you feel like doing some hunting.

Evolve Review on Xbox One