Lara Croft and the Temple of Osiris Review

Lara Croft is back in another tomb raiding adventure taking place in Egypt as she and a group take on the evil dog like god creature Set. This is completed by collecting the various pieces of Osiris in an attempt to resurrect him so that the curse may be removed from the land and you can take on Set. This is handled across various tombs that you must traverse through that are littered with deadly traps and puzzles that require cooperation. I focus on the multiplayer aspect of the game as that was much more enjoyable then playing in single player. In the squad of four players you have two grappling explorers and two godlike characters which interact with magical items. There's some overlap on all the skills so you can do quests as a basic with any group, but it's far better to see all these characters working together in order to solve the various puzzles. Now the puzzles themselves were never too difficult, yet just awful when certain people you played with just didn't know what they were supposed to do. That always seemed to be around getting to higher places or hitting the beam focusing dials. Single players puzzles also work well as one would expect, just minus the extra players within the mix. The story itself brings you all around as you travel outwards from this central hub area where the pieces of Osiris are collected. The weather also changes with the progression through story so that was a neat effect as well. There's not only a bunch of interesting bosses to battle, but also many challenge tombs/areas to complete as well aside from that main story line.

Definitely the best part of playing together aside from completing puzzles as a group is the treasure collection. With gems flying about everywhere it's a blast chasing the gems down and beating everyone to them. Every tomb and puzzle has puzzles built for whatever number of players you have in the squad which was created solid gameplay. I absolutely hated that everytime another player joined the match we had to halt progress and go back to character selection. That's an old way of doing things and was annoying while I was tomb raiding. It's also weird that you can download others save progress before you start the match, just slightly odd that you could do that. Other than those issues it was fun playing with randoms online to take on the many dangerous enemies.

Done in an over the top viewing style akin to Diablo you move your character about within a set space. No one character can really move too far out of the viewpoint and this works effectively. The graphics were actually fantastic while also being well detailed. This is even better for me as I find Egypt fascinating so I'm well versed in it so the setting was great. The weather changing while progressing was also a nice touch which created a sense of passing time. The basic abilities and skills were handled well for characters which made each person serve a purpose all the time. You can also spice up your characters as well using those fought for gems to buy additional upgraded rings; amulets, clothing and guns. It's somewhat random though rarity goes up with the more expensive chest that you come across while playing.

You're going to get a good chunk of hours while playing the Temple of Osiris whether that be alone or online. Though I definitely suggest the latter as it's great to play with others. The story was interesting with a great setting that should keep people attentive. The variety of tombs and challenges also adds additional length to play as you await any future DLC within the season pass. I'm sure you'll enjoy this bridge between the older Lara Croft and the newer reboot version. 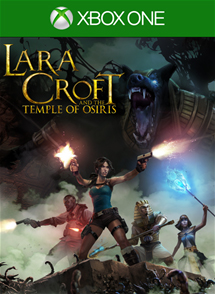