As in par with my many previous reviews for Telltale Games I will try my best to give an overview of the story without spoiling anything. The game overlaps with the main cannon TV story and provides with insight from multiple characters as we are granted perspectives directly related to or surrounding the Forrester house. What starts as a cheerful and joke filled beginning segment quickly turns dark and we can see that there are many figures at play here. Things are changing with the Forrester house being somewhat caught in the middle of this, it will take the entire family and close members to protect it. Playing as multiple characters you will do whatever you can to sway public opinion from the battlefield to the politics in play at the background. You can see how ruthless some of these characters are and death is always a swing away. I was almost all too startled by this first episode and intrigued to see a bit of background compared to straight up combat. While one character is out in the wild, another is making decisions from far behind the scenes. It's some great contrast and made the story feel far more intricate than usual Telltale titles. It'll be particularly difficult to come back in the next episode having to deal with what happened within this one and lines will definitely be crossed.

Done in the traditional cartoon style Telltale is known for we have a beautiful environment that feels very authentic to the Game of Thrones universe people love. Many characters from the show crossover to voice their characters and the same brutality from the show is here as well. I'm unsure if all the other adult scenes will carry over at this point from the show, but it's just a warm-up episode in that regard. I also felt that pace was a bit off on this one when switching characters, but I'm sure that'll all change.

I really enjoyed this take on Games of Thrones and this is definitely the proper way to display the series, aside from maybe an epic RPG. The story focus here is really important and I enjoyed seeing politics that can affect your other stories even if they're all talk far away. I can also see that becoming attached to any characters is a terrible idea as death is already apparent and all around us. It's an alright start for this series and I look forward to seeing how this goes across the sixth episodes that are in place for this season. Watch here for future coverage and episode reviews! 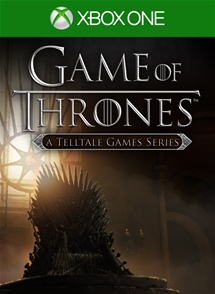