Split into a vast number of levels you're tasked with knocking out square blocks in order to progress using the power of these massive paddles. Played with Kinect only you can move your body side to side to change the peripheral view as you manoeuvre these paddles to smash the ball in particular directions. This works effectively for the majority of the time, though when it gets down to the smaller numbers of blocks I found it hard to precisely hit them. Working within this 3D space you can pull off some neat moves trying to get ones hidden behind objects, out in the open or those that need speciality hits. Multi-balls, massive balls and other upgrades appear in some levels allowing some massive destruction within the block area. Environments also vary between the regions available from the forest, to the desert or even space as you progress. Of course each of these spaces had their own theme to them and the shapes within would change to that. Had some neat mushrooms for the forest, palm trees in the desert and some neat temples as well.

As stated above you move through the 3D space attempting to knock out these poor cubes with many even having some scared looking faces. The spaces and orientation of these cubes changes constantly and there are some even more fun styled areas with duck hunting or strange shapes. The scoring system is based on time, completion and balls used to finish the said area. Everything is simple to control so anyone should be able to hop into the arena without difficulty. Sound can be repetitive at times, but it really isn't that awful to listen to as you're focusing on the balls moving around. The Kinect registers well even at some closer distances compared to other games as your upper body is the key focus in Boom Ball.

Younger individuals will love this game and the interaction you can have with the game. Even older individuals might enjoy it, I'm in that young adult range and still enjoyed Boom Ball as it's a nice showing for simpler aspects of Kinect games. Also it was just a bit of fun for a couple hours spread over some days. The levels had great variety with a number of environments to play within, fireballs were excessive, but helped clear those balls real quick. I liked how strange they were willing to go with shapes and each area presented its own challenge. Boom Ball is decently prized and has a good chunk of gameplay behind it, there's no reason why you shouldn't enjoy the game. 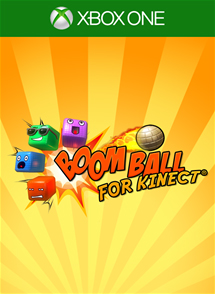