"Adventure, Quest and Mine"

It's been a long time since I last played Terraria, so I was pleased to see it being released once more on the next generation with even more additions. Right from the start I can see some big changes from the scale of the world to the actual creatures that inhabit it. There's such a large variety of living NPC's all around you. I really don't know how much was added afterwards in the Xbox 360 version as that was the one I primarily played it on in the day, but you can see clearly the vast amount of changes that have gone on. At core Terraria still plays the same as it did previously, though the worlds are much large and the zoom out is quite a bit out. Not sure I like how far out it's as I have issues sometimes viewing my little character to control him properly. The world is filled to the brim with hidden secrets to discover below as you continue to mine and thrive. Build massive monuments that cover vast areas of land and control the underground. Within many of these hidden passages lay an array of fancy weapons and certain special items that allow you to summon creatures. This is where the boss aspect comes in as you attempt to dominate these massive creatures that have a great variety to them. From floating eyes to crazy walls of flesh. It's creepy and adds to the crazy side of this game, it seems so simple and can instantly become a harsh world.

Terraria is layed out in a simple 2D platformer style that has deep mining and crafting integration. Many compare it to Minecraft, but I feel there's a greater focus towards questing in this compared to the latter. The graphics are charming with some crazy looking creatures and so many craft options are available to build almost anything. The amount of items in this version is absurd, that and creature count as so many new faces join around. Collection of NPCs is still something to do as many more are here with even some seasonal ones to have stay with you. The bosses return with some more challenges as well, which are triggered by certain events and or summoned. I would have liked a view change option as I have issues with seeing the area, but that's not a huge issue.

The online aspects work simple as you play with another friend. Among the benefits of having a cooperative player to battle and quest with, you also have someone to trade items with. This can be as simple as dropping to harvesting supplies from their world to yours very simply. The multiplayer works great with options to make it private or have randoms hop in on the fun at anytime. 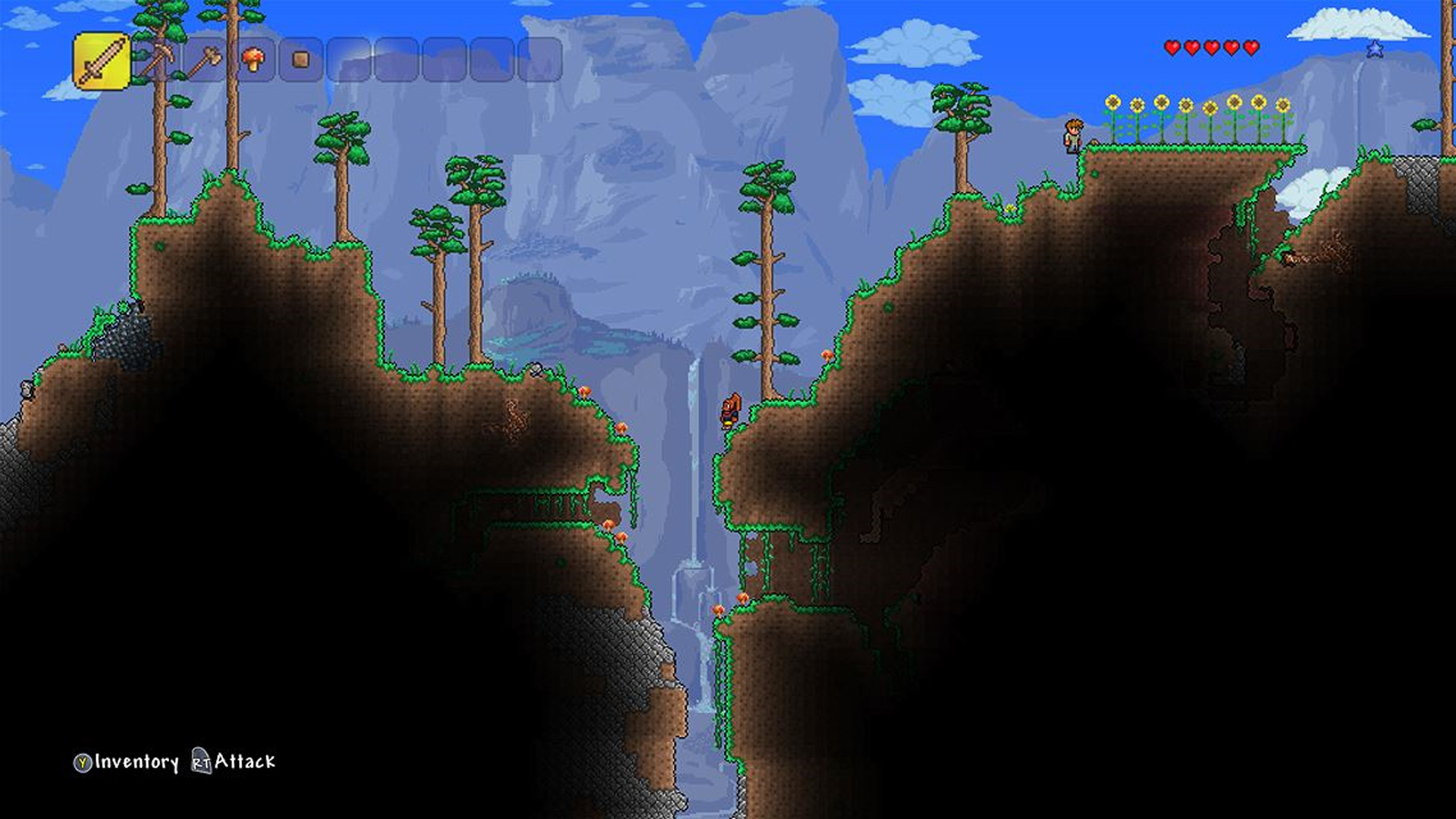 This version feels like a much more rounded and complete version of the Terraria I've played before. If you love this game then why not get it again on the newer console and new players will love the almost endless hours you can spend adventuring. Build huge towers, mine to the depths of a hell-like place or summon crazy monsters to battle. With the supplies you get, there are so many items to build and tools to gain. Gather secrets in hidden caves below and try to find a slush converter, wow. Remember that it isn't exactly like Minecraft as many say, Terraria has its own unique play and style to it that not many other games provide.