"You have two options, DIVE or KICK!"

In a world where but only two buttons exist we have Divekick! Using an incredibly simplistic yet somehow perfectly balanced fighting system you have two options of attack available to you at a time. Everyone of the many hilarious characters on the roster including now Johnny Gat! Each have their own take on how these moves are done and their own unique specials, but it's focused on this basic mechanic. This makes everyone equal at play and really gruelling as every hit is a one hit kill. Battles are of course done over multiple rounds like traditional fighting games, but one strike and it's all over. This causes either gripping hesitation or a perfect strategy to take out enemies. For campaign you do have a quick funny narrative bit and then you just fight a bunch of characters in a row until you get and ending cinematic bit. Honestly not a lot to it as most of the time you have with Divekick will be over online multiplayer or local versus. Each character does have a story if you wish to play through them all and they're unique to a degree. The level worlds are actually fairly neat within these though basic in terms of things going on in the backgrounds.

The multiplayer aspect is where much of your time will be spent while playing Divekick whether that be locally or competitively online. Matches are of course very quick and everything comes down to precision. Will that guy move, who will make a strike first? You feel very tense while playing this and it's entirely well balanced which is something many games with multiple buttons strive for. The actual mechanics of combat are the simple two button system though you do have power moves gained through combat that can be unleashed on your opponent. Additionally headshots can create a slowed concussion feeling for the other player. A final note on combat is the pre-game gem selection which can give boost to one area or have you YOLO where one hit is a sad loss of the entire match. Yet again it's all about balance in a fighting game like this and weirdly enough Divekick has it down perfectly. 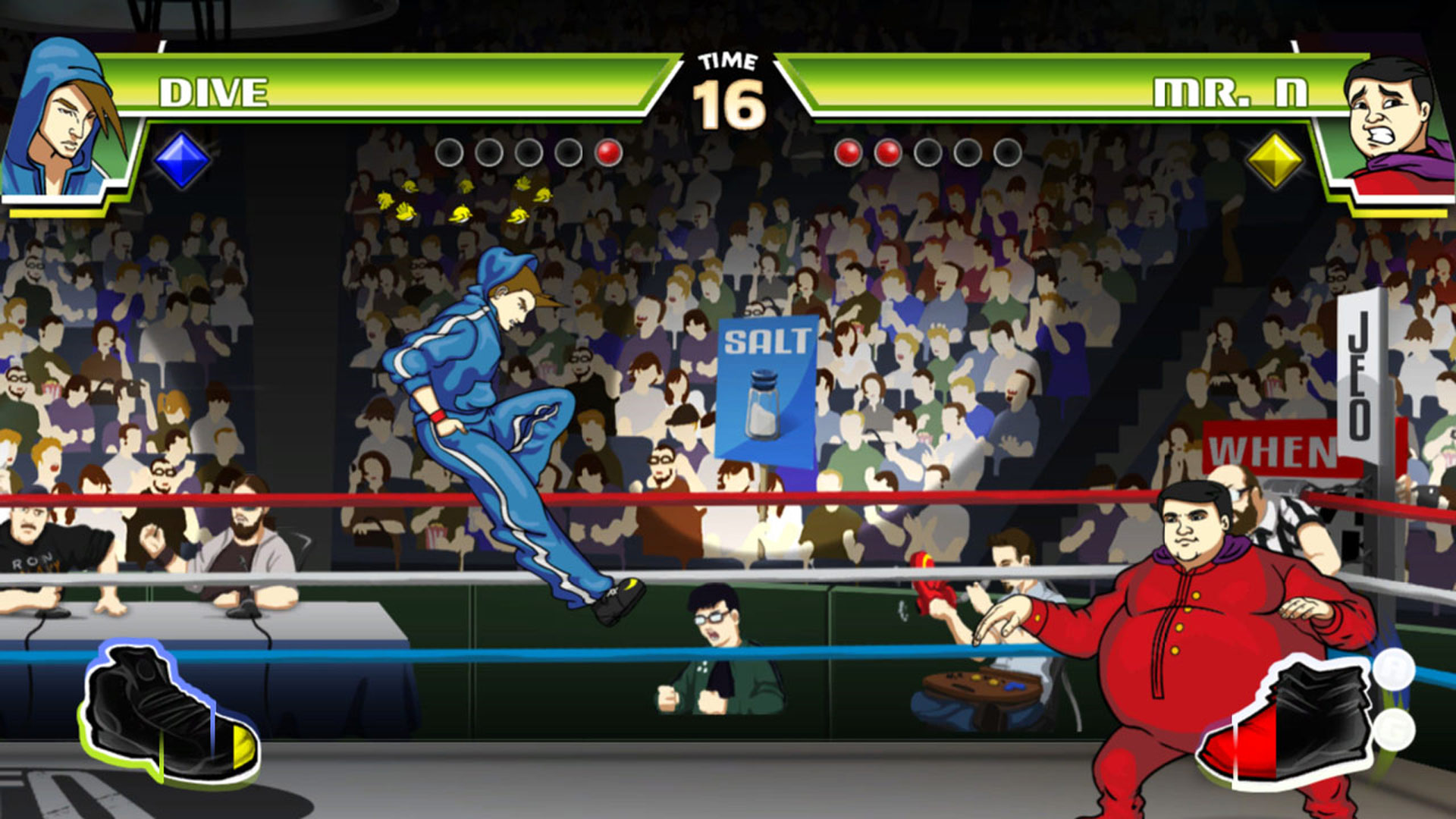 Divekick is a solid and great fighting game. There's not a ton to do in terms of unique gameplay as campaign can only hold interest for so long and then multiplayer is really where you're spending your time. It's hilarious with a great cast of characters to choose from which makes almost every match unique. The online battling is well done and gripping with local play being just as tense. Death comes quick and the options to battle are few. As far as unique games this has to be one of the most far out there selections and is definitely worth playing. So pick and choose as you DIVE! or KICK!