Red Faction Guerrilla Remastered is an enhancement effort that aims to bring back possibly the best from the series. This game was a fairly big deal back in the day being a complete package while also presenting a big step forward in destruction. While that aspect has taken a bit of a back seat in gaming recently, it's truly a grand time to jump in and destroy things once against. There are multiple elements that make up this remaster, but it's easiest to start with the story. In the narrative you're playing as a man that's just arrived on Mars to work in engineering. You're met by your brother and immediately notice that the planet is under an intense watchful eye due to a rebellion of sorts on the planet. 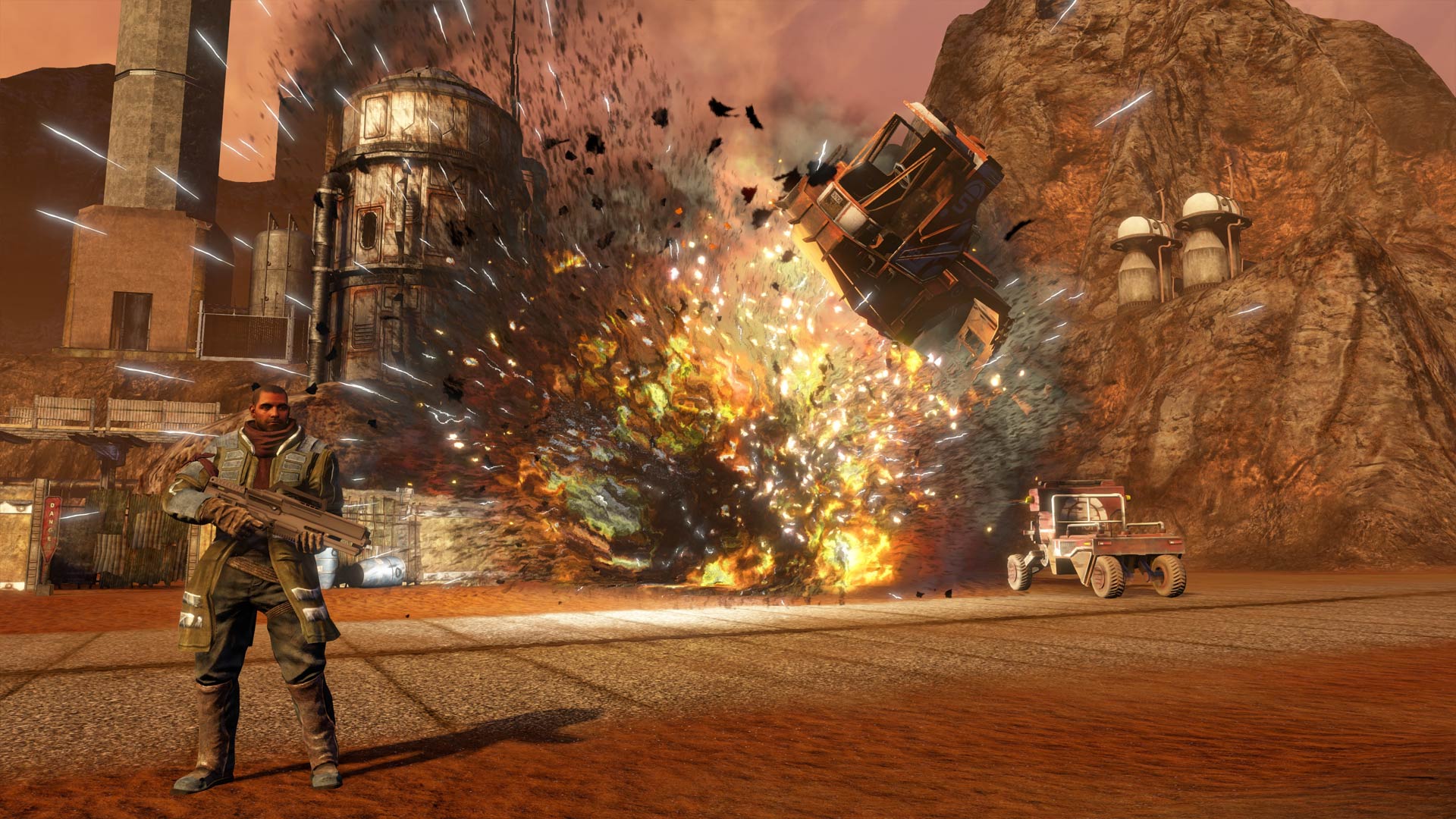 During a regular mission to scrap some old structures things go horribly wrong and then you just end up in this crew that's battling back against the controlling force on Mars. From there it turns into a battle of fighting for the surface and removing the grip the enemy holds upon the surface. It's all about completing main missions, taking part in various objectives and even enjoying some side explosion tasks. While this was neat at the time, currently I found this story to largely be based from a series of mini games as opposed to a tale with structure.

Aside from the story are a number of other modes to play within the game. There's a full multiplayer with an expansive setlist of modes to play, here players battle against one another in teams. There's straight up deathmatches and objective based options. Hopefully this sees a dedicated community as it was a lot of fun back in the day. With the multiplayer comes Wreckage which is also stacked with modes. In this area you aim to destroy structures, hit barrels or do other tasks for the best score. The final inclusion is the DLC in the form of a more structured side story following Marauders, I never played this when the game did release back in the day and thoroughly enjoyed it. It's focused and features some fun weaponry to use.

I didn't find Red Faction Guerrilla Remastered to be a huge revamp over the original experience, but a welcomed touch up. On Xbox One X you're able to choose between two resolution options of a native 4k at 30fps or 1800p at 60fps. While I usually choose resolution the fluidity of the destruction at a high frame rate was ever so exciting. The breaking of structures was excellent and it looks incredible on the modern platforms. I did however have performance problems with a number of crashes and screen freezes, I reached out about a patch and never heard back so anticipate those being a part of some areas. I encountered these most during the bonus DLC mission and it was annoying to replay whole missions as you can't save at points.

The gameplay handles well being smooth and easy to flip between weapon options. There are many choices for how you use your weapons and to select what you'd like to use for destruction. On top of having weapons you'll get a special enhancement that can cause tremors or perhaps provide boosters as a jetpack to elevate your position. A lot of gameplay is focused around vehicles and there are many to use along the way. I do suggest just using the basic sledgehammer when you can, it's a smashing fun time! 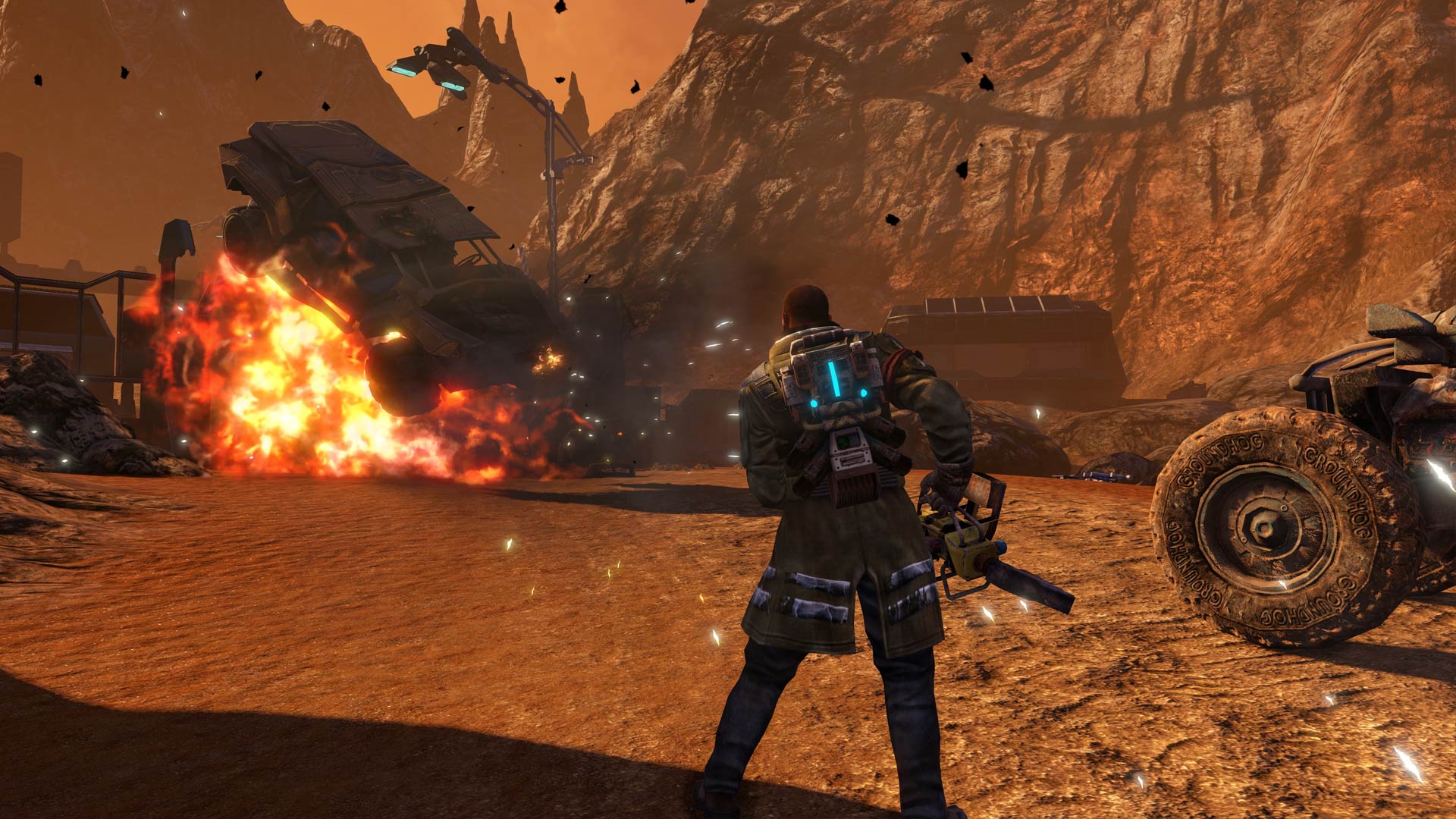 Red Faction Guerrilla Remastered is a good effort to bring back what was an excellent game of destruction while being a well rounded package. There are some performance issues present in terms of crashes, but it runs fine for the most part with appreciated visual choices on Xbox One X. It looks good, it has the entire experience and it's still a grand time. I really enjoy the multiplayer aspect and I do hope that it gets some love from players since it can be a lot of fun.

In Guerrilla you have a full campaign to run through with the bonus levels to play if you'd like and two other vast modes. The first is Wreckage where it's all about blowing things up and there are ever so many choices for adjusting the game. Following that is the multiplayer which offers many ways to play and it's all about destruction which is so fun to unleash. This is a great game and I'd love to see the follow-up get a similar treatment as they brought this back in a proper way.