The Mean Greens is a multiplayer third-person shooter where you take control of plastic soldiers that partake in five-on-five Death matches. This game takes place in wide variety of locations within different rooms of a household. Basically the Toy Story’s army men meets Toy Soldiers. Your arsenal consists of five weapons: an assault rifle, sniper, shotgun, bazooka, flamethrower, and a grenade. The game encourages players to utilize a variety of weapons at once, with more powerful weapons like the bazooka having a cool down rather than reloadable ammo. There are no ammo pickups, which is testament to the rapid exchange of death between players, where plastic life is cheap and to be thrown around recklessly for the fun of it. Weapons are quite balanced for this caliber of shooter, although the absence of a melee attack does sometimes turn close combat into a bit of a farce. There are no defined roles in Mean Greens, everyone is expected to just get in the thick of it and have a good time: a casual shooter if ever there was one.

The map aesthetic in Mean Greens is really what sets it apart from other shooters. All of the battlefields are based on the classic arenas of your childhood: the tabletop, the bathtub, the toy train. Experiencing these arenas at the level of a miniature soldier is a fresh novelty in a world where bombed out buildings normally provide cover instead of a rubber ducky. Bright colors with childish silliness dominate the landscape, and take away the oppressive seriousness that plagues some modern shooters. Each map has a different objective, with some more crazy than others. Like trying to score a goal on a football table with a ball twice the size of you, these touches at least keep the game engaging as you go through the maps. However, as the new map is chosen by vote, you may find yourself having to change servers frequently to keep your experience fresh. The map design, although visually appealing, is often too symmetrical and simple. Often games will turn into attrition, where a stalemate is the likely outcome, notably on maps like Kitchen Run where cover becomes scarce at the center of the map. Ironically, often these stalemates are only overcome because of poor team balancing, with no bots and no auto-balance implemented in the game. 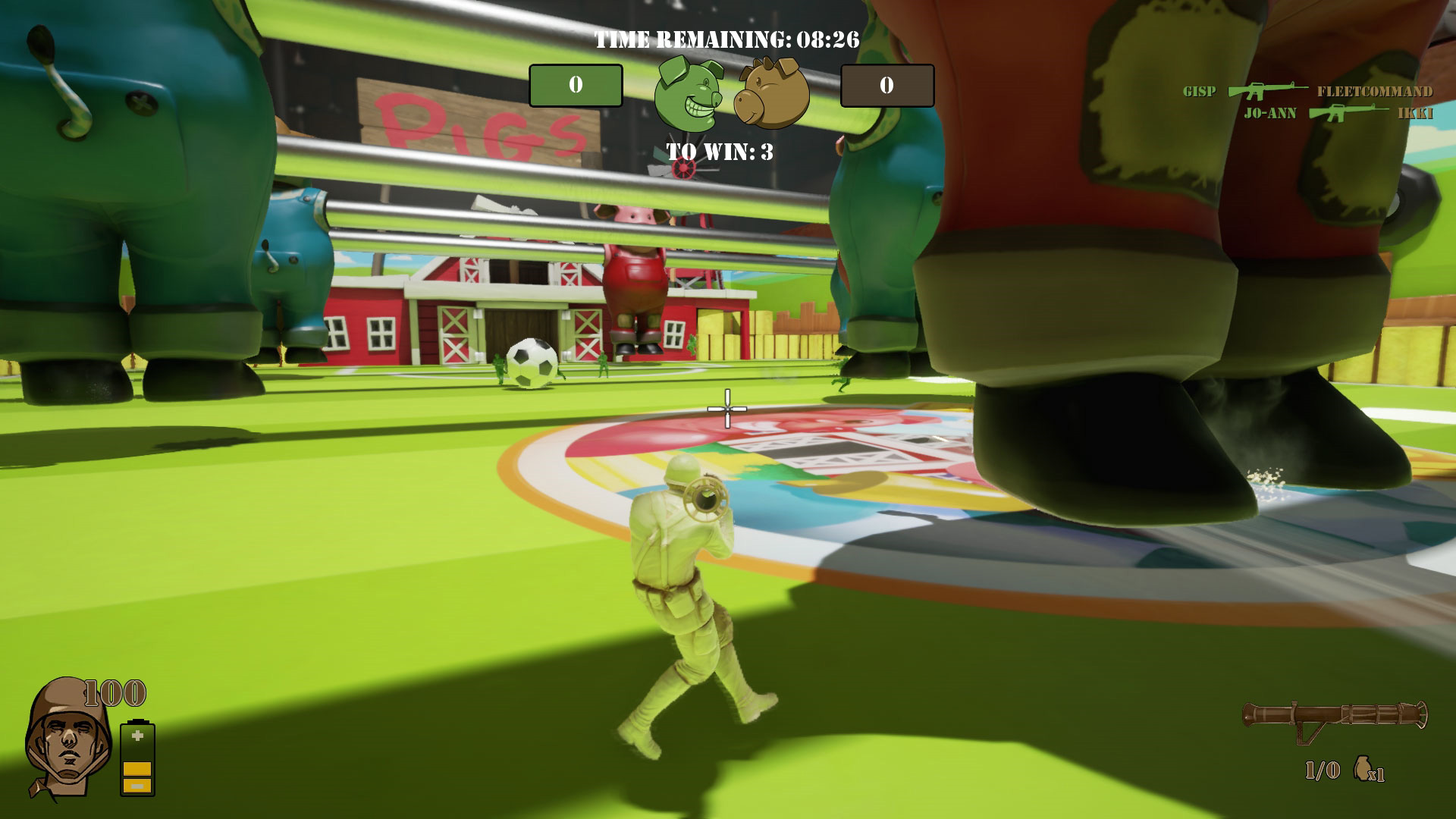 Fairly simple mechanics and gameplay makes this game as accessible as it should be, getting into the game and start sprinting and rolling while getting as many kills as you can. Starting the round with already acquired weapons keeping in mind that some of those actually have cool down so spamming and camping in one location isn’t going to be as effective as in many other FPS titles despite not having kill-cam features to realize where an enemy player is located after dying. There is no leveling system and combined with the fact that you get all weapons at the beginning, there is slight possibility that some overpowered weapons will be used most of the time. Although the availability of these super weapons are still balanced due to the cool down. Also, there is no matchmaking causing a well known issue where experienced players getting into teams with beginners will be very common. Instead of a leveling system, after every match you have voting for the next game. This is pretty handy since every other map means another game mode, unfortunately this isn’t covered by some sort of protection or punishment in case of leaving game prematurely. With that being said The Mean Greens will need more polishing and patching as well as adding more features to fulfill potential. Unfortunately there is no single player campaign, or any story elements. Keeping in mind that the title awakens nostalgia on the first Army Man games, multiplayer is all that you get. Teams are limited to five players and there is no offline mode where you could play against AI or go through some tutorials. So for new players the first couple matches on fresh new modes could be confusing while at the same time the overall quality of the match will be lowered due to previously mentioned facts. There is no VOIP available so modes that require less team coordination will be more enjoyable for majority of players. Particularly such as capture the flag or deathmatches.

The Mean Greens: Plastic Warfare is fun filled 3rd Person Action Online Multiplayer Game that really breathes life into the Army Men game genre without being an Army Men game. Players who can take the time to master the challenging control system and get over the fact that the game is only online will be in for a highly addictive experience where their house is literally the battlefield and toys can still be their soldiers.

The Mean Greens for PC