I've always wanted to try out Anno since I love building games and the whole imagination of future times is also alluring. Space is a particularly interesting thing that I love so heading to the moon in Anno 2205 was amazing. It's certainly a lot more work than I would have thought, but the journey to reach that point is a special one. The game also has a narrative to it which I thought was strange considering other builds games and might have even preferred just a side mode where you just run a city or I suppose corporation as it's called in this game with some fun settings to tweak. Back on track, the game starts out with you being able to name your corporation and pick a logo to match. From there you get a selection of islands to choose between in order to match your level of expected challenge. I wanted things to go relatively easy so I went with the simpler options throughout to basically just have a good time with it. It did take me awhile to really get things within the corporation, but I was quickly pleased with the direction the building went.

At first I thought my structured designs of doing rows would work, yet that quickly changed as I discovered a more complex building system hidden underneath. After building something like a futuristic wind farm you can add additional sector pieces with specialty items which can greatly impact just how effective it is. There are things like improving production or even sectors to cut down on the maintenance costs associated with running it. That's where the largest balancing act comes in as you need to keep the credits rolling while also providing for the people that work for you. Just like regular citizens they have needs that must be met to keep them happy and promotable which also unlocks more buildings to create. There are things like rejuvenation or large quantities of fresh produce as examples for goods you can manufacture. The needs also shift depending on the region like the arctic an extra layer of play is to keep the people warm whereas on the moon you will need to protect the structures from the harsh realities of what space brings like asteroids. This is another important aspect which constantly comes into play which will have you often switching between the regions in your control. The loading was impressively fast while switching and I loved the design presented here. It was consistently smooth and put the entire system into a viewable scale to appreciate the settings Anno takes you. You also set up trade routes from the large overview area or partake in mini RTS battle scenarios. 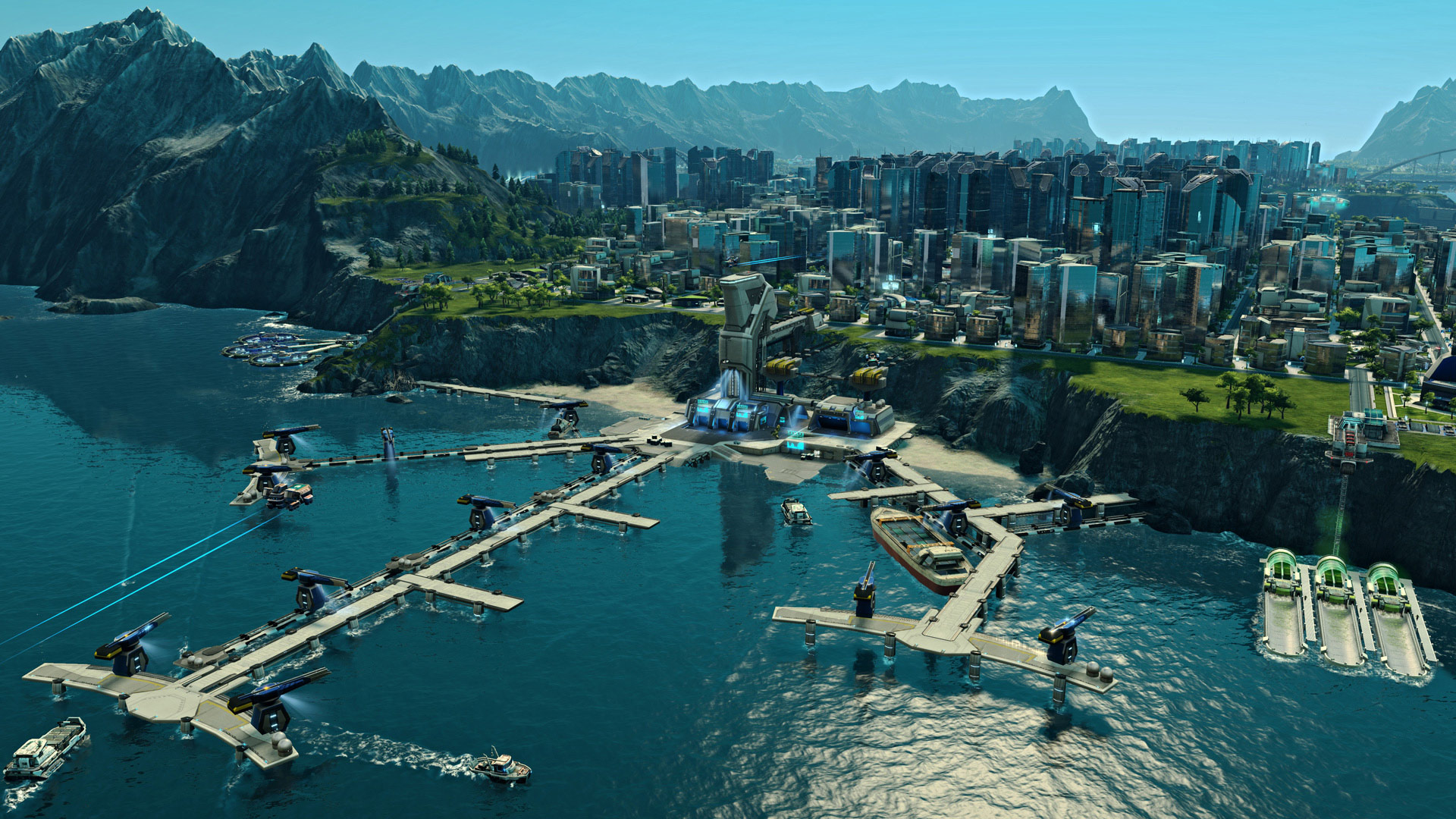 While I didn't like these RTS areas since they felt out of place, sometimes it was worth it to collect some extra items to use towards the corporation. These battles have you command a group of ships across some locations and fight mini fleets of enemies along with some land areas. It usually involves saving a cargo ship or taking a point of interest as a request from another corporation. These are as I stated previously just optional things to do so I did mostly ignore them as I was more focused on running the empire. Couldn't believe how much time I was actually sinking into Anno after taking a step back to just zoom through my accomplishments. I really liked the development done with the first area as I was growing easily across the vast islands. There was some more struggles to the later portions though I enjoyed the challenge of supporting these colony like sections. While I didn't care much for the story elements present I will say that the open structured campaign was a neat take on the genre and progression to the space program was a fantastic journey.

Anno 2205 is a really beautiful looking game, from the gentle oceans to the soft snow of the arctic. Was really impressed with how detailed everything was, you can zoom out a fair bit and then go right into the close action. Futuristic cars fly around in the air while people regularly walk around on the sidewalks and even the natural areas have life as I saw some deer walking around. That was of course before I flattened the area for an education center to please the people, but nice all the same. It was also great to see Anno take advantage of not only land, but of the sea and mountain ranges as well. Buildings can be placed along the coastline to take advantage of the sea or you can mine the hills. The details of these structures are also just as great as the small people with each of them being completely unique. I also liked the look of the UI though felt notifications were being a tad pushy at times and kept encouraging me to engage in some of the other side missions present which I wasn't too interested in working on. 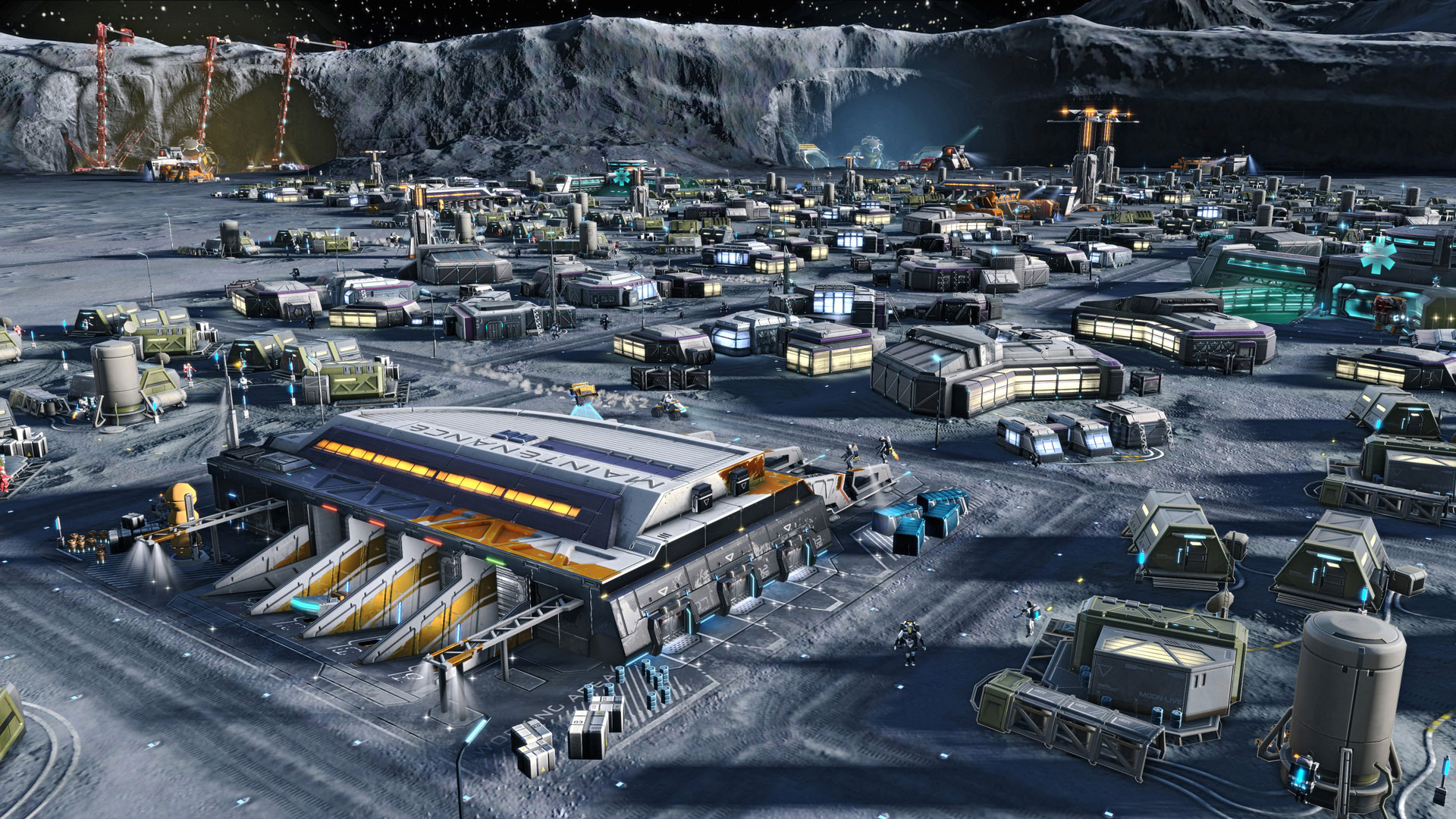 I was pleasantly surprised with Anno 2205 and feel it captured the futuristic design of city building like games perfectly. The landscapes you get to build on were completely unique while constantly providing their own challenges. It was also really in-depth in just what you could do within the game from upgrading structures to controlling the trade routes to gain maximum profit potential. While at the core you're a corporation it's all about the journey towards the moon and pushing your employees to the limit. I didn't really care for the RTS battle parts since they felt out of place though I'm sure some will enjoy and it might have benefitted from less story elements though I did really enjoy playing the game. Fans of the building genre will definitely enjoy this if they haven't played this and fans will also like this next part of the Anno franchise.