I was surprised a bit ago to see that Edge of Space was finally launching since it had been a couple years before that I had been in a press session for the title and assumed it was already out. I was more curious than interested in seeing what eventually became of the title. Back when I played it the world was much simpler with grey suited astronauts and there were many promising innovations. Fast forward to now and I feel like the title came out too late or just generally lost its way over time. You can now create a wacky character with a fairly decent array of customization options and then set out into a world where a floating shark gives you a hard to follow tutorial. Think of a game like Terraria, but in space though you don't really fly anywhere as it's all landlocked. Back when I played the title it was so promising with the concepts they were building and playing the finished product I feel they simply didn't do enough with it. The game itself was hard to learn since the tutorial gave literally no guidance and system for building things had a grind factory to it. While there were neat aspects to be found as you continued to progress and work at it, it still felt ultimately underwhelming. When playing I was just in constant wonder of direction which really wrecked by ability to get into the game as much as I wanted to. Felt there should have been an easier to follow system to at least get you going as like many others I'm not entirely interested in throwing hours in just to get started at a base of play. While others I've viewed and looked at for my review had some fairly complex systems it looks like many hours were invested to get anything basic going as well.

The world itself that you visit is incredibly hostile and right from the start is constantly trying to kill you. I wish there was a bit more freedom at the start as you could barely explore without getting destroyed by multiple enemies in every single area. If you do manage to dig down or fly to a lower area there's radiation among other problems that occur to further kill you. It was neat however to fly across various floating rock formations which float over the planet's surface, but mistakes could turn you into a burning comet of death very quickly. The actual graphics had somewhat of a cartoonish charm to them, though some areas did look dated to an extent. I also had some issues with the backdrop which from whenever I played seemed to be a relatively static backdrop with some neat parallaxing effects though that repeated pattern was annoying. Unsure if that was just an effect of playing at a higher resolution on the large monitor, but it wasn't appealing. Movement itself is fairly simple and the basic tools do get you off to a decent start, but I still didn't have much focus when playing and probably spent too much time exploring out. There's also a multiplayer option though it was hard to connect with others and I got an error most of the time when attempting to connect. 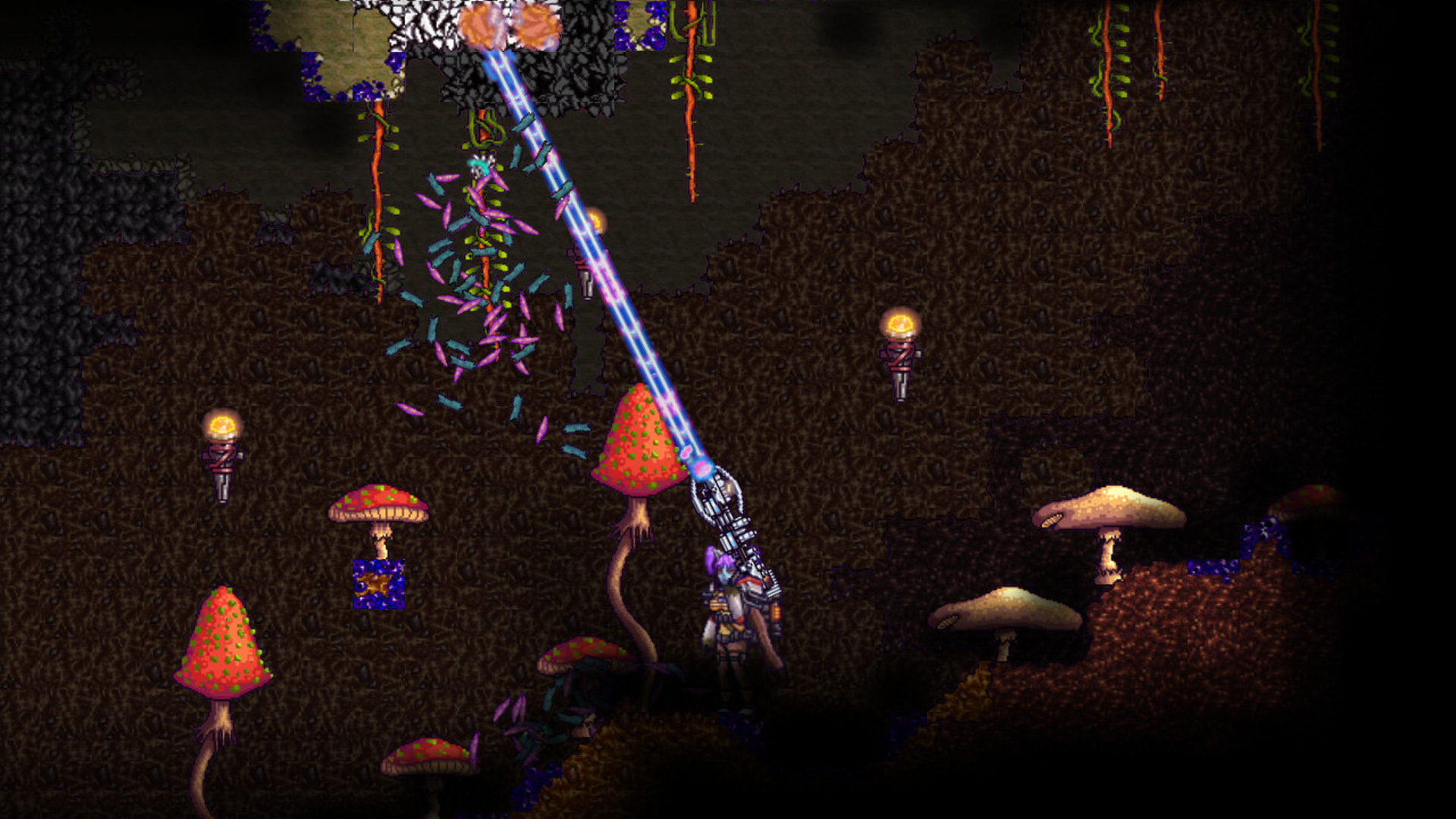 Edge of Space is still a decent Terraria like title that brings a bit of a space element to it though you're largely grounded for the game. I liked the basic mechanics, but still felt like the final release was of a dated title that had shown promise a couple years ago. While I did enjoy playing some aspects it was still a rather hard title to get into and I never reached the full potential for my odd colored space person.

Edge of Space for PC
Review code provided by Reverb