"He Must be Jam, Jelly don't Shake like That"

The first thing I had heard about Axis Football 2015 was negative and I looked into it further across some articles though I really wanted to check it out for myself. After all, I can't even recall the last time I saw a football game available for PC. Even if there really isn't anything to the game it would still be nice to play football somewhere else other than the consoles. With Axis Football we're given this almost goofy roster of teams from the United States and you basically just play football. There's no licensing which is fine and you play with some hilariously named teams across a fun game. For game modes there's sadly only two available with quickplay and season. In quickplay you obviously just hop quickly into a match to play, will also mention there's local multiplayer as well. Would be nice to see that get expanded to online in the future though not a bad starting position. In season mode you just play a season in the Axis Football league and eventually reach the play-offs. This mode is rather bare bones and there's nothing to it aside from a continued series with your selected team. That's currently all the modes within the game which is disappointing as even a "Be a Pro" section or maybe some sort of extra modes could have been added in, there's a coach area coming soon though not included in this review of the original launch game. 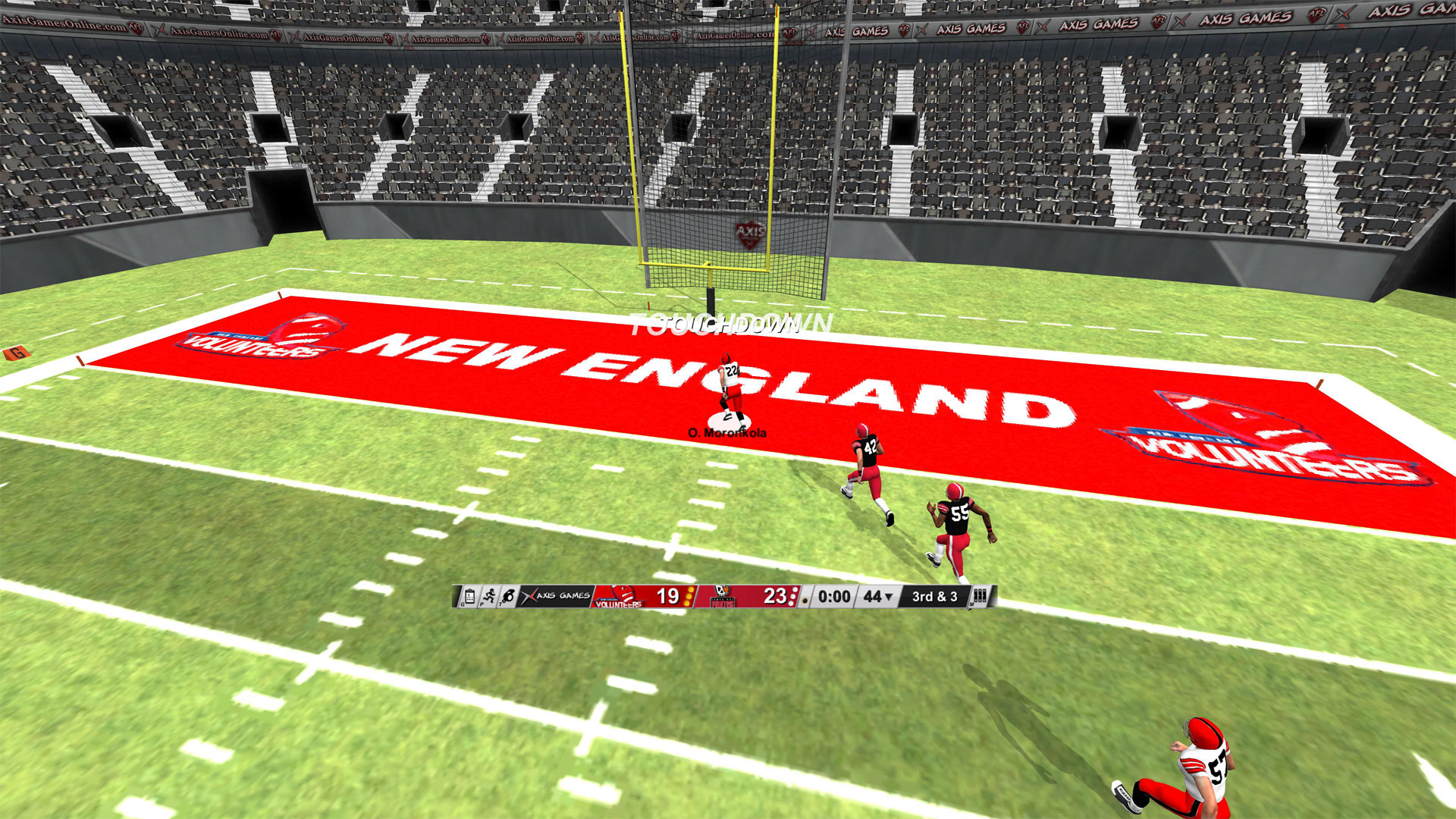 I'm going to assume this section might be a bit longer than usual since there aren't many campaign aspects to sneak gameplay discussion into. With all matches you play two halves of five minutes, no customization available and no pause menu which was not cool. The actual core of the game is structured well as they have plays set which I would compare to Madden though nothing happens once the balls snap. Many players just sort of stand there or get glitched out of play. I wouldn't suggest even attempting to throw the ball since I got intercepted every single time I did it, no seriously. I loved the whole mouse selection of where to throw, but honestly I just gave up on it since running is essentially an easy touchdown almost every time. For plays I would say there's a good amount of them for selection and that aspect if done perfectly. Defense actually works well on its own though again many players get just stuck or are very unaware. Animations are also very stiff for all characters and touchdowns have no flair to them, the player just walks away. The audio within the game was hilarious and the commentary from the broadcaster was great though much too repetitive, really just needs more lines and it would be perfect. Another huge thing for me in any sports game is the arena you play at, most sports are about the crowd and outside the Axis game field it just sucks. Everyone is a grey flat stick figure and the stadium is largely empty feeling. It would be great for some advertisements, even fake ones or announcements to run across places in order to get it more lively. Also crowd noises are there, yet you barely hear them which is again disappointing. 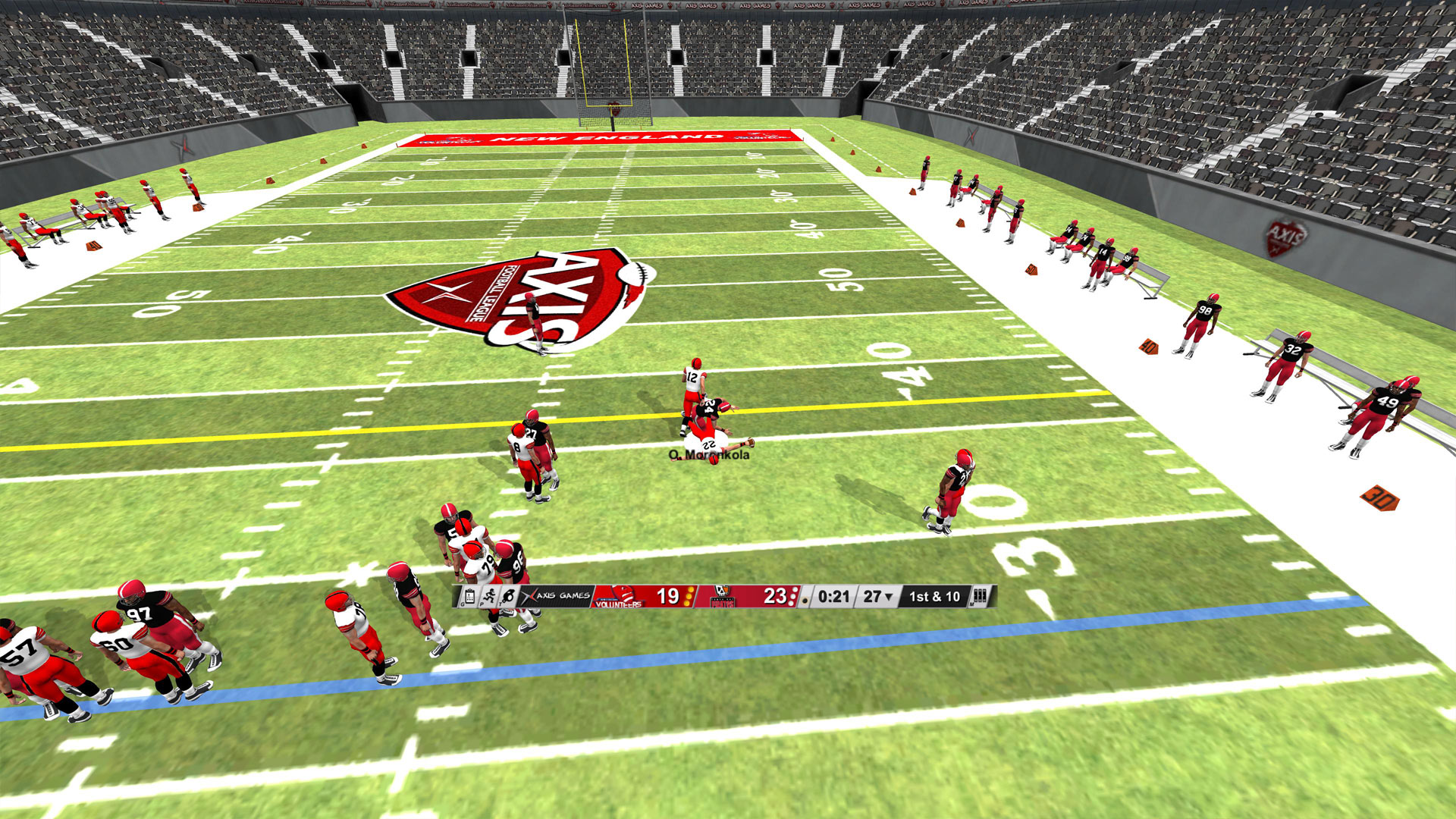 Axis Football 2015 does run to an extent despite the various glitches that are present throughout the game. If you love football and want to play it on PC then this is your best shot at the current moment. I never understood why developers never tried to make football or even sports games for the PC and I think this game is a step in the right direction to seeing more of that. I hate being completely negative though I need to be objective when reviewing the title. Again, aside from the many issues and lack of life to the graphics/stadium this game does work for some solid football on PC. Hopefully they keep at it and we see some improvements over time towards a better football game though right now this play like an ancient broken Madden game that has little too it.