It's time to join the guild, the guild of dungeoneers where you build your squad of creepy characters in order to take on the dungeons. Using gold which is collected from the various dungeons you venture within you're able to expand and build upon the home guild. This guild is where you field potential dungeon crawlers and give them upgrades for within those dungeons. My particular guild home had a main section for rooms, a workshop area that provides various bonuses and of course the graveyard for fallen dungeoneers as they do parish often. Once the setup is complete and you've spent your bounty you select a new dungeon to explore from the overview map. Many of these dungeons are often multi tiered so that you go back into the location multiple times in order to fully clear it. Once you get into the dungeons you're give a set of tiles where objectives are and it's up to with the various cards you receive each turn to get there. These tiles vary from set pieces, to enemies and finally reward cards. Each turn you can pick three of these to layout across the board in order to create various paths. This really keeps things unique within the various dungeons and even the same levels since every time you play differing cards are given. 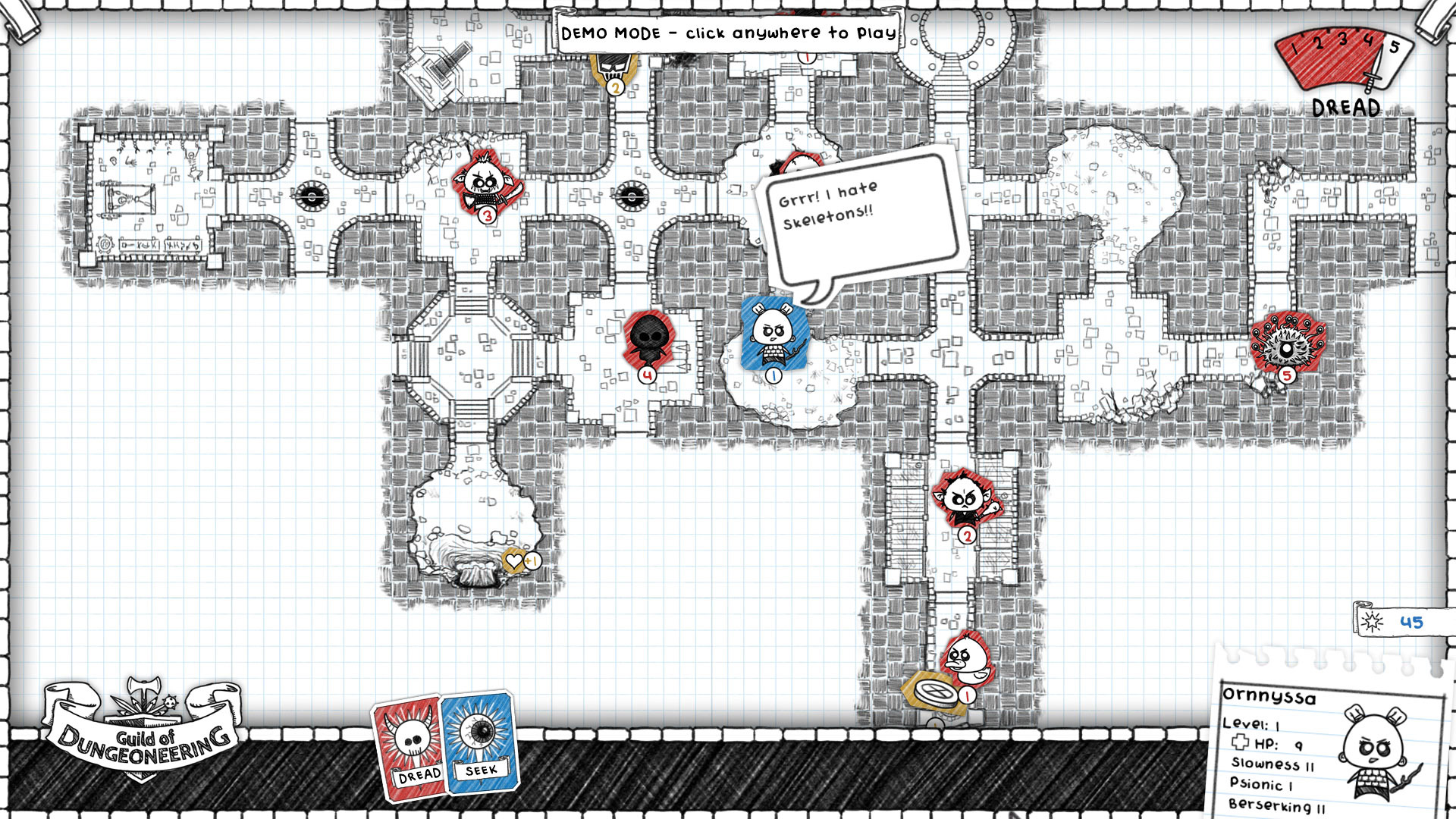 It's a good idea to build up your own character level since death comes easy and the level of each character gets reset each dungeon play along with their armour. I wasn't a fan of that aspect since I though it would be better to keep progression or even loot you receive though I guess it was simpler to just reset it for every venture. Eventually and often you'll enter a tile for combat which is actually a really neat system of play. Both you and the AI get a selection of cards where you make a selection to counter. This is done in rounds and your hand is directly affected by the equipment you've found in the dungeon thus far. This could be everything from weird hats to a random stick which help build the deck. Combat was definitely unique in this title though also very stressful since any random play of their card could instantly end your run. Though if you do survive and take out the boss within that area as there often is you'll get some gold rewards to improve your guild space. 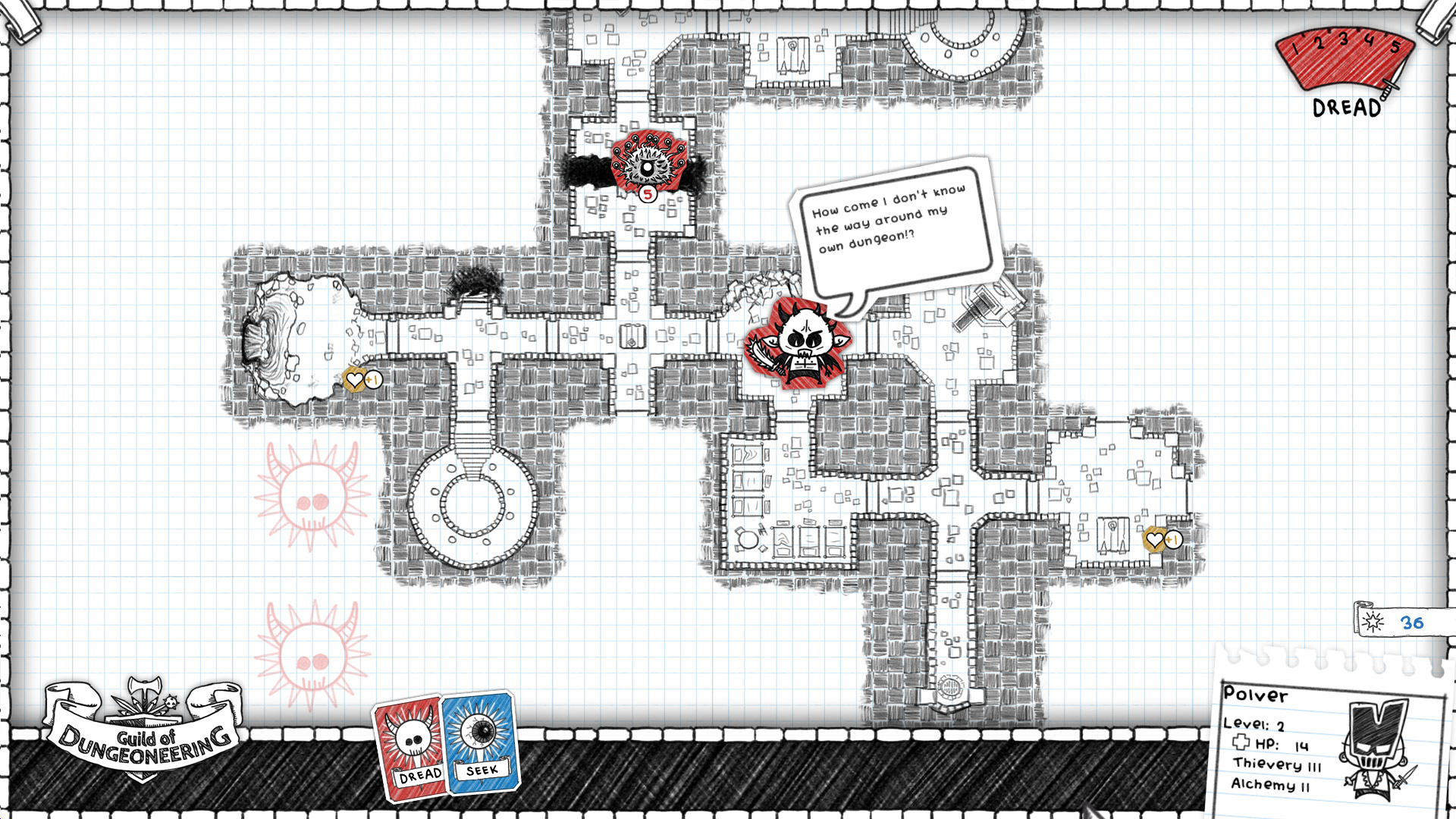 It's a simple strategy game which I thoroughly enjoyed controlling while directly or during breaks while on console games. It's got some interesting sounds to the background and music that was well done as well. Everything within the game is relatively simple and card placement is not complicated so anyone can hop into the action. I didn't quite like how everything reset each dungeon as my armour and loot would have been nice to bring forward though from a technical side I can understand. I also hated that the game had an auto move system so you don't have any control of where your character is headed. Sometimes they go right into the best spot whereas others they move to unnecessary spaces. Back on track with great aspects aside from the neat card system was the graphics. The whole cartoon sketch style of art was fantastic for both the worlds and the highly entertaining dungeoneers. These little characters all have some personality quirks to them so it was sad to see so many die within the darkened dungeons.

This is a great game that you could focus on entirely to play or casually get in rounds while doing something else. It's got great structure to it with only minor aspects holding it back. This includes those couple I mentioned and other aspects like how repetitive it does tend to get. While it's great moving through the various areas and taking out enemies the refreshing of the character each time can get boring. For awhile this will definitely hold your attention though I can see that fading after many hours of gameplay as it just doesn't mix things up enough as it should be. Still, Guild of Dungeoneering is a solid and intriguing game. Those sketch graphics are really awesome and the character quirks are great.