Have played the long term beta for LEGO Minifigures such a long time ago I was quite joyed by the announcement for the full release of the game. This was a game I enjoyed for a bit while trying out and more or less was awaiting the proper release to go further. Another neat aspect of this particular game to comment on is that it's also available for both Android and IOS aside from PC which is the platform I'm reviewing this on. Another comment I'm going to make before getting into it is that this was originally a free to play title with an idea around buying Minifigures in the real world to unlock them in-game, I actually like this idea since my family collects the best ones from those series though I can appreciate the change to a full purchase title. This will be better for the younger ones since there will be no gates blocking them from playing with all the characters. After all you can clearly tell the market audience for the game though being an adult I enjoyed it as well. The game is a completely online experience where everyone plays together at once though it really doesn't perform well for communication and I'll go over that in the gameplay area. The story aspect is built into this overall narrative experience which takes your minifig on the quest to become a hero as they gather a team in order to save the various LEGO worlds. These worlds include Pirate; Medieval Space, Mythology and Dino which each have their own vibe to them aside from some cross-over enemies that appear. 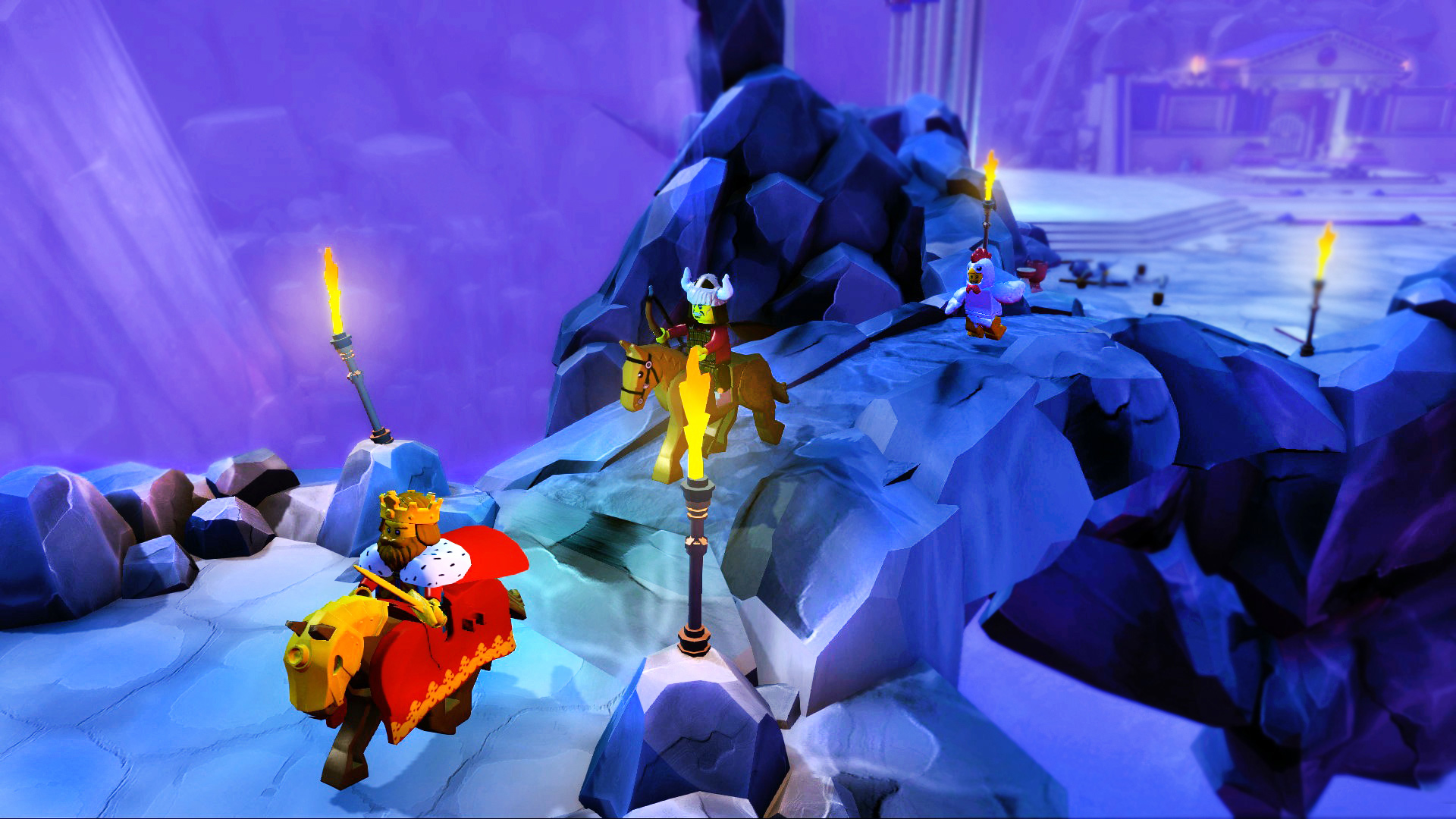 The general story was decent though a tad on the happy, every single person is mis-understood concept which doesn't go to teach kids that there actually are bad individuals out there. The game is structured largely in a linear fashion so no one should get lost when playing and it does properly funnel you into areas. Along the way towards general quests are side dungeons to take on for minifig unlocks or special events that take place. These include things like collecting apples for granny or clearing the beach. These side events work well though I have a huge issue with the dungeons/main narrative in its level gated system. This prevents progress since I was constantly too low for progression to areas and would have to grind out enemies for sometimes up to half an hour in order to level. That was boring and disappointing since I like to keep a brisk pace going. This was however only the case when playing as an individual, whenever I went into a group the level system seemed proper. I felt this was strange though perhaps done on purpose in order to keep people playing with others. Still, did not appreciate being locked in areas and being bored to grind out levels in order to progress or access areas. For end game there's also a sort of challenge area which spits out random continuous levels in a dungeon like style. This is meant for groups and one of my favorite runs was a group of four where we did a really decent job of moving through the areas. 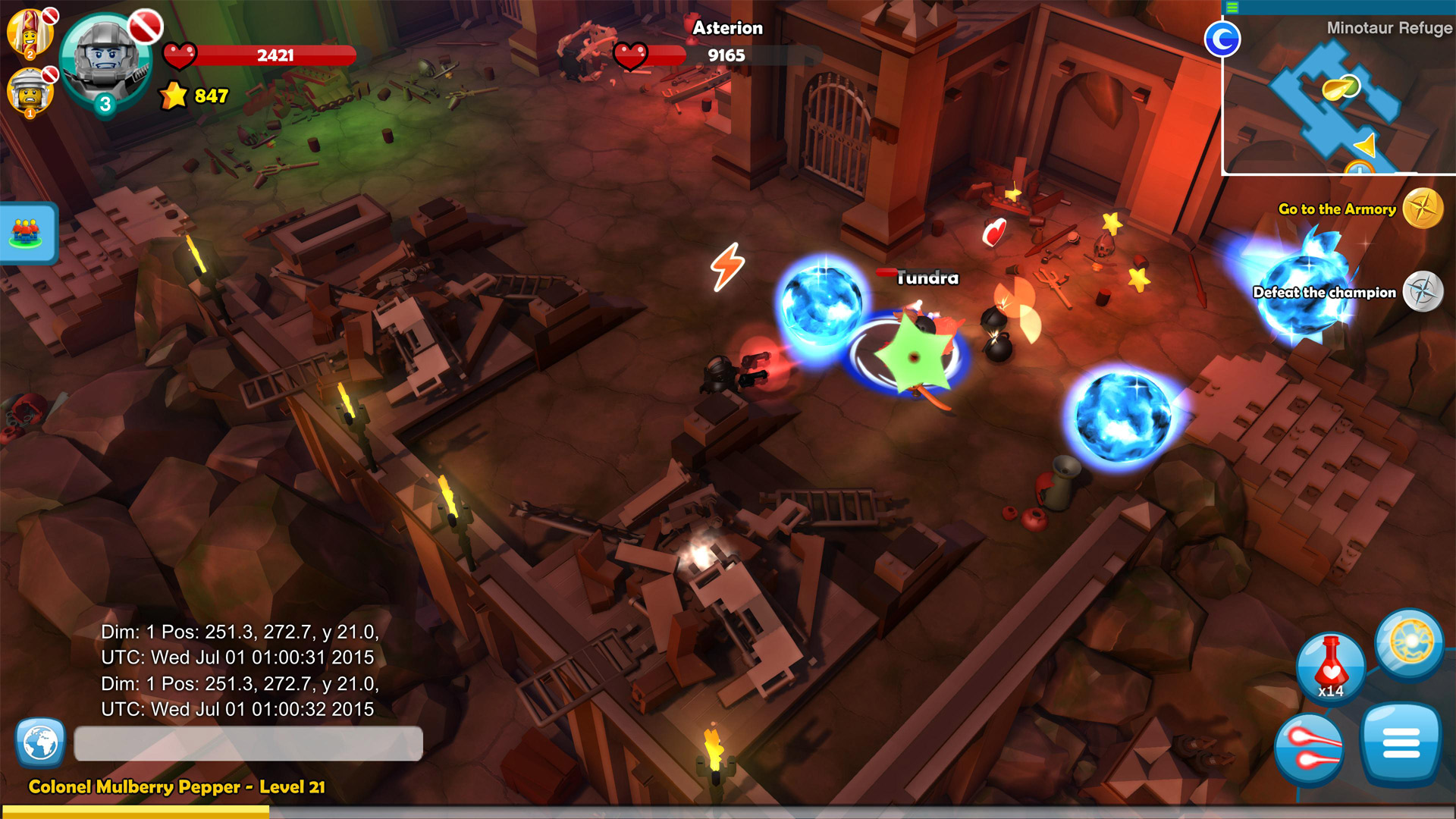 The game looks very authentic and true to what LEGO games should look like. Everything is played out in a simple style where you have a primary attack, a secondary special attack and health. All movements can be done perfectly well on keyboard/mouse or touch since it's available on the mobile platforms. I do wish there was some more style to the minifigures but I imagine that would have been a ton more of animations. Within the levels there's a good amount of variation with the locales though enemies come up a tad too often across the worlds. Another problem was that certain areas felt overwhelming by myself since things just kept respawning almost instantly against me. So at points I was fighting hordes which was harsh for the three man LEGO minifig team you get to control. These characters can be swapped to your liking in the there spots with other minifigs you find. Though this doesn't quite allow full selection since certain areas can really only be done with the proper matching crystal ability that each figure is paired up with. Some dungeons need the tech characters with a wrench symbol and numbers scrolling whereas other are for darker minifigs. Strange for me and a not a favorite idea since you can't be whom you want, but a good way to switch things up. I would also have to say another huge complaint for me is the chat and party system. For partying the weird names you create were hard to party with since you couldn't easily tell whom people are as usernames are not used. For the chat system it was pretty much un-usable since almost every practical word is blocked, hard to battle and communicate when my vocab is not allowed. I'll go on to say I wasn't swearing or using harsh terms, basic words were being blocked and that's not cool. I get it's a children's game of sorts, but you need to give them some room to chat and learn a bit since it's an online game. 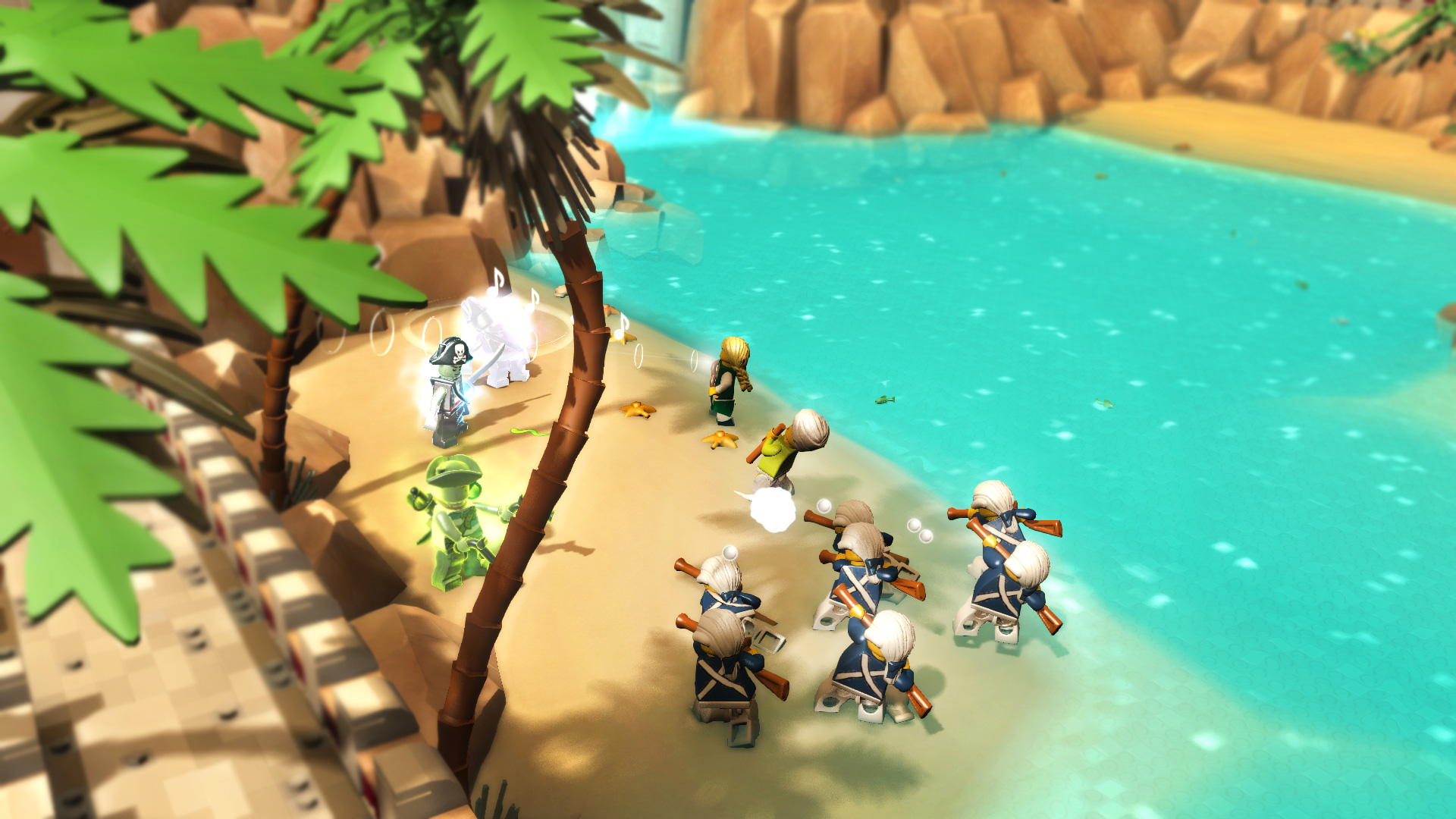 I realy enjoyed playing LEGO Minifigures Online for the most part and if you like LEGO then you probably will enjoy it too. It's rough playing by yourself though the servers seem full for the time being so it shouldn't be hard to find others. There's ton of minifigs, worlds and things to do with the online world. I was pleasantly surprised with the overall campaign and the load times are quick which is fantastic. I've had some issues with the game as you would have seen above though generally everything was great and this is perfect for kids. They will get a great many hours of gameplay and there's lots of end game content to enjoy.