This War of Mine Review

This War of Mine attempts to paint a blank and dreary world from the perspective of citizens trying to survive admist a local war in their region. Admittedly at many times I felt this to be an apocalypse simulator in terms of exactly of bleak the area is and dark shading graphics that surround every area. This took away some of the emotion from what the game was trying to create, though I had a great time with it anyways. Things are rough in this area and buildings have been just torn apart from a number of differing causes. Your squad is thrown together and changes each playthrough as you attempt to guide three individuals to survive. I'll say it's immediately rough and things are already desperate as you try to make it in this fairly destroyed shelter. No matter how you divide their attention you spend the first bit of your time scavenging the close area for any supplies that can help. From there you try your best to balance what supplies you have in order to create items to assit the struggle. Whether that be beds for sleep or some better benches to create helpful tools. I was pleasantly surprised at the depth the crafting system had with what sort of contraptions could be built. If you need water or other items such as a shovel you're going to have to build certain trees of work benches. These benches are then levelled with more supplies and then you're able to build even more things. This may sound simple, but it's a real struggle balancing this as you also need to keep everyone going. People are sometimes sick, injured or generally get fatigued while surviving. The worst is depression as they just get all whiny, but it makes sense after things that happen. The game is like the Sims in a hell torn land. 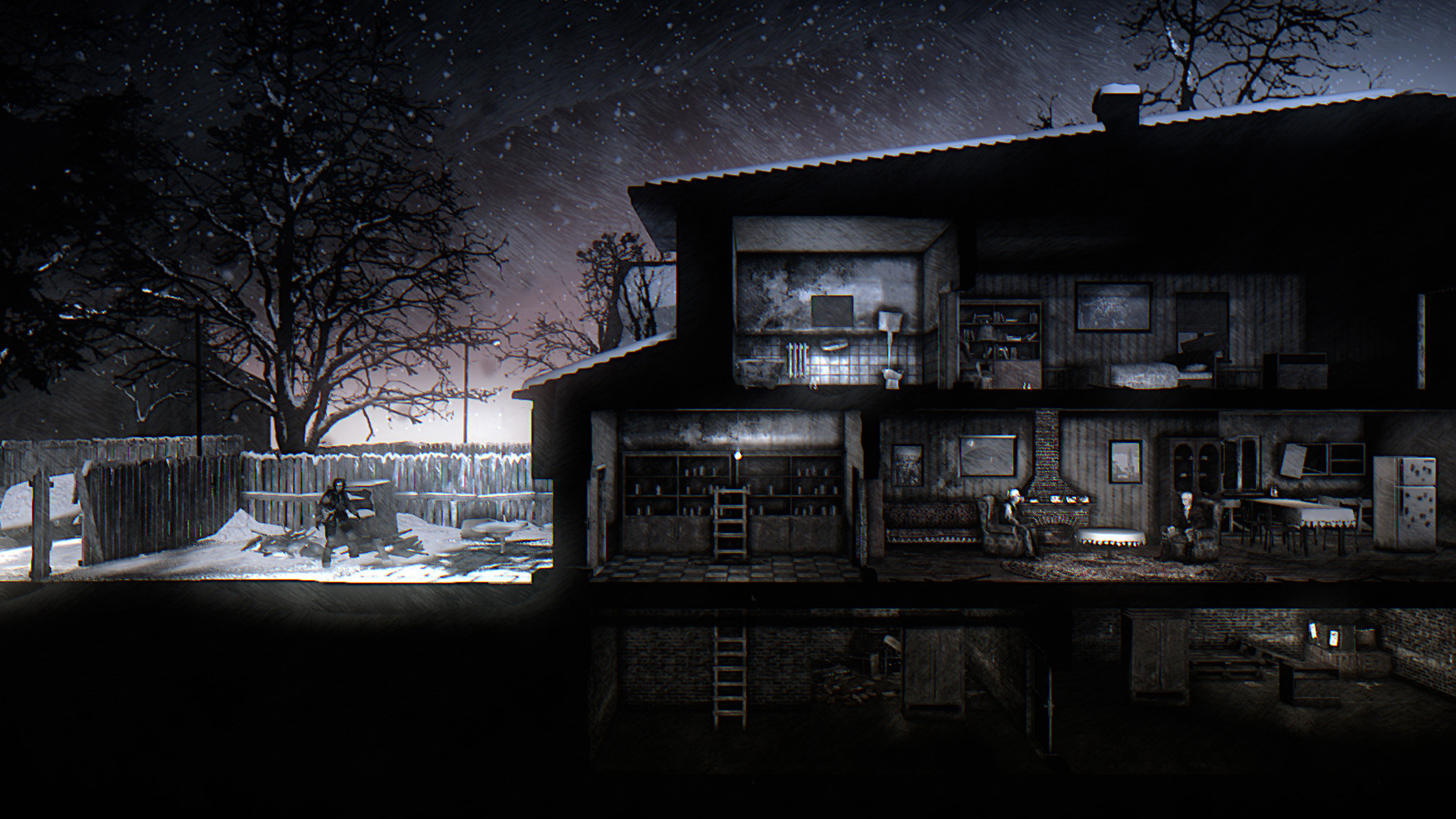 Time passes and things change, though night time is where a huge mix-up in the game comes to play. At night you must assign positions to your team from guarding, to sleeping and throwing out a scavengar if you dare. I went out each night checking out locations I thought were safe like I'm sure every other player will do. It's just that at some point and so many days in you need to get more reckless in order to bring back good bounties. Some buildings are full of militants or shady folk that aren't great to deal with. You could trade with some, though others will chase you with gun fire. I just needed food really, and got beat up by a gang in one of my attempts. It's rough out there and you need to play it safe, stealth also helps in this though sometimes this place is just desolate. At one point I even had to steal from this old couple in a rich house in order to get food and the emotional impact on my group was awful. Traders also come at times during the day while you're working away though they are usually high way robbery. Additionally some small events happen which you can choose to assist other survivors with to perhaps get some reward for you.

Eventually things always get bad, despite the best intentions the squad wears down. People will most likely die even in secure areas from bandit raids at night if you're not well armed to just injuries that occur in living. Rest is hard to come by and even with three hard workers it's a tough balancing act. The real question is whether you can get anyone to survive the chaos in the world all around you.

Everything is simple to control with a point and click style of play. There isn't much in terms of story and the tale you craft is through experience. I loved the atmosphere and graphic art style which felt much like Deadlight. It feels more like an apocalypse then a war zone, but I get it. Supplies must be balanced and I was pleasantly surprised at the amount of things you could craft. There was just so much depth in moving in the world and tools available to attempt surviving it. 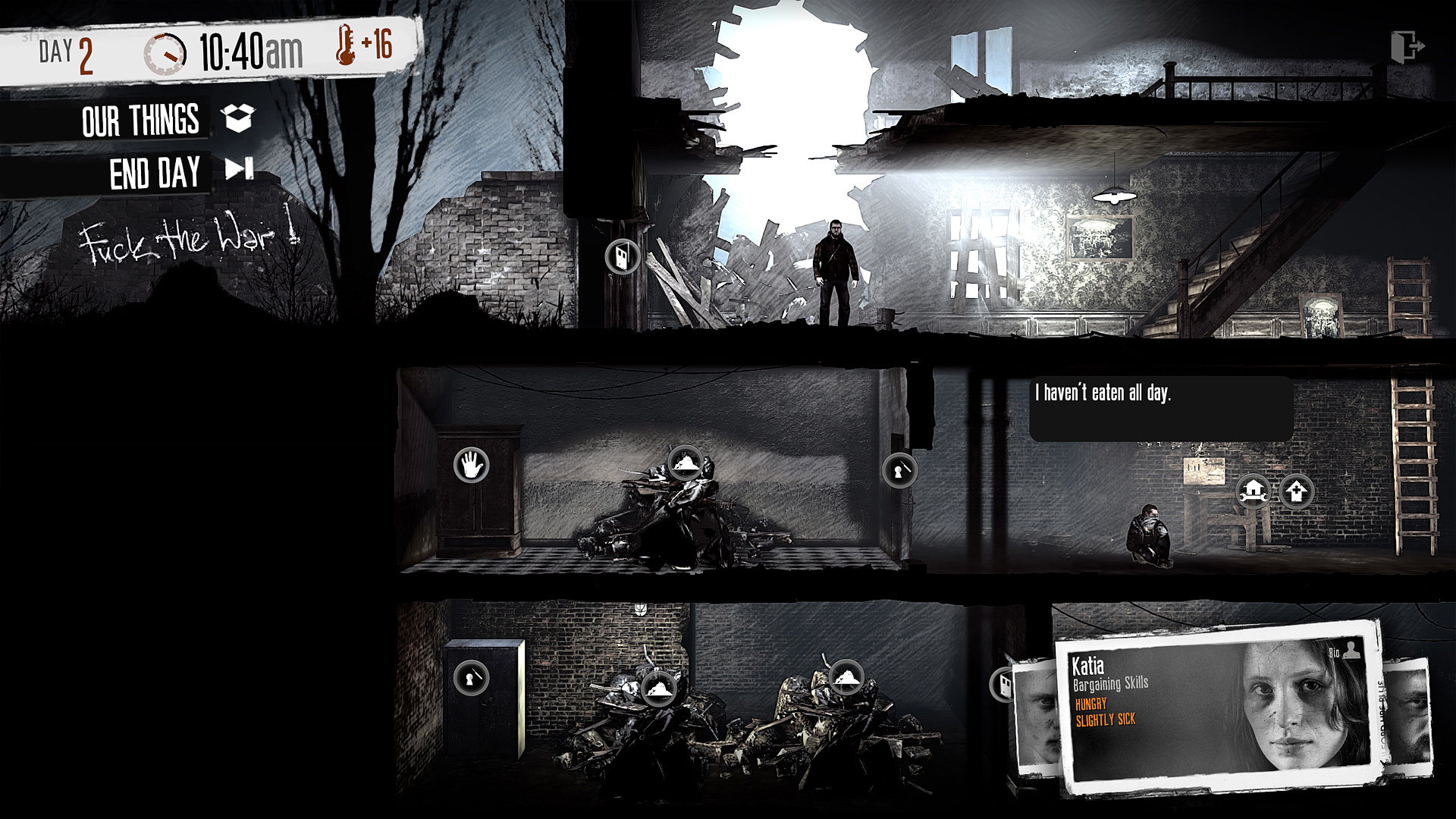 I get what they're trying to show in this game and the world it paints is rough. It can be very rewarding to bring back supplies after a night of scavenging to only have absolute defeat with someone succumbing to their wounds or a tale of raid that happened while you were gone. If you think you can handle this rough world and balance these lives then best of luck. This War of Mine is an amazing survival game and one of the best offerings this year. Craft; live and survive the best you can in one of harshest areas.